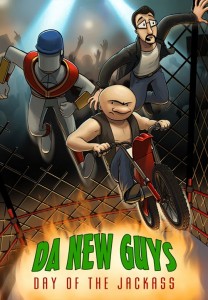 *The limited edition will only be available through March 7, 2012*

Overview
Da New Guys: Day of the Jackass is a point-and-click wrestling themed adventure created as a sequel to the original title “Da New Guys”. After its release in 2005, the game had proven as a difficult puzzle for many gamers. Seven years later the guys from Icebox Studios finished with another challenging product. Let’s dive in and see how their newest creation holds up.

Story
We begin our journey at the Wrestle Zone in a match for the championship title belt. The main characters that we meet are Brain, The Defender, and Simon who make up the team called “Da New Guys”. The match has already begun with Simon and The Defender tag teaming their opponents in the ring. Meanwhile, Brain is outside the ropes wandering around aimlessly talking to the crowd. He cannot grab the title belt while the brawl is going on in the ring, so Brain must use his own brain to knock out his opponents. Using a wooden table in junction with the ropes, he is able to spring the table into the ongoing battle. The brawl ceases, and Wrestle Zone becomes silent. Brain enters the ring and notices that his own teammates were part of the collision and were knocked out in the process. Not too concerned Brain snatches the title belt and officially becomes Wrestle Zone’s champion. 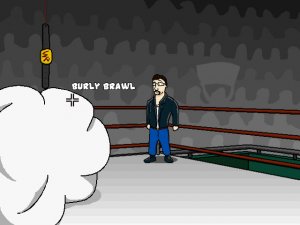 After the upset, the crew heads back to their apartment/bachelor pad. Brain’s gloating is short lived when a mob of angry wrestlers shows up at his door. The mob wants Brain to give up the belt immediately; however, no one can agree on who gets the belt. Using the confusion as a distraction, the scrawny wrestler goes back into his apartment and climbs out on the building’s ledge. Screams erupt from the window behind him, but Brain faces a new problem – getting down. He manages to move to another apartment window and enter the room unseen. By outsmarting his neighbors, he is able to navigate out of the adjoining compartment and passed the angry mob to the parking lot. Brain walks a few steps when Ice Cold – an over-sized, dimwitted wrestler – calls for him to stop. Unimportant babble is interrupted by a van recklessly running over Ice Cold. As the van’s side doors open, arms quickly snatch the champion as the vehicle leaves the scene. The only evidence left for Brain’s friends to follow is a part of a Wrestle Zone ticket.

Who is responsible for abducting Brain? And why? One thing is for sure, Simon is not overly concerned.

Gameplay
As with most point-and-click adventures, the trials faced involve environment interactions as well as item manipulation. In order to find out who is responsible for Brain’s capture, players will have to complete plenty of mundane tasks. Additionally, minor setbacks will plague the player whether that be opposing wrestlers or just being unlucky while holding an important item. Having an autographed picture stolen by a fellow wrestler is especially annoying.

Each area will have an open/exit point which guarantees a player will not become trapped. Beyond getting physically stuck in game, there are moments when your character cannot move forward because of an equipped item or puzzle that needs to be solved. While adventuring as The Defender you are able to take the remote control from Simon in the apartment. Until you are able to replace the remote, you may not leave the apartment because Simon will continue to ask you to “change the channel”. 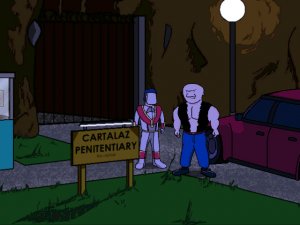 In part of being slightly difficult, there is a constant use of trial and error which can test your patience to the max. One such occurrence begins at the prison gate’s entrance. Initially starting the level with a complex yet simple puzzle is engaging yet frustrating. The best course of action is to walk away for a couple hours and come back with a fresh mind.

Visual/Audio
The graphical content is nothing to brag about. Art assets are two dimensional and provide a classical experience. While not being new aged or well defined, the visuals work well enough for an indie game. One scene that sticks in my mind in particular is the underground wrestling scene. The Defender is pitted against his half-naked boss from the Wrestle Zone in order to get much needed information. Nothing like a little visual comedy. 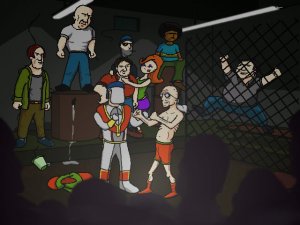 The audio direction is humorous and can be see through several of its characters. Ice Cold is perhaps my favorite non playable character to see throughout the game. He has the mindset of a child and lower IQ than his son. At the moment he had a fire started in his own kitchen, Ice Cold stopped, dropped, and rolled leaving The Defender to save his home. As the dimwit’s son walked in and asked his father why he was rolling around, Ice Cold offered the wrestling ticket – dropped from the runaway van – in turn for The Defender’s silence.

Overall
Da New Guys: Day of the Jackass is humorous as well as challenging. Complicated quests keep players interested and wanting to find out who abducted Brain – unless you have Simon’s attitude. This bullheaded mentality might even prove useful for an alternative ending.

Certain aspects draw attention away from the creativeness of the game. Difficult puzzles will have players guessing with trial and error for hours. Patience is a virtue, but I hardly ever want to use it when I’m trying to have fun. Thinking outside the box comes in handy, and I felt stumped at some of the simpler tasks. Imagine my frustration. Another drawback is the game’s cost. Even as an interesting I do not believe I would fork over $9.99 for the virtual download. I am sure there was a lot of work put into this game, but I would rather purchase it as an iPhone app for 99 cents.

All in all completing the game felt like a godsend. Going back through and attaining all of the hidden awards made for a rewarding experience. For those that have played the previous version, this edition will serve great in your collection. First time buyers should try out the download-able demo and decide whether or not the game is worth the cost.