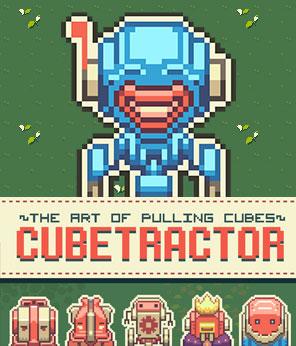 Overview
Indie titles tend to take some time to mature and essentially “grow” in the public eye. And so the tale of developer Ludochip’s Cubetractor unfolds… Conceived on a napkin in Singapore around December 2011, Cubetractor saw its early formations with collaboration between two members: Bruce Chia and Tan Jianyang Justin. By November 2012 the title was set to embark on a journey that revealed Cubetractor’s destiny. 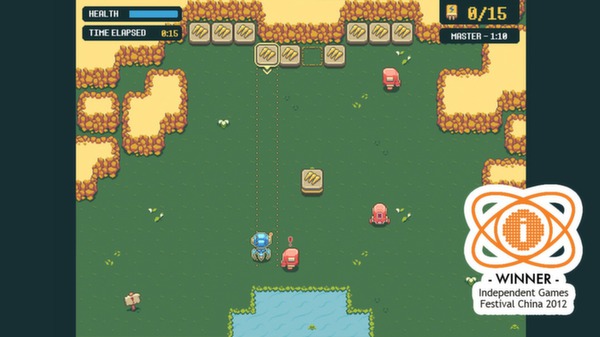 The Independent Games Festival China 2012 in Shanghai proved to be the ultimate test for the duo as their indie title had proceeded to beat down the competition and take home the gold with the ‘Best Game Award’. Beyond the festival – what more could Ludochip ask for? Even though games can reach high acclaim at events, publicity is a key factor in achieving any kind of success. Late May 2013, Cubetractor received enough votes to be inducted onto Steam. The title has finally reached my fingertips but was it a joyous encounter?

Story
Not meant to be driven by a story, Cubetractor has compelling motives that make the lead character, Endroi – our blue cube pulling robot, cute and lovable. Some robots are destined for a life of routine, monotonous work. However, Endroi knew that he had a greater purpose and that purpose led him to liberating the world of ‘red’ structures. Right from the start, our robot – or “we” for that matter – has the mentality of a pre-school child and believes anything and everything is a game. [How I believe Endroi thinks: “I pulled a cube and killed a robot… Waesomes!”]

Emerging from a scrapyard, Endroi is first met with resistance as compounds become destroyed by his cube pulling techniques. However, as the player progresses Endroi’s creator (Wultch) becomes intrigued by his potential – not that he could have stopped him anyway – and follows along the path of destruction. Others soon begin to take notice of the blue robot’s advanced abilities and begin to test him further eventually trying to kill him. What can you do when you cannot stop a robot with a mission. Celebrate in its splendor! 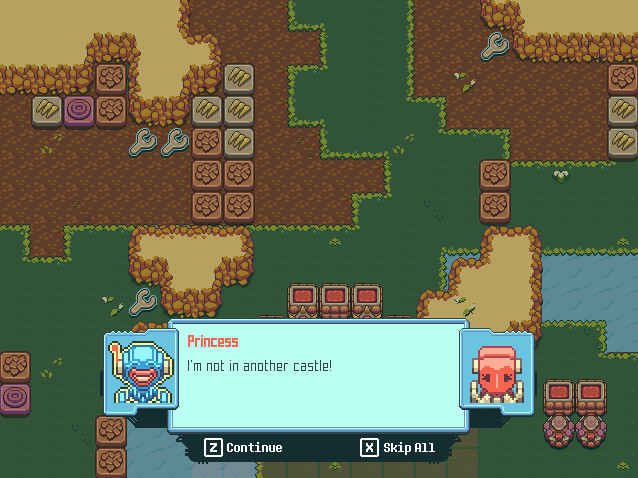 A cute addition worth mentioning about the story’s dialogue is that there are a few video games references that drives home the retro mentality. A princess of the ‘red’ variety asks to be saved, but Endroi is quick witted and replies that she is not locked away in another castle. As some players are insistent to skip text-based dialogues, I found myself intently reading to catch a quick laugh. Note that the text are distributed in short sequences, so the actual pre-level dialogue is fairly brief but comical.

Gameplay
Let’s first state that this is a game for people who enjoy developing problem solving skills. I started each level with the idea of scoping out the environment and seeing what the best way was to take out enemy turrets. There is no ‘rushing the turret’ as you cannot directly do physical damage to an object. The foundation is based on the pulling of cubes and either creating objects with them or simply destroying other objects through collision. Therefore, the controls are simple since you are left with arrow keys to move and “Z” to pull objects from the direction Endroi is facing. If you care to remove a created object of your own arsenal, hit “X” as it will break down the object. 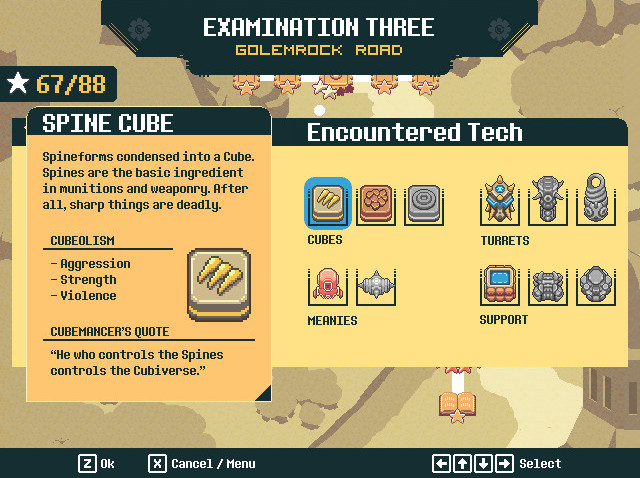 Let’s spend a moment talking purely on cubes. Cubes are spawned on object specific blocks and respawn a few short seconds after being destroyed. It is important to note that structures cannot be formed on these tiles and will be automatically broken down. If cubes are combined into a single structure, the cube will not respawn in its holding position until the structure is demolished. With that said there are three different types of cubes: spine, earth, magne. Each one holds a different purpose as well as characteristic when combining with other cube types. For instance, the spine cube is known as the ‘munitions’ cube and when combined with itself or others will result in a munitions based characteristic. Two spine cubes will create the first turret called a cannon. A spine cube and earth cube will create a power plant that enhances the fire rate of proximity turrets. The last combination for the spine cube requires a magne cube and creates a boltgun turret that shoots rapidly at close range enemy objects. Learning each combination and how they affect the ‘meanies’ or enemy turrets is all about the title’s problem solving process.

Enemy units reflect the same structures Endroi can create with the inclusion of ‘meanies’. Meanies are basically roaming robots that can do damage to Endroi upon collision. However, once meanies collide with Endroi they are then disposed of. Otherwise enemy structures are pre-generated for the map requiring you to determine the premium placement and timing of creating your own structures. 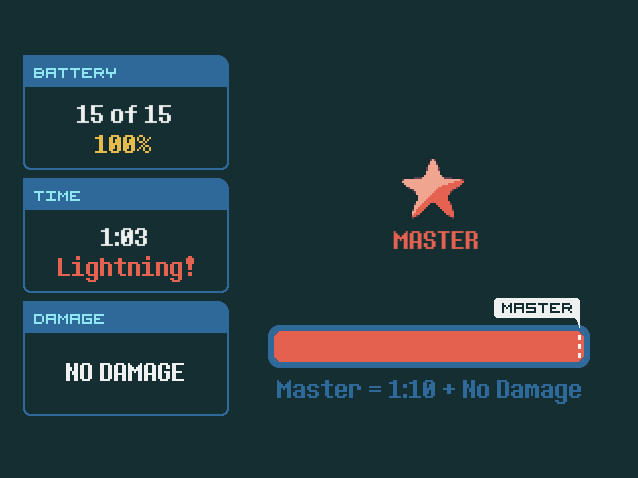 Completion of a level occurs by either collecting all batteries left over by structures/meanies (quests) or by entering a beacon after slaying structures/meanies (examinations). The main difference is that you are required to collect batteries on quests and not on examinations. Examinations grade you on completeness as well as speed, so collecting all batteries is in your best interest. Quests only require you to complete the task of destroying enemy units rather than being graded. In addition to completing a level, you collect a certain number of stars for both quest and examination. A completed quest awards you only 1 star whereas completing an examination with a master grade will present you with 4 stars. Keep in mind that quests are not required to advance to the next examination but will continually test your skills.

Visuals
16-bit visuals wrap the gameplay and story into one complete ‘cube’ package. See what I did there? Object and environment meshes blend well and retain a simple nature that only amplifies the delivery of the title. Animations when objects collide provide just enough for the player to get the idea of a combination or combustion that doesn’t over complicate the base mechanics. 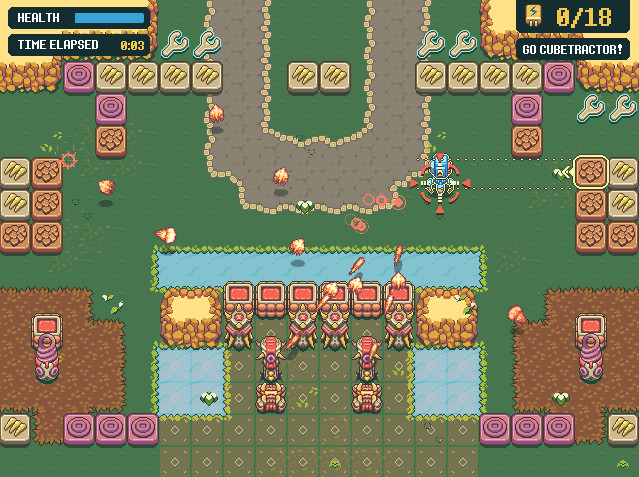 Upon reaching the latter levels, the intensity builds up as more turrets are established with power grids to give them extra fire power. Running pass the certain turrets or sitting out in the open can result in an immediate bombardment of missiles to your screen. Dodging a few shots here an there is a synch, but 10+ shots might be pushing it to the extreme. At any rate, seeing the difficulty is very important, and Cubetractor does well to execute this process.

Audio
Background music and sound effects are both excellent and crisp. Starting with the background music, I have had the pleasure of playing Gaijan Games’ BIT.TRIP COMPLETE for the Wii and can attribute that a similar method of music creation was performed – using simple sounds in a conjunctive manner. The music sends out vibes as though it is retro at heart but offers a techno renditions that has been tackled by our current generation music.

Sound effects like cubes collapsing brings out the nostalgia of early 90’s video games like The Legend of Zelda: A Link to the Past (Super Nintendo) and Crusader of Centy (SEGA Megadrive). The sounds nearly mimic these titles or at least provide the same essence of what makes a retro game. Ever feel that some developers just get what you want because they are gamers too?

Overall
Who would of thought that pulling cubes out of the ground would be so much fun? Cubetractor does everything right by providing a great indie strategy title that is made by and for gamers. By combining old school graphics/audio with a solid gameplay foundation, the duo of Ludochip has already established their first title as a success. Do yourself a favor and play this game right now – it’s WAESOMES!