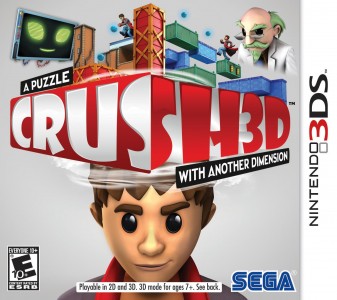 Overview
Nearly 5 years ago, Sega introduced the world to Crush on the Playstation Portable. Yeah, I am sure many of you have never even heard of Crush, as even though the title was critically praised, it still failed to garner much attention and quickly garnered a “hidden gem” status. Thankfully, Sega like to deliver fan service on a daily basis and decided to give the IP another try in a whole new dimension with Crush 3D. As you would guess, this is the same game that we seen back in 2007, but completely re-tooled and repainted to fit within a 3D perspective. It’s a brilliant concept for revival, but is Crush worthy of another try? Here is my review for Crush 3D. 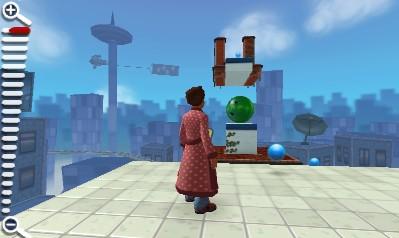 Story
If you played Zoë Mode’s Crush years ago, you should recognize the story almost instantly as it’s nearly the same tale. Players take the role of a troubled young lad by the name of Danny, who is trapped in his own sub-conscious due to a friendly scientist. Why, you ask? Dr. Reuben (the scientist, of course) created a device known as C.R.U.S.H. and is using the machine to put Danny through the ringer in his own head, where Danny must overcome obstacles while being treated like a lab rat.

Yes, as I mentioned, it’s pretty much the same kind of plot, but this time the entire atmosphere and even the main protagonist have a much lighter tone, which makes the entire experience feel much more…well, Nintendo. While this new coat of paint feels more approachable this time around, a good bit of the dialogue is used on quick one-liners and it becomes clear very quickly that this plot is mainly used as glue to hold the player’s attention, rather than to give Danny any character development. It’s a bit of give and take and a minor step down from the much darker PSP version, but I found myself rather attached to this little cast as I played and even though the jokes fall flat a good portion of the time, one certainly has to respect the many charms Crush 3D has to offer as a complete package. 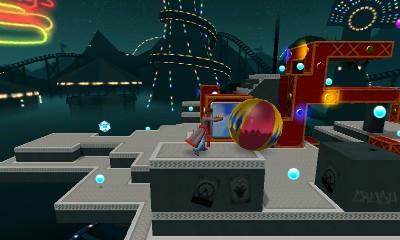 Gameplay
Starting up Crush 3D, you would honestly think you are playing a 3D platformer that was ripped straight off the Nintendo 64. Platforms are floating in mid-air, the player can move in all directions, and even the design of all of the levels reek of that retro goodness that many of us grew up with. If you even think that you can play this title as a platformer though, you will quickly get stuck fast though as Crush 3D is a gritty puzzler at heart that demands your attention and patience throughout the entire experience.

The main concept of each stage is to make it from point A to point B, but the good doc has ensured that this will not be an easy task as the player must utilize their C.R.U.S.H. device to get through. Hitting L on the 3DS instantly squashes the world into a 2D environment, where platforms grow closer together and obstacles merge. This allows for walls to become steps, pathways to open up, and exits to become fully visible. Un-crushing has the opposite effect and sends the world back into it’s 3D state, where the player can then switch their camera angle to get what feels like a brand new level to explore as the crushing can be done again in order to reach different areas of the stage. Danny can jump, crouch, and perform all the basics quite well in this view, which is a necessity if you want to get all of the marbles, trophies, and other collectibles that can be found in each area. 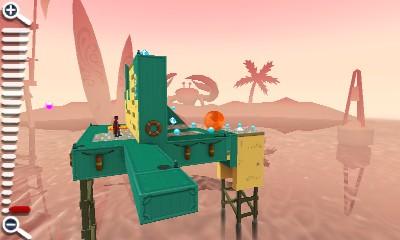 Yes, it’s a bit confusing at first as all of this takes some time to get used to, but once everything clicks with the player, the genius behind these mechanics start to shine through. Think of yourself looking inside a cube with a few disconnected platforms or what what is essentially an unfinished level of a classic video game. The more you rotate this cube, the more these “pieces” of a world start to fit together. The crushing element is pretty much your way of connecting the dots and finding a path to a destination, with Danny playing the part of the avatar you must control as you press on. As the levels progress, so does the difficulty as enemies, moving platforms, and switches show up to add in more of a challenge to what is already a brain-drain. I did appreciate seeing new obstacles and yes, they do help keep everything fresh, but later on one will notice that the game starts to ramble off course with these additions, becoming more of a trial and error-filled test of patience than the charming puzzler seen earlier on. 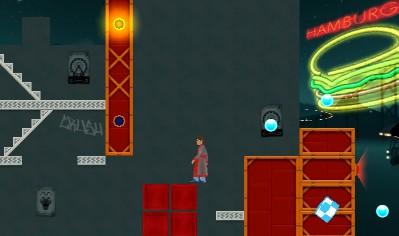 With that said though, there is still something oh-so satisfying about progression within Crush 3D. I would spend what felt like hours in a good number of stages, just rotating my camera and moving around each area, trying to scope out the environment for clues of what to do next. No matter how daunting a stage may seem though, each has an answer and effectively completing a world is sure to make even the most hardcore puzzle nut let out a cry of glee when they find all of their marbles and snag up that coveted trophy. Even though you should be advised of the unforgiving nature of the latter group of stages, you still should not be turned away by these warnings of difficulty, as much like Kirby, nothing is truly mandatory other than making it to the end, and that alone makes this a worthwhile puzzler for completionists and casual players alike.

Visuals/Audio
For a game that is essentially an upgraded and slightly rebooted port of a PSP title, Crush 3D gets the job done graphics-wise without problem. Danny’s robed look does a lot to lighten up the once serious mood of the narrative, and he also has no problem fitting into this insane world coming from his own brain. Even though the visuals are crisp for the most part though, a part of me craved a bit more when it came to the actual environments. There is a good chance each person who tries Crush will spend a good percentage of their time eye-balling every platform and minor detail within each stage, but detail is something that seemed to be overlooked, as most levels just seem a bit bland and never provide enough appeal and charm to be engrossing. The 3D is very noticeable though, and almost eliminates any of those complaints as the depth of the effect feels almost required at times just to get a full scope of each area. 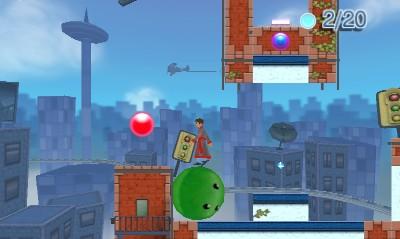 The soundtrack present is made up of pleasant beats that bode well with the gameplay and even though the tunes are rather forgettable, they do add a nice coat of chipperness to the atmosphere, which is a good thing considering the work your own cerebellum will be performing. Other than the music, there isn’t a lot of audio to truly speak of. Minor sound effects do their job well but never stand out and voicework is unfortunately completely missing to give this enjoyable tale the justice it deserves. At the end of the day though, none of that really matters as this is still a puzzle game and was never intended to put on an elaborate show for the player – but I still would have loved to have seen some more personality in the small bits of dialogue provided.

Overall
Even though this is an upgraded version of a 5 year old game, Crush has made a fine transition into the 3DS’ library. The 3D of the platform is utilized to near perfection and even though there a few minor flaws in terms of design, the mechanics offered still feel as fresh as they did since first being introduced on Sony’s handheld and are sure to please anyone looking for a highly intricate puzzler for their on-the-go gaming. Is Crush 3D any more revolutionary than the first outing for Danny? Not entirely. It is however still a solid title that is sure to have you looking at objects in every dimension.