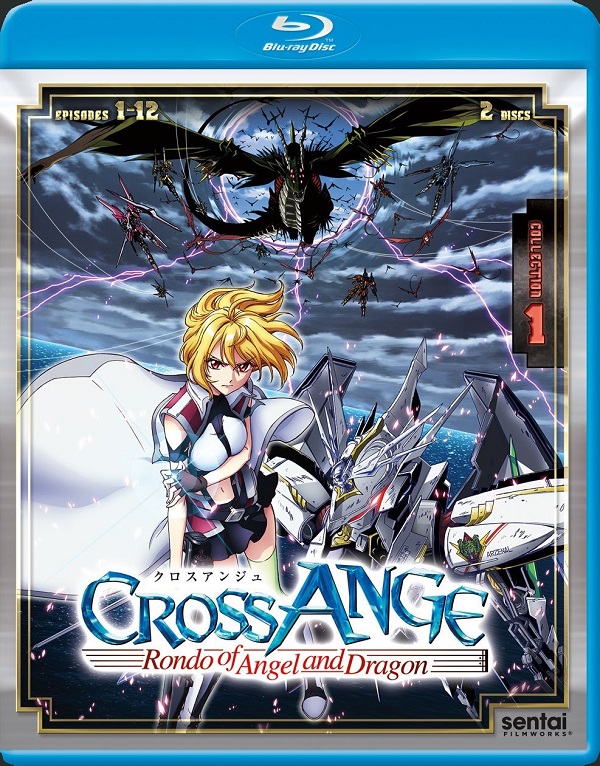 Stories of redemption and revenge are often seen as incredibly popular in various forms of media. The lead character or group is wronged in some way or flat out killed and then viewers watch as the affected party does their best to either restore themselves to their former glory or seek vengeance. Generally, those who are struck down initially are instantly sympathetic to viewers due to what has happened to them, but what happens when a story begins where the main character is far from average and is actually quite despicable. Well you have a show like Cross Ange: Rondo of Angel and Dragon to demonstrate and it does so in a rather sudden and fairly unexplained fashion. So now that the first collection has been released in English, is the series worth picking up?

The world of Cross Ange is almost entirely at peace thanks to advanced technology/magical ability called the Light of Mana. Thanks to this advancement war has come to an end, poverty, and even hunger have almost entirely been eliminated. Unfortunately there are some issues that still remain and these are primarily due to women who have been born without the ability to use Mana, called “Norma.” When these Norma are discovered they are often imprisoned or flat out killed, and the worst offender is Princess Angelise as she declares that she will find the source for the Norma and eliminate them for good to create a more beautiful world. 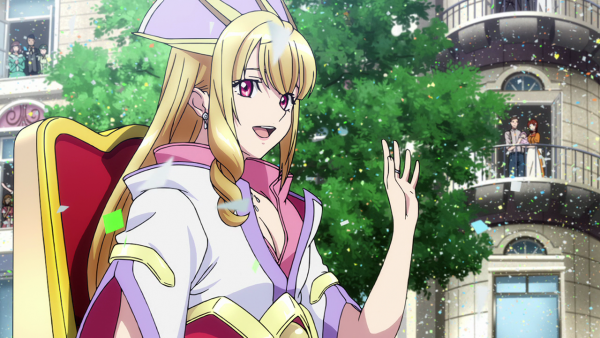 Unfortunately for Angelise, during her coming of age baptism ceremony her brother Juilio reveals the truth that has been hidden by the royal family. That Angelise is one of the Norma that she so despises. Due to the fact that Norma are seen as monsters by average society, the people instantly see Angelise as a creature of disgust and the former King and Queen as traitors. While attempting to flee, Angelise’s father is imprisoned and her mother is killed all while her brother Julio assumes control of the country with Angelise being sent off to an all-female prison and forcibly enrolled in the military.

After arriving at the prison island, Angelise is forcibly stripped of anything that would consider her a noble, even her name as she is now called Ange instead, and later informed that the peace that normal humanity thrives on is a falsehood. Powerful dragon-like creatures that have been given the name DRAGONs are a constant threat to the world and thanks to the Norma’s lack of Mana and ability to break through anything related to it, they are used as human weapons in order to fight and die to protect the populace, all while the populace lives in complete ignorance of the threat. 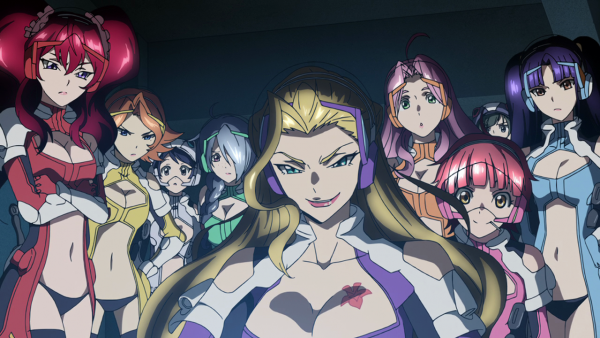 This is the type of series that will likely scare your average viewer away thanks to the way that Ange is treated once she is taken prisoner. She is violated and dehumanized to the point that her constant denial about her existence as a Norma and the way she treats people around her as subhuman leads to everyone treating her terribly. Compound this with the very first battle resulting in a number of deaths and Ange wishing to simply die and you have a character that is completely broken to the point that many may be a bit uncomfortable. That being said, those who manage to stick through the rough opening episodes of Cross Ange will find that they are in for a fairly interesting series so far. After her initial thoughts of suicide we see Ange continue to grow over the course of the first twelve episodes of the series and become her own character. With her previous attitude torn to shreds and then slowly developed over the course of battles and interactions with other pilots and even a certain man named Tusk, watching Ange transition from being a naïve princess to a determined woman on her own path of survival and willing to actually work with others is one of the biggest highlights of this series so far. 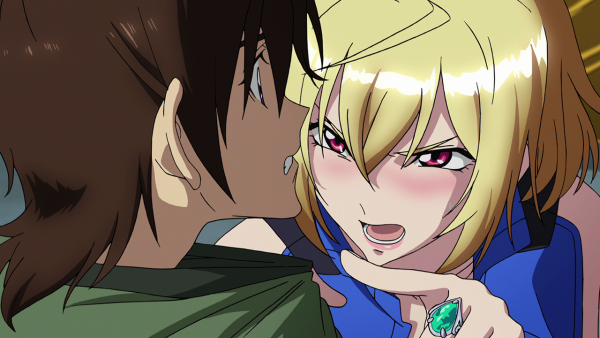 The other is a mix of the dramatic interactions between Ange and the rest of the characters in the same unit as her and the way that the storyline continues to throw various twists the viewer’s way. It is quite clear from the get-go that there is far more to the world of Cross Ange than what is initially shown, especially since the early reveal about the existence of DRAGONs but over the course of the first twelve episodes, and especially during the final few episodes in Collection 1, numerous twists and developments are revealed about the world.

These revelations raise numerous questions that we can only hope will be answered going forward into Collection 2 and help revitalize the story going into a second half while also leaving viewers off with a cliffhanger with some quite obvious implications. That being said, there are some issues with the series so far and this primarily comes in the form that a large number of the side characters are given very little focus other than either being bullies or supporters of Ange with the other being the fact that, while fan service does have its place, that the series over exposes the lesbian relationships of a few side characters far more often than it should.

It is interesting to note that despite the fact that there are some rather shocking scenes present in the first few episodes that the actual amount of gore and nudity it these series is kept at a rather low level during this first half.  Any time that a girl does end up completely naked, they are generally conveniently hidden by water, steam, or kept just out of the camera angle so there is no real nudity in the series, though plenty of it is implied. That being said, thanks to the designs of the girls’ outfits and their positioning while piloting the weaponry, the camera angles do tend to favor views that include a character’s breasts or butt. 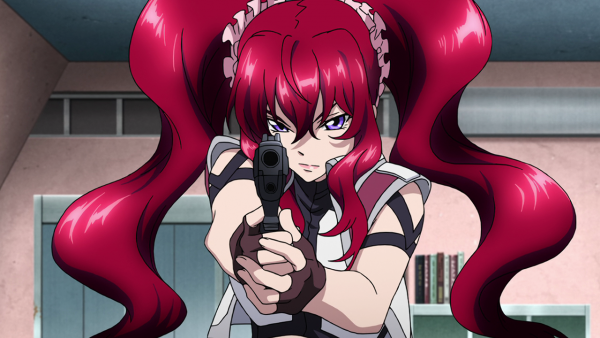 Outside of the fan service aspect, the designs of the mech suits piloted by the Norma, which can change between flight mode and assault mode, are fairly standard form for a mecha series. In fact even the weaponry used by the mechs are about as standard as they come. Thankfully the fact that the cast battles against dragon-looking creatures helps keep things a bit more interesting than standard, but don’t expect to be blown away by the battle scenes.

With Sentai Filmworks’ release of Cross Ange: Rondo of Angel and Dragon Collection 1 the company has chosen to provide the series with an English dub to go along with the standard Japanese voice track. The English voice cast does a great job here with the source material and Emily Neves’ handling of Ange’s character progression is portrayed well, though those who may be a bit squeamish might prefer the Japanese voice track for the first few episodes. 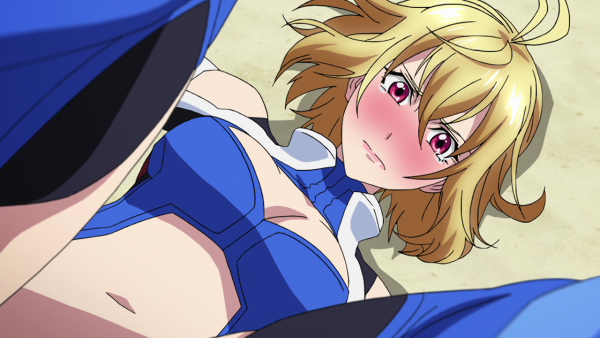 The soundtrack for this series is actually made up of quite a few songs that really stand out thanks to their placement in action sequences. These orchestral tracks help add some tension to the otherwise fairly standard battles that are portrayed in the series and it is worth noting that all of Ange’s singing is still kept in Japanese. As for the opening and ending theme, we have “Forbidden Resistance” by Nana Mizuki as the opening while “Cold Beauty” by Nana Mizuki serves as a fitting closer that often begins playing over the last few seconds of an episode to great effect.

With the release of Collection 1 Sentai Filmworks has included a handful of special features with the release. The first of these happens to be a half hour “Special Interview by Momoka”  done by the Japanese voice actress for Momoka as she talks with three of the creators of the series about various aspects of Cross Ange and its creation. The rest of the bonus features are fairly standard as they include the original Japanese commercials, clean versions of the opening and ending theme, and finally trailers for other Sentai Filmworks releases.

Cross Ange is a series that many may have heard about back when it aired thanks to some very controversial events that took place in the first episode and while the world established by the storyline and Angeline’s location at the time do establish reasons for why such things took place, the various events that occur over the course of the first few episodes do serve as a way to tear down everything that Angeline once believed and allow her to develop into Ange.

This leads to an interesting story of a woman learning to survive in a world completely different from her own and a storyline that is filled with little twists and turns and big revelations to keep viewers interested in the world. That being said, there is a heavy reliance on shock value here and the fact that one of the biggest revelations so far ends up leaving viewers with a cliffhanger is disappointing but it will be up to the second half of the series to go more in-depth regarding these reveals.
Capsule Computers review guidelines can be found here.