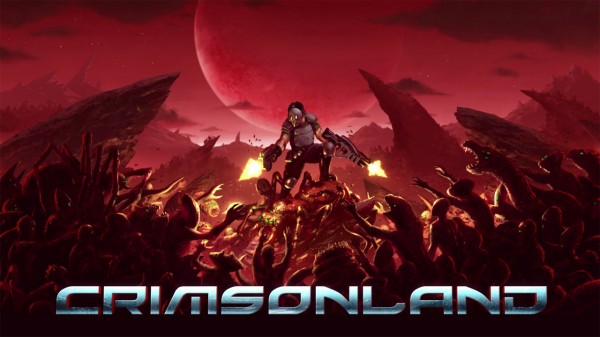 Crimsonland is a HD remaster of the original that began life as a student project, and kicked indie developers 10tons Ltd into gear back in 2003. After more than a decade, Crimsonland is resurrected on Steam, but also makes its début on the PlayStation 4, both with updated graphics, new assets, design tweaks and added content. It’s also a cross-buy title on PlayStation platforms, with the PS Vita version hitting PSN soon. The title has been a cult-favourite of sorts among top-down shooter enthusiasts since its original release, but will this remake leave just as big an impression on a new generation? 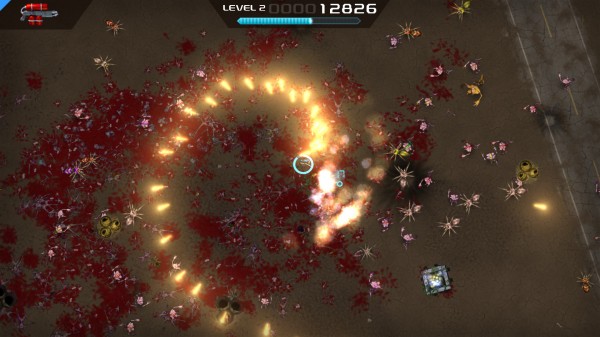 Crimsonland features two main game modes – Quest and Survival. Quest plays out across six chapters, holding ten levels each. There isn’t a story to speak of, only a series of challenges that ramp up exponentially in difficulty within the three established Difficulty settings to choose from. There is no ‘Easy’ in Crimsonland, only ‘Normal’ , ‘Hardcore’ and ‘Grim’. At first, only the former is available to select, with the latter dificulties only becoming available once you’ve completed Quest mode on the easier choice. This is representative of Crimsonland‘s unlock system on a whole; every milestone achieved grants a new plaything. Completing a chapter unlocks a new Survival mode play type, and completing a single level results in the alternating unlocking of weapons and perks. All up, there are thirty “unique weapons” to cause utter destruction with, although they’re really anything but. Multiple are variations or combinations on a base weapon earned early on, e.g. the Plasma Shotgun – a mix between the trusty Shotgun and Plasma Cannon. 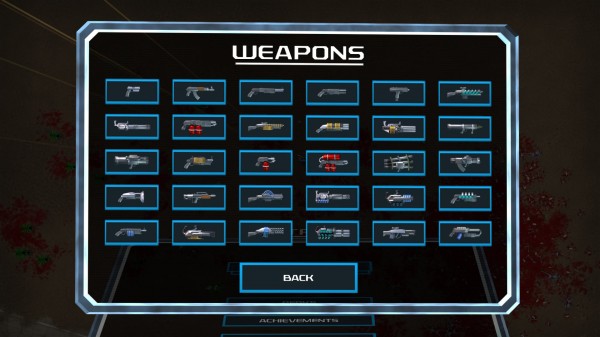 Each gun has its own trait value, from clip size and reload speed to damage covered, that affects their efficiency and effectiveness in certain situations. For instance, the Flamethrower should be the weapon of choice for those pesky, quick lizards and spiders, at least early on. Different guns are dropped by decimated enemies, as are perks. The Perks are true game-changers; speed boosts, shields, incendiary ammo, nuclear explosions and freeze blasts are just a few that give great advantages to the player, enabling them to retreat from dense spots on the map, clear the immediate area for some breathing room and gain a momentary reprieve from the onslaught. Enemies vary between slower aliens, mutated lizards, giant arachnids (some that shoot fire from their mouths!) and more. Hives and spawn points are introduced not too far into Quest mode that must be destroyed, or else the foes won’t stop coming. Control-wise, Crimsonland sticks to the basics, utilising the twin thumbsticks for movement and aim, and R2 to shoot. A reload button is alluded to, but was not specified in the control scheme diagram within…I just kept shooting till I ran through the clip, forcing an automatic reload. 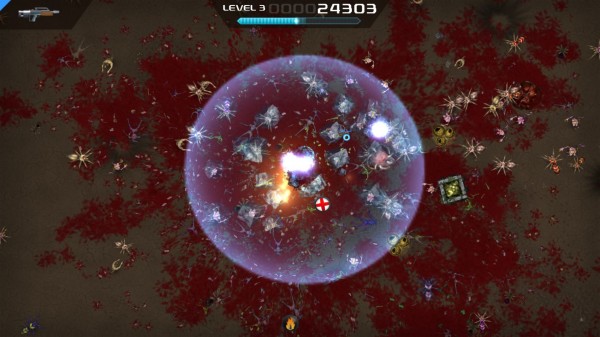 The trackpad is an alternate option for aiming and shooting on the PS4, but it is extremely unintuitive; its responsiveness might be higher, but accuracy is harder to attain. Up to three friends can jump into the game by simply pressing play. The ability for a pal to join the fray on a particularly tough mission helps tremendously as things can get pretty dicey, fast! I didn’t experience Grim difficulty, but I can imagine how frustrating it must be based on how tough things get on the lower Difficulty settings. And the lifeline that is cooperative play isn’t restricted to Quest mode either, with the same easy drop-in capabilities found in Survival mode too. Survival boasts five play types: classic Survival, Rush, Blitz, Weapon Picker, and Nukefism. In the first, your score rises with each kill, doubling as XP points as you’ll eventually hit an XP threshold, leading you into the next level. Then, you can choose between a careful selection of four perks. In Rush, well…you’re stranded with just a machine gun, with infinite ammo mind you. But good luck with that. Blitz speeds up classic Survival play by 2x. Weapon Picker spawns timed gun pick-ups around the arena, each with only one clip worth of ammo. And finally, Nukefism takes away all weaponry…perks only. Yep, survive solely by using perks. There’s clearly some good variety here, and getting to the top of the respective leaderboards increases replay-ability even further.

Crimsonland‘s colour palette remains muted and limited, with the key art displaying more vivid colour than anything you’ll see in the game. Atmospherically, it is apt, but the drab greys and browns become a bore to stare at mission after mission. Not only that, but the environments are so non-descript and plain (literally, they’re just plains!) that they just compound that feeling that you’re playing an aged title, despite the revamp. You’ll almost have to remind yourself that you’re playing Crimsonland on a Ps4, which promotes a sense of anachronism in and of itself. Then again, that’s not to say that the reworked assets go completely unappreciated, as the character models themselves are noticeably more three-dimensional and detailed. In terms of soundtrack, there are few tracks in the game, with the repetition of the generic, grungy, 90’s-esque metal wearing on you after a while. The sound effects themselves can also be grating, especially after you are continuously bombarded with the same shooting cues, some of which sound as if they were recorded on old technology like the first couple Doom entries. Also, at the beginning of each level, the audio is delayed until sometimes the first kill; you could be spraying bullets for three seconds with no aural accompaniment. 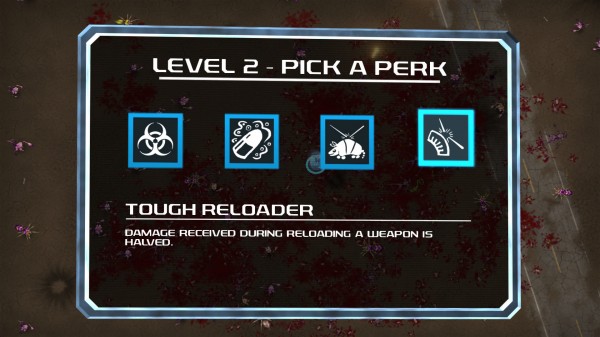 Crimsonland is to be enjoyed for its unabashed simplicity – sometimes, you just want to shoot things! (that sounded really distressing now that I read it back…) At the same time, that perceived lack of depth will certainly make it easier for many to put the game down after an hour or two. Four player local co-op is a great enhancement, allowing more friends to join in and multiply the fun (to my knowledge, the original only had 2 player local co-op). It becomes quite challenging as you progress in Quest mode, and high score hunters will surely tackle Survival mode in order to top the leaderboards. All that said, and considering its next-gen makeover, the game – its levels in particular – looks bland, and coupled with equally outdated audio and U.I. elements, Crimsonland still feels old. But if you’ve never played the original, like me, Crimsonland is still worth checking out for those times when you get a sudden craving to test your spider-killing skills against the world.