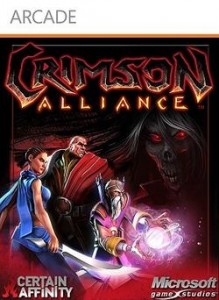 Crimson Alliance has a tough act to follow. As a top down action-RPG it falls roughly into the same genre as the incredibly well received Bastion, released only a few months ago. Developed by multiplayer specialists Certain Affinity (who worked-for-hire on Halo 2 and Left 4 Dead), Crimson Alliance is their second full game for XBLA, following up pirate strategy game Age of Booty.
Players can choose from one of three classes to play through a series of dungeon crawling levels, with missions available in single player and both online and local multiplayer. The classes are the standard RPG triumvirate of wizard, warrior and rogue, although here the warrior is a mercenary and the rogue an assassin. After some brief customisation options that will leave RPG fans a little concerned (name and clothing colour only), the story kicks into gear.

There is a plot to Crimson Alliance, just. It has something to do with an evil half naked sorceress destroying a city and summoning the undead. The wizard thinks he has something to do with it but handily has amnesia. Thanks to the opening sequence players will know exactly what happened and sadly they won’t care. The plot is barely connected to the actual gameplay at all and screams of being an afterthought – it’s not good that after playing the game right through and repeating several levels and playing some co-op, I still couldn’t tell you the name of the city the plot centres around. There’s no sense of story progression and winning the few boss fights has absolutely zero impact when you have no idea what it is your supposed to be doing other than killing things.

It’s not that a huge story is expected from an XBLA title, it’s just that what there is lacks the detail to make you think about what you’re doing, instead of button mashing to achieve a goal, you’re just button mashing. The unlockable challenges in particular are completely void of any detail, with not even the briefest of text boxes to explain what they are. Enemies appear, you kill them.

The gameplay is solid and entertaining, so it’s a real shame that Crimson Alliance has nothing to back it up on the story front. 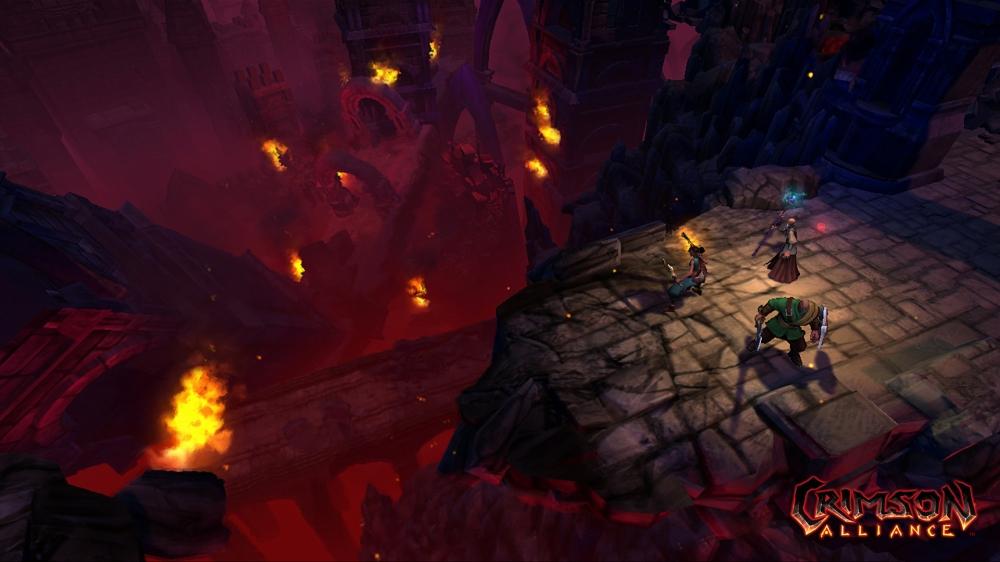 The combat is easily the game’s strongest point. The controls are simple, with the face buttons providing ranged and melee attacks and dashes. The exact moveset depends on your class, and of course you can block too. The wizard freezes enemies whilst the assassin can stun them, and each class has a special ‘ultimate power’, which can only be unleashed by killing enough enemies to fill up an energy bar.

There are plenty of explosive barrels around, as well as one use items like throwing axes and deployable turrets. Some levels have booby traps, with giant saws slicing through anyone who gets in their way and flamethrowers that can trap both player and enemy. In later levels these all become essential, and timing their use can make or break bigger battles.

Crimson Alliance does take a couple of levels to get into its stride, but when it does the gameplay becomes a lot more interesting. Enemies get a little tougher and take more than stabbing to kill. There are ranged archers and shamen, shielded enemies and some oddly speedy zombies to name a few. Big battles throw multiple enemy types at you, and in single player especially a bit of strategic picking off of the biggest threats is required -this isn’t a game where you can just spam the attack button. Things do become repetitive though, and when you’ve figured out how to deal with new creatures large multi wave battles become a case of rinse and repeat button mashing. The traps, pick ups, and ultimate powers help to break this up, but the game would definitely benefit from having more variation in the missions.

There are secret areas that hide gold, new weapons and pick ups, but are often no more secret than walking left instead of right. Some are hidden by class specific doors, but given that they hide class specific treasures there’s not much to lose out on other than your end of level medal. These are awarded on the basis of secret areas found, time taken for completion, and the combat multiplier. The multiplier builds as you take down enemies, but drops a full rank if you take a hit. This is fair enough, but the weighting in the final scores is so heavily influenced by it that taking even a modest amount of damage can mess up your medal chances. 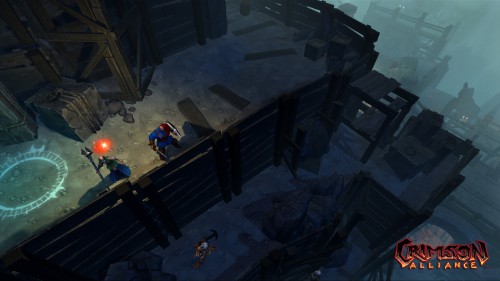 The gold you find can be used to purchase new weapons and armour from the merchants that unlock along the way. Unfortunately the best kit is often overpriced to the point that you have to replay old levels several times over to be able to afford them, and every shop comes complete with a chest encouraging you to hand over real world cash in return for some gold.

Equipping new kit is the only way to affect your character stats – there is no levelling up. However I found it to be a streamlined way to customise to my own style of play. My assassin was forever throwing daggers, so I chose a combination that favoured the dagger throw over the main blade. The simplicity may not be to everyone’s taste, and the ‘RPG’ tag that Crimson Alliance has been given is a bit of a stretch. The weapons and armour do look different when you equip them, and I was disappointed to find a replacement throwing dagger after spamming enemies with dozens of giant butcher’s knives! One thing that annoyed me however, is the inability to sell any of your old items, and I can’t see any reason for it.

Multiplayer is much the same as playing on your own, but comes with the added bonus of being able to chuck explosive barrels at each other (we spent more time doing this than actually killing monsters). Some secret areas are only accessible with two or more players, and the combat is generally easier. I genuinely would have loved to see a barrel throwing versus game as one of the challenges, and think the developers have missed a trick in keeping everything as a simple ‘kill the bad guys’ mission. 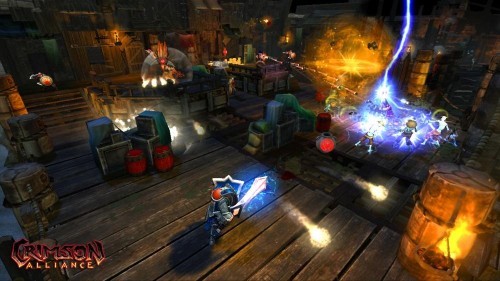 Cutscenes are pans and zooms across comic book style illustrations, for the most part the same drawings of the characters over and over again. The wizard provides what little exposition there is and the other two just happen to be standing within earshot – their responses are bland and ultimately pointless, with some horrible voice acting not helping the case. The assassin in particular sounds about as likely to kill someone as Paris Hilton. The music is unremarkable and the creature sounds can be a little bit grinding, but overall there’s just not much of an impact in the sound department either way.

The in game world is thankfully a different story. The style has a strong fantasy feel to it, and the dungeons are richly coloured and have a lot of extra background detail. Enemies don’t just randomly spawn when you’re done with the first wave, a nice touch that sees skeletons scrambling up through hatches and zombies rising from their graves. They are integrated into the level surroundings too, seated at tables, sleeping around campfires and toiling away in mines. It feels like there is a proper world here, so it’s a shame that there’s no story to flesh it out.

Crimson Alliance is a good game, but most of its strength lies in one place, and that’s the combat. If broken up into smaller chunks the repetitive element isn’t such a problem, but the lack of any decent connection to the game world makes it largely forgettable, and it’s definitely not an RPG. It’s a strong enough action adventure which I did enjoy playing, but it lacks a unique selling point or a strong sense of character to help it stand out from the crowd.