Chances are if you’ve got an email address, then you have experienced spam at one time or other. Some email services manage to filter it out and either mark it as spam or send it the junk inbox, but would you be happy to do this if you knew spam was actually a cute little guy on a mission to visit everyone’s computers whilst being on the run from the Internet Police. This is the situation Crazy Spammer puts you in: you play as Little Spammy as he traipzes across the internet on his journey to deliver as many spam messages as possible without being snuffed by interferences like the Internet Police, internet security and firewalls, and spam filters. 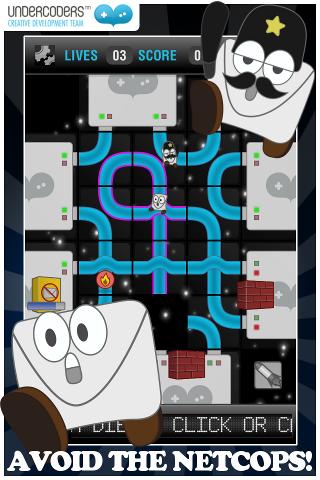 The gameplay is puzzle-orientated, although unlike a lot of puzzle games, this game can easily come under an ‘action’ heading as well, with frequent frantic encounters with different types of obstacles for you to overcome on your journey to guide Little Spammy through the pipelines of the internet. Little Spammy moves of his own accord but you must shape the world around him and organise the various routes of the internet to guide him to his destinations by sliding the tiles. This may sound simple, but when you take into account that there are the Internet Police roaming through the circuit on some tiles, and computers put up firewalls and spam filters after visits which then need to be dealt with before visiting again, it quickly becomes very tricky indeed. 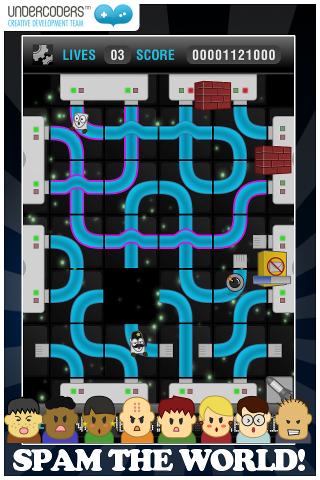 It offers an easy to learn but difficult to master style of play. When you first play it the simplicity of it makes it seem easy: it looks slow paced and relatively basic. But the introduction of just one Netcop or a firewall can take the game to a whole new level. With these hurdles in the way, you have to focus not only on organising the puzzle, but evading the Internet Police and picking up a power-up to remove the firewall blocking access to one of the docking stations. It is also difficult to master because of the sheer range of advanced techniques the simple mechanics open up. Soon you learn to move the tile Little Spammy is on, on top of the ones around him, to open up a whole new play-style.

And this is just the easy mode. You may find yourself getting in a tangle in this mode once all the games features are put into use, but the game comes in three difficulty modes, Easy, Normal and Hard, meaning anyone looking for a challenge needn’t look any further. What may at first look as shallow as a puddle turns out to be as endless as an ocean – it is completely mind-boggling at times and one small lapse in concentration usually spells disaster. 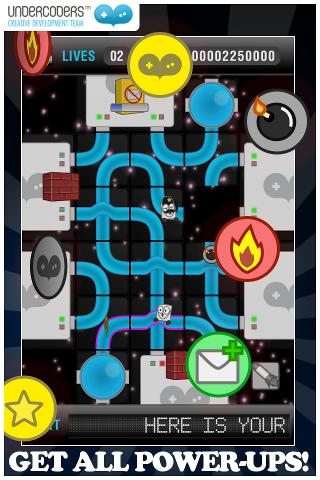 However, this isn’t to say it is inacessible. Because it is basic at heart, anyone can play it and enjoy it – the range of difficulty levels futher cement this point. The cutesy art-style brings a life to spam that almost creates a feeling of empathy, and the game has a sense of humour that will keep you on your toes and ensure that it isn’t bog-standard grinding to get a high score, as there is certainly some laughs to be had at Undercoders imagining of the Internet.

Overall, Undercoders have created a nice blend of action and puzzle, which when combined with the charming concept and presentation, produces a fast-paced and somewhat addictive game. Features such as highlighting your character’s trajectory are thoughtful inclusions which help the game to run smoothly and caters for younger players too, but a steep difficulty curve could prove too much for some. Crazy Spammer, quite literally, provides a bang for your buck. The presentation is good, it offers a range of difficulty and it is a fairly original too. The sound effects are a bit naff and aren’t really up to scratch, but considering it is only $0.99, you can hardly complain.

The verdict: A cheap thrill that’s not for everyone but definitely worth a blast at that price.