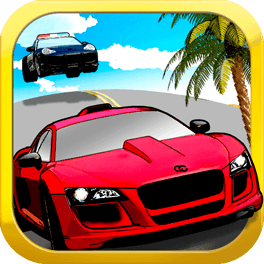 The App Store is no stranger to portable racing games. Whether it’s titles like the annual Asphalts or the iOS-ification of the latest Need for Speed, we’ve enjoyed our fair share of good racing experiences on our little iDevices, especially arcade-racing experiences. Nothing quite feels as “popcorn” a racing experience as the now-default tilt controls.

Crazy Cars – Hit the Road tries to bring back some of the nostalgic arcade goodness with an iOS re-imagining of Titus Interactive’s classic Crazy Car franchise. Is this a blast from the past, or is this a moth-ball ridden patchwork that’s serves no more practical purpose? 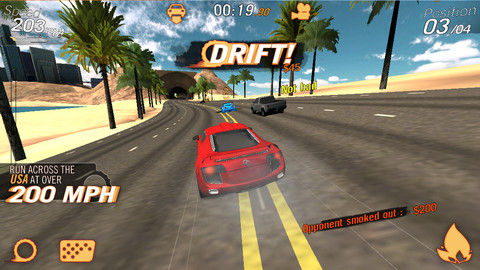 Here’s the answer: it is a moth-ball ridden patchwork that’s serves no more practical purpose.

You can tell this is a game based on replicating the experience of a franchise that dates back to 1988. Everything from the design decisions, to the way the game controls, to the technical aspects scream of a game that’s just about a decade behind everything else on the market.

The first, and most blatantly annoying gripe, is the lack of accurate sensitivity when it comes to steering with the tilt controls. In a racing game this is absolutely unforgivable. Thank God this isn’t Mario Kart and the race tracks generally have walls to keep you from falling to your death because this would be a super common problem for anyone playing the game. There is, simply put, no way to accurately turn your car around a tight corner, navigate properly onto one of the trucks that serve as jumping ramps, or steer your car with any sense of control. 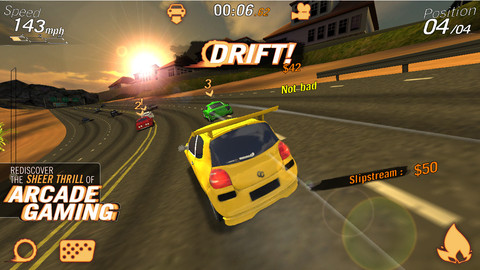 This isn’t helped by the game’s wonky crash system. There were some hilariously obvious collisions that the game chalked up to “close thing”s and there was some very unlikely stuff that ended up resetting my car – not the least of which was landing on another car during a jump. I’m fairly certain that would pancake the care beneath me, not send me spinning out as if I’d just been rear-ended.

The game features three modes. Career mode is only different from Free Run mode in that you can’t choose the map and you can earn cash to spend in the game’s Garage Mode. That mode lets you deck out your car with new rims, engine tune-ups, and the like. While the idea is a good one, I was winning races before upgrading my car and I didn’t notice that they actually made any tremendous difference. 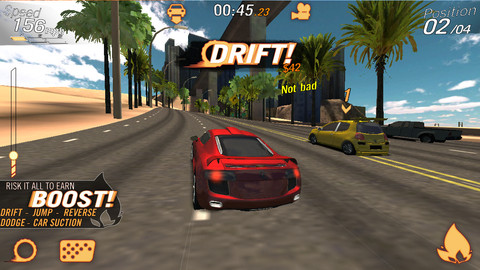 However, the idea behind these upgrades is good and you can earn in-game cash in races just by making jumps, drifts, coming close to a crash, etc. That’s a really neat feature as it bucks the arcadey “win or insert a new coin” trend and means that no matter how you perform during a race, you’ll always come out with some extra moolah. It would definitely have kept me coming back if the racing itself was not so poorly implemented.

The presentation of Crazy Cars feels like something out of a late 90’s console game.

Because of that, you could say that this iOS iteration is trying to imitate the look and sound of the old entries in the franchise. That would be a fair comment if the load times weren’t so darned long. That’s especially frustrating when the main menu screen takes five seconds to load. 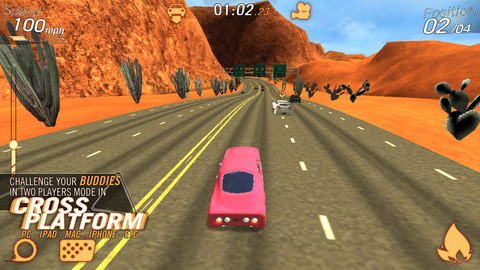 Asphalt 7 is a beautiful racing game on the exact same platform and it has equivalent load times. But that’s the thing: it’s a beautiful game. Crazy Cars – Hit the Road is not beautiful, and it does not sound up to par on any level. If the sounds don’t cut out that is.

Crazy Cars – Hit the Road could have been an excellently made adaptation of a classic arcade-racing franchise. Instead it seems like it’s just a quick cash-in that’s using the name of an older game to piggyback its way to success.

There is nothing new or original about Crazy Cars, its gameplay is spotty, and it looks worse than spotty. This would have been a good game on the GameBoy Colour ten years ago. It’s a bad one on iOS today.