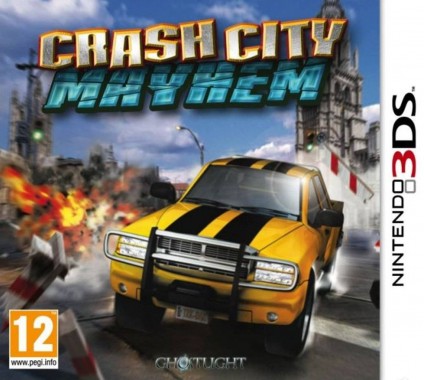 Overview:
There comes a time when games can be so shamelessly over-the-top that they become genuinely endearing. Crash City Mayhem is one of those games. It is preposterous to say the very least but there is something so deeply charming about this game that it is impossible not to get swept up in the mayhem.

Originally titled ‘Runabout 3D: Drive Impossible‘ in Japan, Crash City Mayhem is a ridiculous exploration of destruction and the gleeful fun that comes with it. If you love action movies of the 80’s and 90’s, the cheesy humour and over-the-top sensibility of Crash City Mayhem will be right up your alley. It’s crazy, it’s wild, it’s fun – it is Crash City Mayhem. 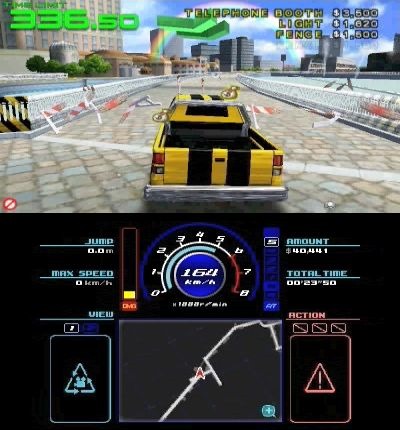 Mayhem awaits you in Crash City.

Gameplay:
The core premise of Crash City Mayhem is one that can be best described as a kind of mad genius. You crash into things and you get rewarded for doing so. There is a sense of wish fulfillment there that adds to Crash City Mayhem’s charm. Doing these insane things in the world of Crash City is pure fun. Crashing into a police vehicle and watching as it rolls into on coming traffic leaving nothing but destruction in its wake is tantalizing sight to behold. The destruction is addictive to say the very least.

Crash City Mayhem is more than a concept however, there is a great deal of layers to this game that add a sense of depth that is easy to appreciate. There are two gameplay modes; the main mode which is the standard story mode and there is also the driver’s ed mode which will help you sharpen your skills to get you ready to make some mayhem in Crash City.

The story mode is the centerpiece of the game and is actually a very deep experience with a large amount of variety on show. It has a distinctively arcade feel to it, both in terms of gameplay structure and visuals. In the story mode you play as a washed-up spy turned courier taking on one job to the next. Each episode or mission can be done on different difficulties as well as a free run which allows you to roam through the world of the episode.

There is a real challenge to some of the missions, as you need to take into account how much time you have to accomplish each task as well as keep your vehicle in good nick all the while avoiding the long arm of the law in the form of the police. Completely missions allows you to unlock more vehicles and upgrades, giving a greater level of customization to the game’s proceeding, which can be well crafted to the style of play you enjoy most. 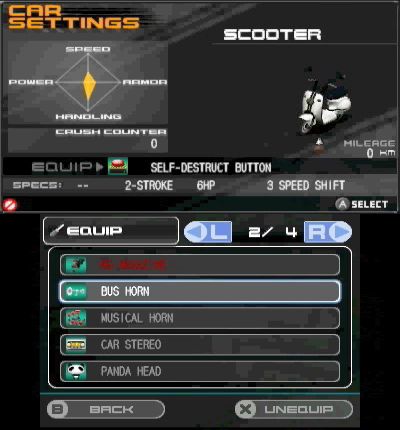 Pimp out your Scooter with a Bus Horn if you fancy.

Some mission types include chasing a vehicle and crashing into it, crashing into objects and racing to a certain goal. The variety is immense and it goes a long way to keeping the game fresh. On top of that there is a wealth of replay-ability to each episode, which players wanting to get a high score and a perfect run as well as gain more points having the option to get behind the wheel again for a mission.

If arcade style fun is to your tastes, then Crash City Mayhem will provide you with a great deal of enjoyment. There is a lot to see and do in this game and the madness at its core is intoxicating. It is a bizarre game to say the very least, but its oddity is what makes it so endearing. It is like Daytona USA meets Grand Theft Auto, you can’t help but be swept up in the mayhem of Crash City. 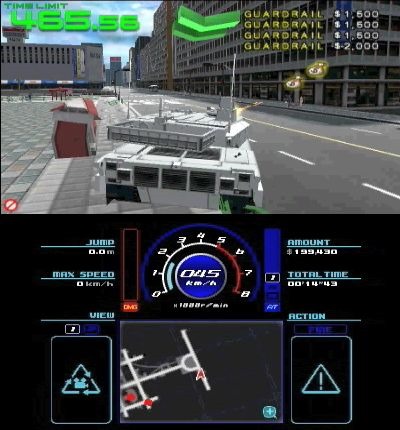 No need for petrol when you’re running on a full tank.

Visuals and Audio:
Aesthetically Crash City Mayhem is a unique blend of arcade racers such as Daytona USA and OutRun. It is very vibrant by design and features some very interesting vehicle designs. The highlight of the game’s visuals is the locations throughout Crash City that you find yourself in. There is a real Japanese style to it that feels actually quite unique for this type of game. Some of the visual effects such as smoke and fire look a little sketchy but all in all the game is a visual treat that has a distinct atmosphere and personality that is uniquely Crash City Mayhem.

Not only does Crash City Mayhem have great visuals, it also features an eclectic soundtrack that is every bit as addictive as the gameplay itself. There are a number of pulse-pounding tracks that will rock you right through your system. It hearkens back the feeling of oldschool action films which featured very similar compositions. It is dripping with atmosphere that just shouts action and excitement. Thankfully you can listen to the BGM in the settings section on the game to get a better listen to these great tunes. 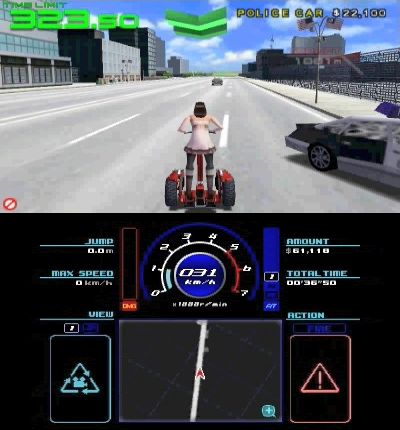 Life is a Segway, I wanna ride it all night long!

Overall:
What we have here is a very special 3DS game in Crash City Mayhem. It is a non-stop thrill ride, that goes right on over-the-top without a hint of shame. It is unadulterated fun that can be enjoyed by anyone willing to take it for a spin.

It must be said that Ghostlight have done an excellent job with localizing this title for release. If it weren’t for them a title such as this may have slipped under the radar and never seen the light of day in English, thankfully that was not the case and we can all enjoy the crazy fun of Crash City Mayhem.

This could very well be the surprise of the year for the Nintendo 3DS. Crash City Mayhem is crazy fun and quite frankly a must-play for 3DS owners. This game is absolutely insane but I wouldn’t have Crash City Mayhem any other way. Embrace the mayhem, go wild in Crash City.