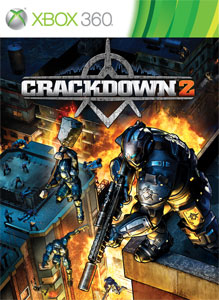 In the vertical, free-form world of Pacific City, tensions are high and escalating exponentially between the Agency and its opposing factions, the Cell and the Freaks. Returning to Pacific City as an advanced Agent, you are judge, jury and executioner as you reclaim the city and eliminate all threats, either solo or with friends on Xbox LIVE.

Building upon the groundbreaking success of its predecessor, Crackdown 2 elevates the open-world genre to unprecedented levels with the ultimate cooperative and competitive multiplayer experiences. Friends around the world will be able to sweep the streets of crime and lawlessness with the complete freedom to explore, destroy and restore justice to Pacific City—by any means necessary.”

Crackdown 2 is a sequel to the original Crackdown. You are returning to the same city, but it has been heavily damaged and buildings and streets are worse then you left them. Agents, Freaks, and Cell fight wherever you go. As an agent it is your job to reclaim the city and remove the Cell and Freak Factions from the equation.

Gameplay
A large chunk of the game consists of collecting things and doing a whole bunch of side quests. Orbs are scattered everywhere and collecting them will consume a huge chunk of your time as you explore the sandbox city. There are tons of things to do in the city that pretty much anyone can enjoy. Races, orbs, stunt rings, missions, tons of freaks to kill. There is a lot to do.

A large chunk of the game consists of leveling up your character. Based on what you do in the game, certain skills will level up. Some of the skills are cool, like raising your agility lets you jump farther and higher. The other skills give you better guns or vehicles, like driving, shooting, or explosives. Strength lets you pick up heavier things and hit harder. Saldy, melee combat is still pretty bad and not that fun. Stick with your guns and rocket launchers. BOOM!

The sandbox city lets you do pretty much anything you want to do. You don’t have to ever do what the game wants you to do. Just want to blow a whole bunch of people up? You can! Want to race friends around town? You can do that too! Want to take a helicopter and drag a chain of cars below you? You can even do that! You can do pretty much anything in Crackdown 2, and it is even more fun with a whole bunch of friends.

So many things to do, what better way to do it all then with a bunch of friends? Crackdown 2 lets you explore the entire city and do pretty much anything with up to 3 other friends. Bringing friends into the game makes everything a lot more fun. You can all do things together, or do it separate. The game keeps track of everyone’s collection status separately, so you only see the stuff you need and they only see the stuff they need. It is a nice touch and keeps Co-op a lot more inviting. Friends can jump in at any time, and the host sets permissions for who can join.

Audio & Graphics
The only noticeable audio is the Agency overlord voice. He will help you in the beginning by telling you what to do, but later in the game he just continually repeats himself, which gets kind of annoying. Explosions are pretty epic but everything else seems to be muffled and not as impressive as it could be.

For a sequel this game’s graphics look too similar to the first game, actually the graphics look like they should be from a game that came out 3 years ago. This may be for the sake of being able to put hundreds of freaks on the screen at one time, but then I would expect there to be no framrate lagg. Sadly, when things get wild and awesome, the moment is ruined by a terrible framerate that slows all the action down. The slowed framerate really ruins the fighting and shooting in the game.

Overview
Crackdown 2 is more of the same from the first game. If you loved the first game and are dying to get your hands on some more Crackdown goodness then pick up this sequel. While this game is a sequel it feels more like a revival rather than a full sequel. The Main quests are repetitive and pretty much just the same thing over and over again. Collecting everything is a lot of fun, and upgrading all your skills makes you feel powerful, but Crackdown 2 is pretty much just its Predecessor with a few additions. 4 player co-op is really nice, but the game just feels too much of the same stuff.
I give Crackdown 2