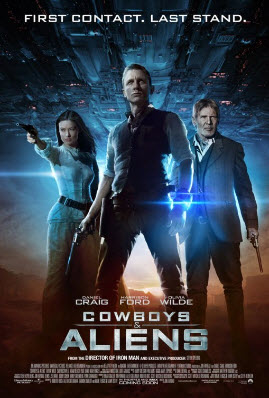 Regardless of whether you believe mixing two pop culture icons like Cowboys & Aliens is a unique genre mashup or a shallow marketing ploy, chances are the film has caught your attention. Post-viewing, it feels like both descriptions are accurate.

Westerns almost never dip into the realm of the supernatural, and to my knowledge have probably never dealt with aliens, so it is refreshing to see this spin. Likewise, alien invasion films often restrict themselves to the time periods of the present day, a projected future or amidst the UFO hysteria of the 1940s and ’50s. The two genres merge quite well, putting an interesting spin on the conventions of each. But somehow, the final product still feels like a generic action film, albeit an enjoyable one.

Directed by Jon Favreau (the Iron Man films), produced by Steven Spielberg, Ron Howard and Brian Grazer, and with a screenplay penned by some of the co-creators and writers of Alias, Lost, and Fringe, the crew almost overshadow the cast, led by Daniel Craig, Harrison Ford and Olivia Wilde. These names, some of the biggest in Hollywood, know their medium, perhaps a little too well: the film works, but rarely surprises. 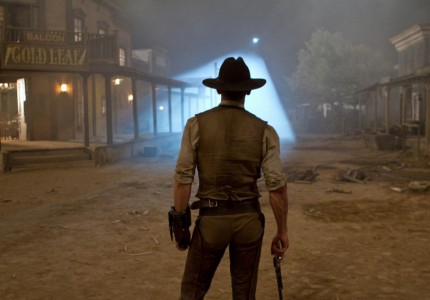 The film opens with Daniel Craig’s character waking up in the desert, alone, disoriented, with a strange device clamped to his wrist, an odd wound in his side and no memory. He stumbles into a nearby town, and attracts the attention of the townsfolk with his brooding stranger persona. He earns respect by subduing resident loudmouth Percy, the spoilt son of the town’s most influential resident, Colonel Dolarhyde (Harrison Ford), but the stranger soon finds himself in the next jail cell over from Percy when he’s recognized as wanted criminal Jake Lonergan.

As Lonergan is loaded onto a coach to take him to his trial, Colonel Dolarhyde arrives, demanding Percy’s release and custody of Lonergan, who robbed him. During the confrontation, the sci-fi elements invade the western scenario, as strange lights appear in the sky and rain down destruction. Percy, the sheriff, and many other townsfolk are abducted, and when the device on Lonergan’s wrist reveals itself to be an advanced weapon, he shoots down one of the ships.

A party made up of Lonergan, the preacher, the saloon owner, Dolarhyde and his men, and other prominent residents track a strange creature who escaped the downed craft, in an attempt to rescue the abductees. 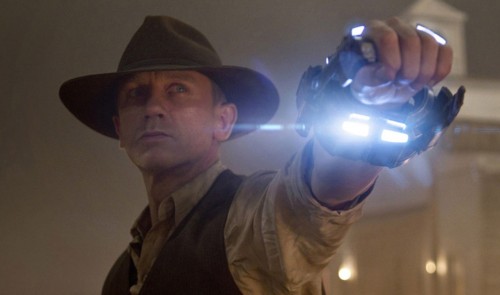 The elements of each genre integrate quite organically to create a satisfying whole, but it’s hard to ignore the idea that the novelty of the combination is used as a crutch to support two sets of stale genre conventions. The western story of a shady loner (the character’s name is LONERgan, very unsubtle) with a mysterious background causing a stir in town is not new, nor is the sci-fi story of people banding together to fend off an invasion by technologically advanced aliens. Painting them in the colours of a different genre makes them temporarily more interesting, but once you notice the sleight of hand, the magic is somewhat lost.

What’s more, the story of a protagonist with amnesia, whose background is slowly revealed through the film, is a cliché in any genre, and my pet peeve in films is also present: the scene where someone looks to be in grave danger, unarmed, with something or someone about to strike, and bam! The threat drops dead, revealing an ally standing behind them with a smoking gun. It’s a very cheap way to get out of an exciting situation, and it’s used too often in films. In Cowboys & Aliens, it rears its ugly, lazy head no less than three times!

The film begins to show some depth when the parallels to the white settler’s invasion of the Native American’s land become apparent. An invasion by stronger beings with better technology and weaponry is a situation the cowboys were familiar with from the other side, but putting them on the receiving end invokes sympathy. It was around this time that I also realised the title may be smarter than first assumed. Instead of simply listing the two cultural icons featured within, it could be a play on the old Cowboys and Indians coupling, with the power balance skewed. It could just be a coincidence, but I’ll give them the benefit of the doubt. 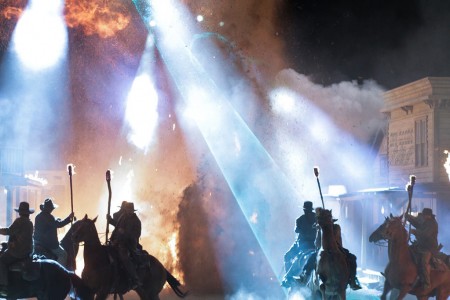 Visually, the film is quite gripping. The special effects on the alien characters, technology and weapons look great, but that is all but expected in films today.

The colour scheme communicates a lot, with the increasingly standardized orange/blue dichotomy in use. Distinguishing foes from friends by marking each as blue and orange is seen a lot lately, notably in Tron: Legacy, G.I. Joe and of course Avatar, and it’s used to the same effect in Cowboys & Aliens.

The early scenes are predominantly orange, what with the dusty desert setting and all. Once the aliens arrive, blue arrives with them, in the tinge of their spacecraft and the energy beams of their weapons. It fits quite well here though, as soon shots are skewed from the dusty orange ground to focus on the overbearing blue sky – also symbolic of where the invaders are invading from.

The music blends both genres together quite well. Mostly reminiscent of western movies, there is often a touch of electronic music sprinkled throughout, nodding to later events and giving the soundtrack a character of its own. Sound effects often seem a little over the top though. Particularly punching, which often sounds much louder and, for lack of a better word, crunchier than expected. 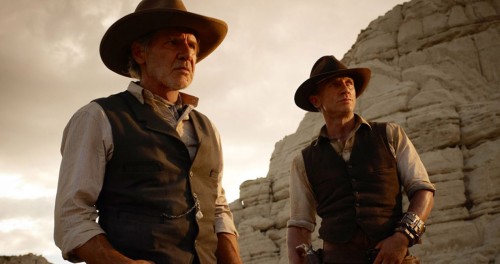 Cowboys and Aliens will inevitably attract audiences because of its interesting blend of genres and icons, and regardless of overused conventions, the film is action-heavy, which will satisfy many theatregoers. It relies on its unique combination a little too much; throwing two piles of clichés at each other doesn’t make them less clichéd. But it doesn’t necessarily make them any less enjoyable either, especially when done as well as you’d expect from industry giants like Spielberg, Howard and Favreau.