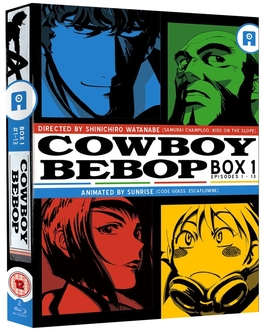 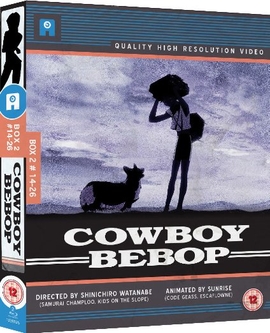 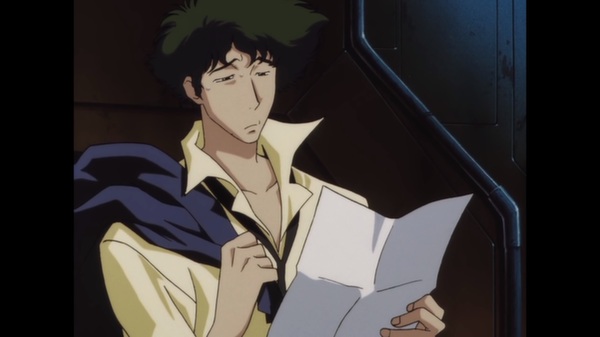 In the western world there are very few anime that are renowned among the general populous. Asking your regular Joe Smith on the street which anime they know, would most likely result in a dismissive shrug and an unenthusiastic answer of a random Ghibli movie and maybe a big shōnen like Gundam or Dragonball Z. Ever since Akira was deemed too violent by the parents of disappointed 80’s kids and Urotsukidōji brought with it the blind misconception that all anime is full of graphic tentacle sex, the market has been dwarfed to the point where it is hard for publishers to stay afloat. The good news is though that those children who were starved of the dystopian, motorcycling action that they craved are now adults and in a world where anime is beginning to become more and more popular with the aid of streaming services and social media networks, they are bringing with them the titles that shaped their love for the medium and one of the most influential series of all is Cowboy Bebop. This oddly named series resonated with western audiences at the turn of the millennium moreso than anything that came before it and ushered in a new era for the genre right around the time that I became concious of what anime was. Why this series though? Well, let me tell you. 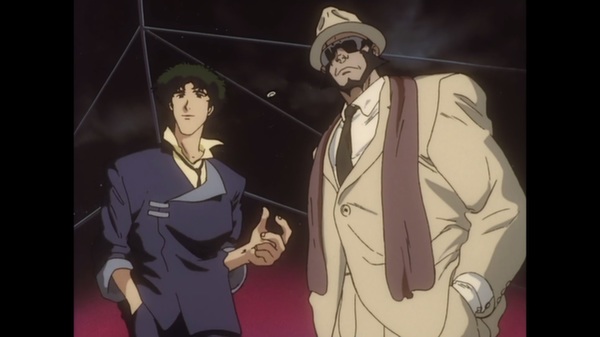 The year is 2071, and humanity has been spread across the solar system following the devastating explosion of an interplanetary travel device called a hyperspace gate. Moving away from Earth was essential to preserve the population, but on their new home of Mars it has proven to be impossible for the government to control the escalating amount of criminal organisations and terrorist groups littered around the galaxy. This is where the bounty hunters step in. Hunting down targets with a large sum on their head, bounty hunters wander the stars, rounding up bad guys whenever they’re running low on funds.

The series follows the wild lives of the crew of the spaceship, Bebop made up of: cool, ex-criminal and combat expert, Spike Spiegel; former ISSP (Inter-Solar System Police) detective, Jet Black; pro con-woman, Faye Valentine; mischievous hacker extraordinaire Ed; and an experimental Welsh corgi “data dog” called Ein. Taking a fairly episodic format, each twenty minute adventure tends to revolve around either a new bounty hunt or a foray into the tragic backstories of the crew and how that led them to become a bounty hunter. 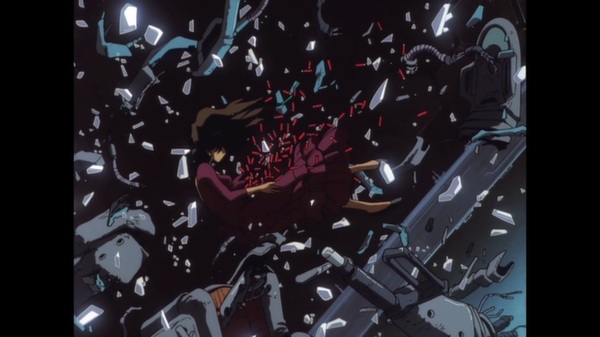 Cowboy Bebop is a breakneck  thrill-ride of an anime that you can’t help but get swept away with. It manages to do more in an episode than most anime achieve in entire arcs and it does so with masterful pacing, in-depth character development, and storylines that are innovative and a joy to follow. The whole show just exudes coolness in every respect, from its stylish 60’s film noir feel, right down to the masterful soundtrack that I will cover later, and its suit wearing, effortlessly charming main character, Spike. How it manages to combine comedy and high velocity space fights with its frequently dark themes and emotional depth is seamless to the  point where you don’t even notice a transition. This is because there is no need for it to explain itself at any point; aside from the pair of two part episodes, it never recaps, it never relies on flashbacks to previous episodes, it simply whisks you up in the action and doesn’t nurse you through it like so many other anime.

What Cowboy Bebop does so much better than its competitors is bridge so many genres so perfectly with such effortless finesse. By not focusing too heavily on any one element it manages to encapsulate action, adventure, comedy, sci-fi, western, and a myriad of other genres without ever feeling overbearing or going off track. Where Outlaw Star is very funny, it can lack severity. Where Space Battleship Yamato is very emotional, it can be too heavy for some audiences. Cowboy Bebop never tries to force the fact that it is funny and dramatic and yet still executes both vital aspects flawlessly giving it the natural, charming air that makes it so appealing to both teenagers and adults alike. 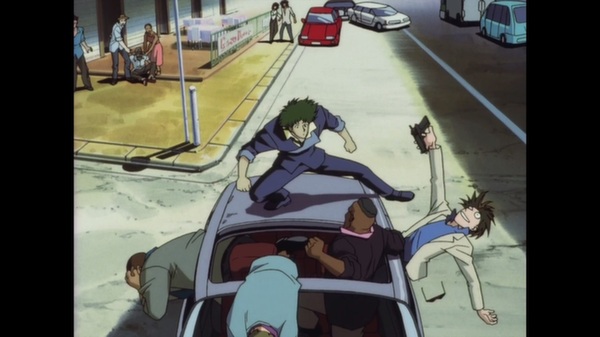 In this day and age where anime is churned out as if by a conveyor belt and diamonds in the rough are hard to come by, it is unbelievably refreshing to see an anime not adhere to archetypes as rigidly as modern shows tend to. Faye Valentine is troublesome for Spike and Jet, but since the show rarely focuses on romance she is never written as a generic tsundere or kuudere character and this gives the plot so much more freedom. Her actions are dictated by what is beneficial to the plot, not just a dictionary defined archetype that spits out reactions calculated by a brain-dead formula. The same can be said for Spike who despite a few typical ‘main character traits’ like his adoration of food, manages to remain impeccably cool. Underlying every character is a seriously tear-jerking backstory, even Ed who is essentially a comic relief character has walked a tragic path in the past . This brings a reality to the characters far greater than almost any other series I can think of and considering the fictitious, futuristic universe, that realism helps keep the whole show grounded.

Bringing this series to Blu-Ray at first might sound strange considering that Cowboy Bebop first aired in 1998. In the past, I have reviewed other anime from that late 90’s that have been brought back in DVD format, but most of them have looked dated to the point where they are nigh on unwatchable. Cowboy Bebop was never going to suffer to that extent since it was absolutely gorgeous at its time of release, but having watched the DVD release previously I can say with 100% confidence that the Blu-Ray is a godsend for the series. Unlike the DVD release which was noticeably low resolution, the remastered Blu-Rays have had meticulous care and attention put into recreating the series so that it lives up to modern day standards. Sure, it’s no Bakemonogatari or Shingeki no Kyojin, but as Kill la Kill has proven, it isn’t all about the visuals as long as it has style and solid writing. Some of the inbetween animation has the original backgrounds and not every character motion is as fluid as I might like it to be, but compared to the animation quality of 1998, it looks astounding. 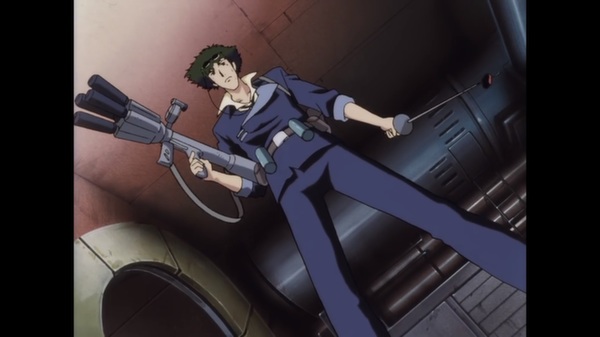 Every time Shinichirō Watanabe and Yōko Kanno get together something magical happens. 2012’s Sakamichi no Apollon is nothing short of a masterpiece and I still listen to its slick, smooth soundtrack as I stride around town with a spring in my step, reminiscing about all the times I cried and laughed with its perfectly written cast. What baffles me is that Cowboy Bebop’s soundtrack is just as good if not better. The iconic opening song ‘Tank’ ushering you into each episode with the line, “I think it’s time to blow this scene. Get everybody and the stuff together. Ok, three, two, one let’s jam,” followed by the blast of those powerful trumpets and the underlying jazzy walking bass line on the double bass is nothing short of spine-tingling. I get chills when I listen to that song and that is just the opening!

I was going to describe the rest of the tracks that you hear throughout Bebop as the diamonds adorning the crown, but for Bebop music is more than just an accompaniment, it is the soul that echoes through its very core. Without the shrill warbling of a blues harmonica, the raw power of a distant drum, or the pitch perfect vocals of a song threaded into a scene where most anime wouldn’t dare let music take centre stage, Cowboy Bebop would not be the same masterpiece that it is. Watanabe’s belief that, “music is the universal language,” is one that I share and Cowboy Bebop is a glorious testament to that belief. 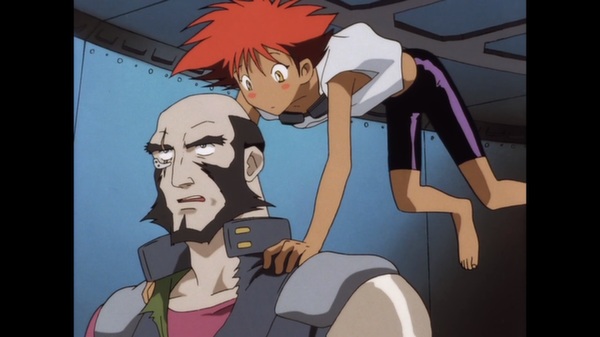 “Lolis in zero gravity – Not one of my better ideas.”

Believe the hype. Cowboy Bebop is known worldwide for its mastery of the medium for more reasons than I could possibly squeeze into this review. It is about as flawless as an anime can get and it is rare that I ever end a review without a single negative comment. Even the box art is nice, I can’t even criticise that! It sits there looking cool and sophisticated from the spine and then BAM the colour erupts into your eyes the second you  turn it over and that is exactly what Cowboy Bebop is, impeccably stylish, but with the action and excitement to back it up. Maybe the answer to ‘saving anime’ doesn’t lie in series that force themselves to be different. Maybe all it takes is a look to the past at a crew 58 years ahead of our time. 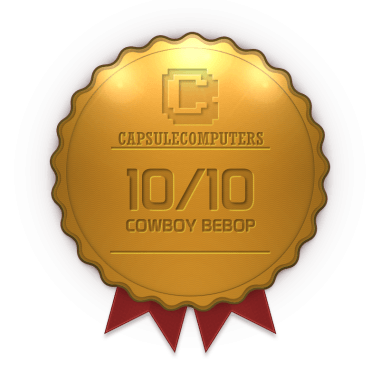