Cosmic Bump. It looks like Angry Birds, is cute like Angry Birds, and does its best to not be like Angry Birds despite being obviously inspired by the portable gaming phenomenon. Chillingo’s latest release is definitely not the most original idea out there, but can solid gameplay foundations pave the way for a successful lift-off, or is this spaceship going to crash before it even leaves the launch pad? 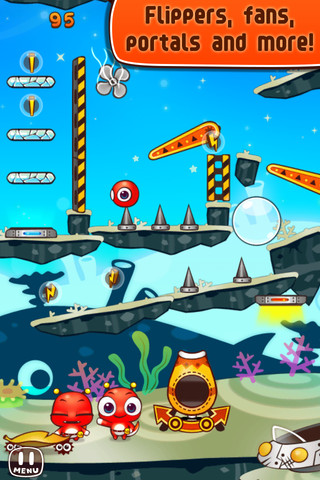 Cute, furry bir… er aliens, have run out of battery power for their spaceship and have crashed onto various planets that serve as stages for levels upon levels of physics-based puzzling fun.

Yes, the keyword there is fun. The game may be similar in concept to a lot of other titles on the iOS platforms, but Cosmic Bump manages to draw you in like very few other games. I’ll admit I went in pretty sceptical… 45 minutes later I had to get off the train and stop playing, but I just didn’t want to.

The game excels in its simplicity.

It’s so easy to pick up and play: each level is vertical, as in you hold your phone like you normally would, not in landscape mode. At the bottom of the screen is cannon in which you load your cute aliens; slide your finger left and right to change the cannon’s direction and swipe down to change the power of your shot. Your aim is to collect all the little battery power orbs floating around the map while using as few aliens as possible. 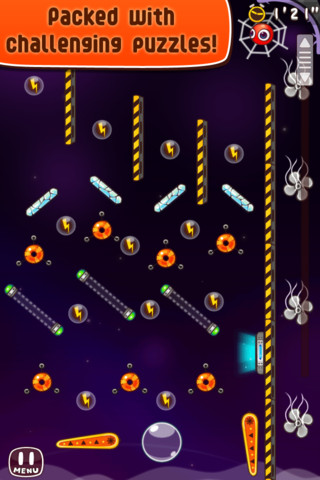 That means that each and every level is actually completable with just one, well-placed shot, and getting that shot off is not only immensely satisfying, but it’s also rewarded in game, as Cosmic Bump borrows the three-star trope from other games, but the system by which you get the stars is much easier to understand. Use just one alien, you get three stars, use two and you get two, use your third and last alien and get one.

Of course, it’s not as easy as it sounds. As you progress through the game’s levels you’ll encounter various obstacles and mechanics that help or hinder your cause. The most obvious are barriers that you’ll have to try and avoid with well-place wall bounces when you shoot your aliens out of the cannon. There are also flying saucers that operate a lot like barrels in Donkey Kong, in that they’ll move around, waiting for you to tap the screen to release your alien. Time it right, and the saucers will help you clear a level with impressive style, but time it wrong and you’ll cringe as your alien goes splat on the ground below. There are also pinball-esque flippers and bounce-pads which you’ll either need to use or avoid based on the level. 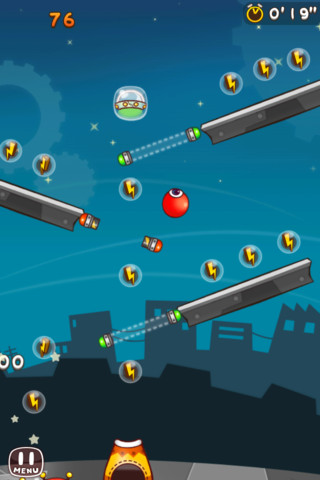 Essentially, Cosmic Bump takes a simple gameplay formula that could be called a cross between Angry Birds and Peggle and adds little twists and complications that make for a dreadfully entertaining time. It’s odd, when the idea behind a game is so simple that really anyone could have come up with it, that it just makes you want to keep playing. I never found myself bored, and, dare I say it, some of the puzzles actually gave my brain a little pause before I could figure them out. That’s not to say it’s hard, but Cosmic Bump isn’t out to pander to your children. It’s a game which, much like some other great iOS games, revels in simplicity and is all the better for it.

Yes, it looks like a cartoon. At this stage complaining about the lack of distinctiveness in the art styles of iOS games  is practically a moot point. Cartoon sells, so it’s what developers keep doing.

Thankfully, Cosmic Bump is not a lazy cartoon style. It’s not the crummy kind found in some other titles, the kind that makes it look like the art director was a 16-year-old boy using Java in his mom’s basement. That’s not to say the graphics are fantastic, but they are definitely not a slopped together mess of colours. The art does the job, and the cutesy aliens will definitely get a “nawwww” as you watch them splat unfortunately on the ground when you mess up. 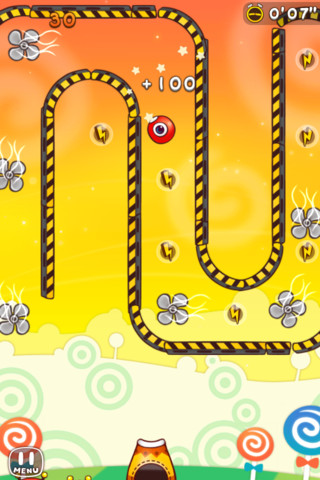 The game’s background music is catchy while you’re listening to it, but it’s not annoying/good enough to be stuck in your head for hours. An honourable mention once again goes to the design behind the aliens dying. The “sploosh” is cartoony enough that you don’t cringe, but boy do you feel it when you make a mistake.

Cosmic Bump is not a game that will be raved about at the end of the year, nor will people recall it for its originality and great strides forward. What it does provide is a simple experience that’s all about fun. There’s nothing more satisfying than successfully clearing a level with three-stars. The game’s all about style, and it makes you feel like a pro from the moment you pick it up. It’s not going to change your gaming life, but Cosmic Bump will give you exactly what many iOS gamers are looking for: some fun bang for your hard-earned buck.