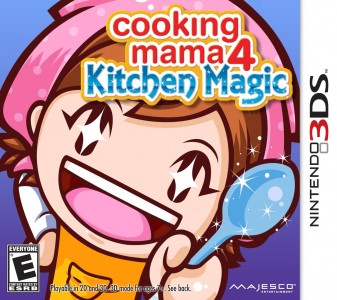 Overview
After dominating the Nintendo DS and seeing 10 successful releases thus far, you would think Mama would be in need of taking a long day off. A mother’s work is never done though and there are always hungry mouths to feed, which is exactly why Majesco have brought their gaming heroine of sorts into the third dimension with Cooking Mama 4: Cooking Magic. In this brand new title, Mama returns to her roots and is ready to cook up 60 new recipes in full 3D. This sequel is also out to impress, with an added in gyroscopic control, extra modes, and a handy customization feature. The question is, is this follow-up as delicious as it’s predecessors or has this series been in the oven too long? 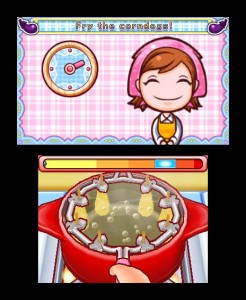 Gameplay
After all of the Mama games we have seen to date, I really shouldn’t have to go into detail about how Kitchen Magic plays. Your job is to assist Mama in cooking up recipes by completing mini-games. As usual, the most utilized tool is the stylus, where players will have to slice, stir, and fry up food in timed events. This main method of movement is starting to feel a bit dated, but I doubt many fans will have much of a problem using the touchscreen as taking away the touch controls in a handheld Mama game would almost be like telling Mario not to jump. There is some freshness to be found here though, as Cooking Mama 4 has taken advantage of the 3DS’ gyroscopic controls. This lets players tuck their pens away for brief periods of time and actually move the 3DS to prepare a dish. We’ll touch base more on that in a minute, but for now, let’s talk about the main ingredient within the game, the food.

In the main mode, players will be asked to help cook up a dish, one ingredient at a time. Everything feels a bit more detailed this time around as well, as to make a Salsbury Steak, you will need to grind the meat, peel and chop onions, perform a stir fry, crack and mix eggs, make your own breading, and then mix everything together and cook it all up to perfection. This may sound like an elaborate exorcise, but one has to respect how much content that has went into making each dish. Not every recipe is as thought-out, but conjuring up each one felt like a realistic process and thankfully, the mini-games to get the player from start to finish are quite enjoyable to start with. 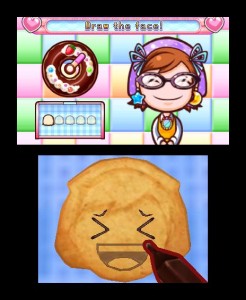 On the topic of the mini-games that are utilized to create your culinary masterpiece, there is a good variety to chew on. These little romps are usually crafted to test a player’s timing skills, memory, or to have you perform accurate stylus strokes in order to cut an ingredient…just to name a few. The standouts of the over 200 offered are without a doubt the games that use the gyro control method. Every wanted to actually shake your DS like a skillet as you fry up some food? Now you can. Players can also rock their 3DS back and forth to batter their ingredients or perform small shakes to mix items up a bit. This new gimmick for the series isn’t that complex, but it actually works well and fits in perfectly with the casual nature of the bite-sized games found within. 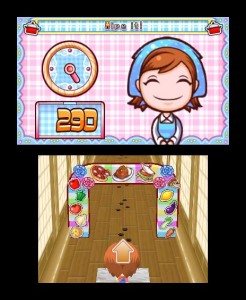 Simply helping Mama in the Kitchen would be enough to hold most over, but this matriarch has a few other offerings up her mitts to extend the life of the game. The “Let’s Combine” mode lets players take two completely different dishes and put them together in one quick yet enjoyable side-game. As odd as it sounds, this plays out a bit like Guitar Hero as the player must tap on falling entrees at the appropriate moment to have them combine with the plates found at the bottom of the screen. These creations can be as bizarre as you like as well with players having the freedom to mix certain dishes with any of the unlocked recipes found in the main game. From Spaghetti and popsicles to Corn Dogs on pizza, if it’s available, you can combine it. Making all of these exotic foods can also cause a mess and a “Let’s Help” mode has you complete small tasks to assist Mama with all of her chores around the house. Both of these little extras aren’t as elaborate as actually cooking, but I found both to be a nice bonus and a refreshing change of pace in comparison. 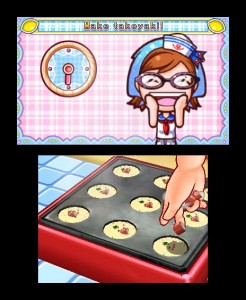 Like nearly every other title in the franchise, Cooking Mama 4 rewards more content to those who finish the creations they start with. Each time you complete a task of almost any sort, new content is given as an incentive to keep playing. Yes, more recipes and mini-games are pretty much a given, but other unlockables to be found can even let you change up Mama’s appearance, cooking sets, and backdrops in-game. Add in the local multi-player that allows up to four players to cook together to all of the dishes and side-games already packed in and it becomes clear that this is certainly the largest and most ambitious Mama title in the series to date.

Visuals/Audio
Mama hasn’t aged a bit since her debut on the Nintendo DS. Still sporting that classic bandana, those familiar with the series will find that all of Mama’s charms and quirks are still present in Kitchen Magic, with newly added animations and minor touches to make her character even more endearing. If you happen to miss in a timed mini-game, you may see your ingredient fly up and pop Mama right in the face. Messier foods like bananas or desserts can even stick to her pouty cheeks and the player can then get to feel a bit of guilt as Mama brushes off the incident in a brave manner. I never really thought I would ever say that “I hit Mama in the face with a hot dog…in 3D!”, but after playing this title, I’ve got something new to brag about.

The 3D aesthetic isn’t really a huge addition to this sequel for the most part. Certain foods can be seen flying around on the top screen and black smoke looks particularly well done when a dish is burnt, but the game as a whole doesn’t really try to force players to keep the slider up as the 3D effects are subtle at best. That isn’t to say that this title doesn’t look good on the 3DS, as the 3D is still a stand-out feature and is well implemented. However, if you are eyeing Cooking Mama 4’s visual treats, thinking the 3D will come together with the actual gameplay, you might be a bit disappointed as the 3D offered is just extra eye candy and nothing more. 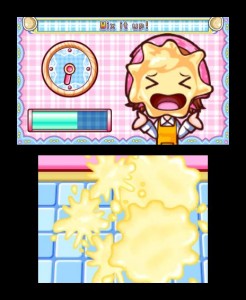 As far as the music in the game goes, most should expect to hear the same variety of upbeat tracks from the past. These tunes fit in well and help capture that upbeat nature the series is famous for without much problem. Little sound effects like hearing onions sizzle in a skillet or meat squish in the palms of your virtual hands also go a long way to make the cooking experience here feel fulfilling. As far as the voice acting goes, Mama still has her broken English dialogue and is as loving as ever, constantly complimenting the player or reassuring that “Mama will fix it!”. Sound-wise, there hasn’t been a whole lot done to bring this game into a new platform and even though everything sounds great, I feel Cooking Mama Limited need to start paying this voice actress to start reciting some new lines as the same old lingo is starting to get tiresome.

Overall
This is Mama’s first title on the 3DS and after it was all said and done, I must say I was impressed by everything Kitchen Magic delivers. With more mini-games, recipes, and content than we have seen before, there is a ton of reason for fans of the series to snag up this upgrade without hesitation. With that said though, the series as a whole is starting to age and while the extras and 3D visuals in Cooking Mama 4 are a step in the right direction, some might feel like they are getting the same experience they received in previous offerings. Of course this game isn’t targeted towards a hardcore crowd that is going to put a lot of thought into all of that though, as at the end of the day, this title still falls under the casual category. However, if you are looking for a delightful and equally meaty addition for a growing 3DS library, this magical kitchen has all the ingredients to keep your hunger at bay.