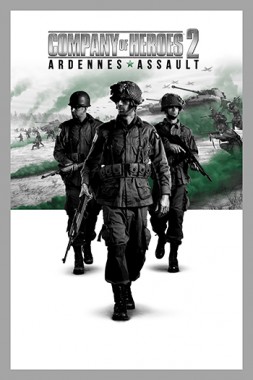 Company of Heroes 2: Ardennes Assault is the second expansion pack for Company of Heroes 2. The pack is standalone and does not require the base game. The first expansion pack introduced the western front armies to multiplayer matches. Ardennes Assault follows up with an 18 mission long single player campaign. Players are given command over three companies, each with unique abilities, to tackle the missions in whatever order they choose. 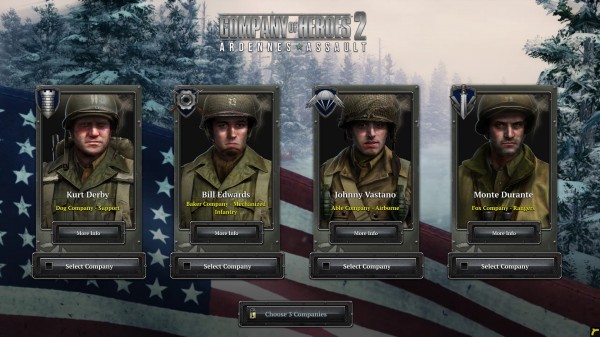 Company of Heroes 2: Ardennes Assault takes players to the winter of 1944. The Nazi army launched a daring offensive through the Ardennes region in hope of splitting the Allied forces in half and turning the war around. Now the three companies are tasked with repelling the assault and recapturing lost territory. The plot loosely retells the events of the Battle of the Bulge. Most of the story is told through the cut scenes before each mission and the debriefing provided by the company’s commander. The cut scenes are made to mimic the war time news reels shown back in the US, while the debriefing are read out by the company commanders and differ depending on the commander. 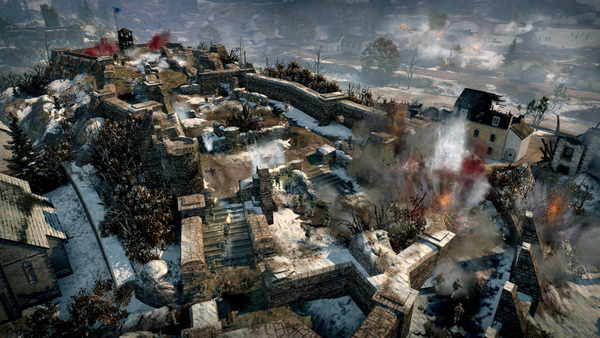 Relic Entertainment does a great job with Company of Heroes 2: Ardennes Assault’s writing. The news reels perfectly replicates the real thing, using the correct language and the patriotic tone that glossed over the horrors of war for the viewers at home. The debriefings help build characters to actually care about, something missing in many RTS titles. Young Lt. Vastano is clearly out of his element typing up his after action reports, after being thrust into handling the bureaucratic matters following the disappearance of his CO. The grizzled WWI veteran Capt. Derby prefers to decompress after the battle by confiding in the company chaplain, while the young upper middle class Capt. Edwards contends with US Army censors as he writes home to his father. The small details are not forgotten by the writers. Units chatter among themselves, respond to commands, and alert commanders of current events. The lines feel torn out of Saving Private Ryan and other classic WWII flicks. 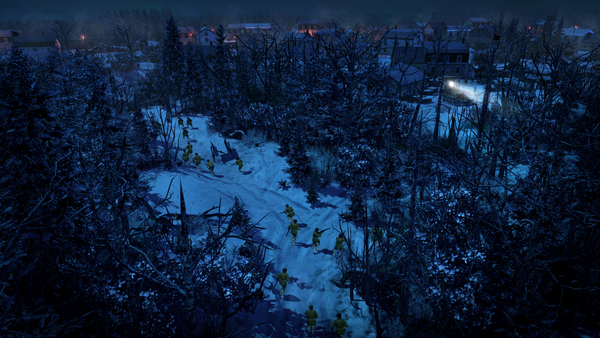 Company of Heroes 2: Ardennes Assault is composed of two phases. The campaign map will have players moving their three companies around the Ardennes region, attacking German held areas. During this time, players can spend requisition and experience points to add reinforcements to their companies and upgrade each company’s special commander abilities. Bringing in new troops will cost experience, so veteran levels and company strength needs to be balanced at all times. This forces players to be mindful of their units, as losing too many units in the early part of a game may result in being placed in a difficult position later in the campaign. A company that loses their company strength will be wiped out.

Although the campaign is open ended, players will probably tackle batches of mission based on difficulty. As Nazi troop levels rise, the AI will have access to extra resources and will put up a harder fight. Once a map is defeated, the surviving Nazi forces will attempt to flee to the closest German stronghold, possibly increasing the difficulty in the next round. As players move around the main map, special events may trigger, encouraging players to attack a certain map due to weakened enemy strength or promise of a new unit. 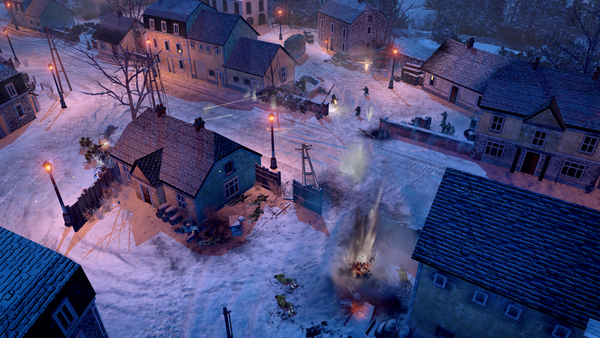 Company of Heroes 2: Ardennes Assault focuses on the tactical combat on the unit level. Base building is practically non-existent, with each commander getting a small base right off the bat. Higher level units in the tech tree are unlocked by summoning an officer unit to the battle. Infantry units serve as game’s bread and butter, as many can be armed with light machine guns, grenades, and anti-tank bazookas. They can even hop into disabled vehicles or take control of abandoned heavy weapons left by enemies. There is a strong emphasis on combined arms tactics, as vehicles are ever so weak against infantry manned anti-tank guns and bazookas. Smart commanders will need to micro-manage units to maneuver them into cover. I found the AI was ok at taking cover, but could not reposition themselves behind new cover to respond to a flank attack or jump behind nearby cover beyond a certain range.

The game benefits from the fact Company of Heroes 2: The Western Front Armies was released over five months ago. The units are balanced very well. Battles require commanders to create well-rounded squads that have their weaknesses covered and encourage players to create opportunities to gain the upper hand by targeting enemy vulnerabilities. Send in tanks without support and they will get slaughtered by anti-tank guns, but send in riflemen with grenades into the same built up area to quickly destroy anti-tank guns will allow their supporting tanks to roll into the base and slaughter the enemy with ease 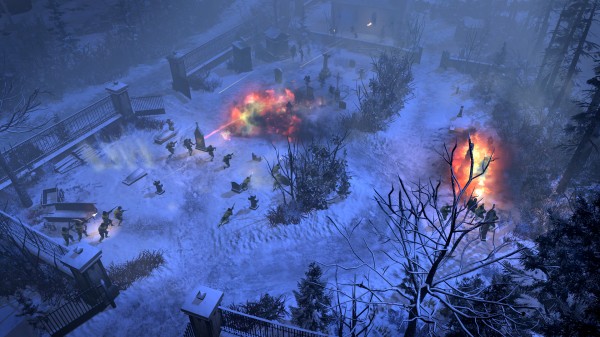 There is a decent variation to mission objectives. Many of them start as a capture and control type mission, with randomly generated optional objective or two added for good measure. However, Company of Heroes 2: Ardennes Assault is at its best when creative curve-balls are thrown into the works. One of my favourite missions was a spin on the capture and control. It sent me racing around the map in a desperate attempt to capture airdrops randomly dropped around the battlefield at set intervals, while both the enemy commander and I were being choked out of resources at an alarming rate. The randomly generated optional objectives are not nearly as interesting. They all boil down to going to a certain part of the map and collecting intel, killing a VIP, destroying a crippled tank, or rescuing pinned units. They become very predictable after the third or fourth mission. 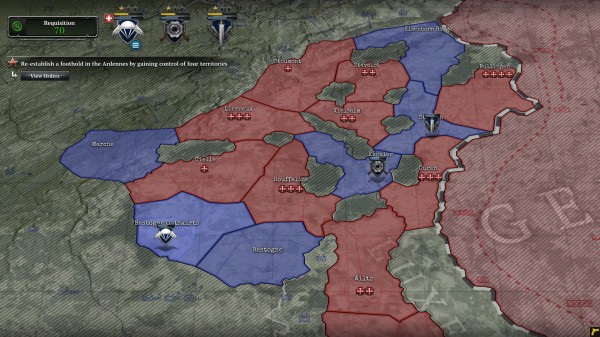 For the most part, Company of Heroes 2: Ardennes Assault is very stable, but it is not bug-free. I experienced a very serious bug in Company of Heroes 2: Ardennes Assault that caused a two maps to not load at all, making me unable to complete the game. The remaining were all minor things, like AI running around back and forth in small on rare occasions, clearly unable to decide what to do or how to get out. 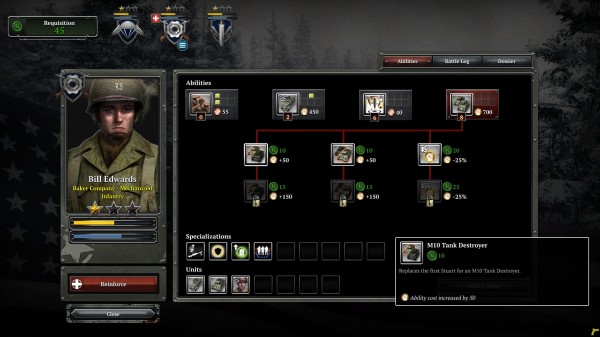 Company of Heroes 2: Ardennes Assault is still looking good, almost a year and a half since the base game was originally released. As an older game, the minimum specs aren’t too high and the game ran well on my computer. I love small details like how each infantry units have members who will die as the unit take damage. The maps are populated with lots of objects, giving infantry units plenty of places to take cover and keeping the maps looking lively. The animations are solid and the UI fits perfectly with the WWII theme. 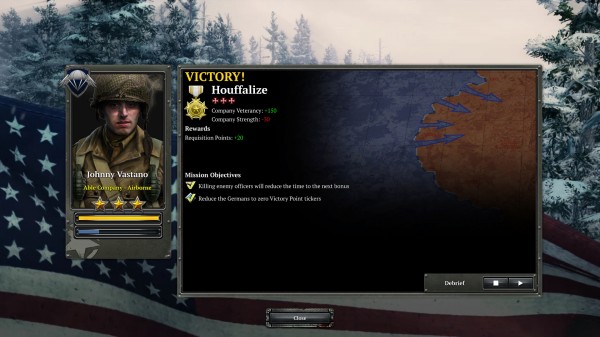 The voice acting in Company of Heroes 2: Ardennes Assault is solid. The accents are mostly spot on, though there are a few rough spots. The sound effects sound great and the music serves as a nice backdrop to the game.

Company of Heroes 2: Ardennes Assault is a solid single player campaign. The units are balanced well, the missions are interesting, the graphics are lovely, and the sound design is solid. The 18 missions are too short for $39.99 asking price, especially since the multiplayer Company of Heroes 2: The Western Front Armies expansion is not included. The replayability rests only in the higher levels of difficulty, as the randomly generated optional mission goals and playing the same maps in different orders, which make the high price even harder to swallow. Ardennes Assault is worth picking up, just at a lower price.