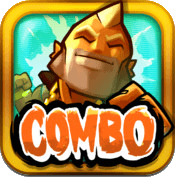 Overview
Streets of Rage, Final Fight, Double Dragon. All evoke a distinct sense of nostalgia that could only come from a classic beat ’em up. Typically, the words “beat ’em up” are the furthest thing in our minds from a touch device. So how does Combo Crew, the iOS beat ’em up from The Game Bakers stand? Is it a knockout or does it deserve to get shivved with a broken bottle? Let’s find out. 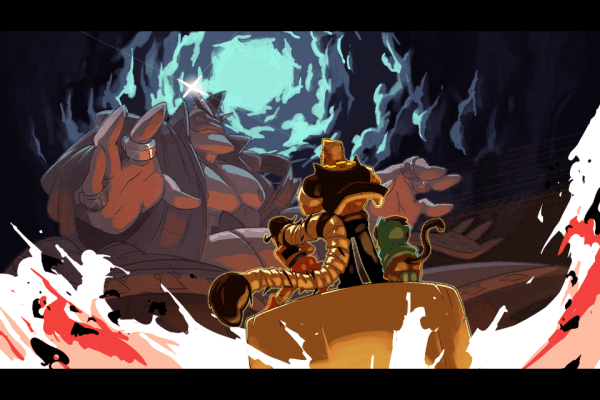 Story
In a world where everything can be solved with the power of your fist, one man has everything. That man is Mr. Boss. He owns a huge tower with his own name on it, he has plenty of money, but he still lacks. He wants nothing more than to beat the three best fighters in the world. Those three fighters are Gina, a student of hair-jutsu, Dolph, the greatest action hero ever, and Parker, whose name tops the leaderboards of every arcade machine across the country. Dolph, Gina, and Parker will have to work their way to the top of Boss Tower and prove to him once and for all that they’re the best fighters in the world.

Gameplay
When gamers think of beat ’em up games, we tend to wax nostalgic. Whether it was Double Dragon, Streets of Rage, or Final Fight, folks who’ve been around this industry from the 8-bit days immediately know what you’re talking about. Games like these typically consist of walking around, beating up a few street thugs, syndicate lackeys, or crime lords, and using every weapon and environmental hazard available to make that happen. 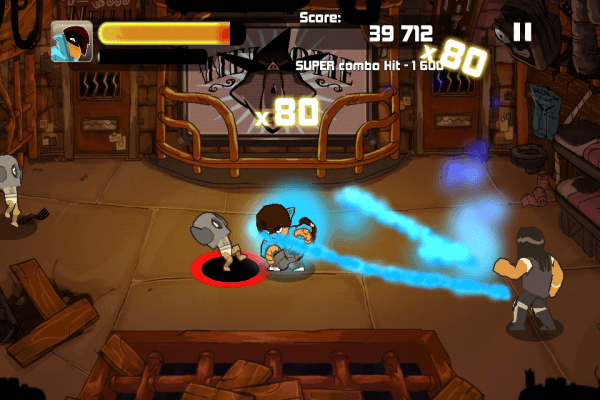 What Combo Crew lacks in tactile feedback (i.e., a controller with buttons), it more than makes up for with crazy combos and absolutely satisfying brawler action. Players will use swiping on the touch screen to target and attack their prey. A few quick swipes and your tossing a 1-2 combo at some garage band groupie. If they block, swipe and hold it to charge up a strike that will break their defense. When all else is left open, use two fingers to swipe in one of the cardinal directions, unleashing a combo to lay the smackdown to the enemy.

Combo Crew does a fantastic job handing you these tools of destruction and letting you get to work without overwhelming you. There are a few distractions they’ll toss at you, though. You’ll often find yourself in the midst of six or seven enemies. From time to time, an enemy will decide to come in for a strike while you’re preoccupied. This is indicated by an exclamation point (!) over their head. Make sure you stop them or get out of their way! They’ll break your combo meter, and that’s bad news. Building up a high enough combo meter will also allow you to unleash a special attack where you swipe your finger around the screen and your fighter follows the path of your finger, throwing a shot or two at any baddies in said path. 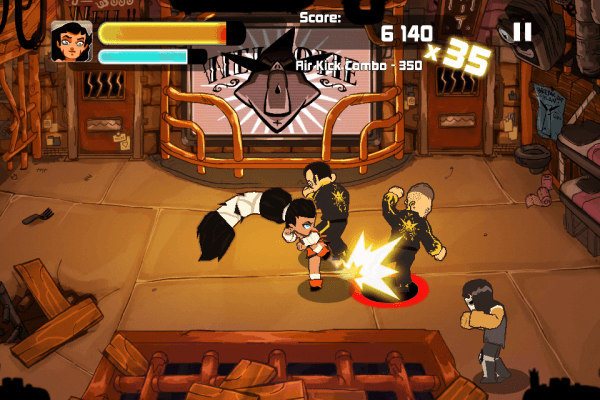 As you play through levels and tear away at guys, you’ll be judged on score. For each successful attack you land, your score multiplier will increment itself by 1, allowing you to rack up big scores quickly. That enemy attacking you I mentioned earlier? It doesn’t matter how high your combo meter, if you fail to stop your assailant the multiplier is reset to 1 and you have to start it all over.

High scores actually have a real consequence as you play through the main game mode, King of the Tower. You’ll earn enough to be awarded bronze, silver, or gold, with the golden ranking often giving you a video game controller as a reward. The game controllers can be cashed in to get a couple of new fighters as well as new combos for each of your fighters. This makes working toward perfection and a high score feel completely viable – not just some other screen decoration to show the players. King of the Tower also offers quite a bit in terms of playtime. There are 35 levels to work through, with a boss encounter for each major location. The change of scenery is welcome and the boss encounters provide something you don’t see the rest of the time. 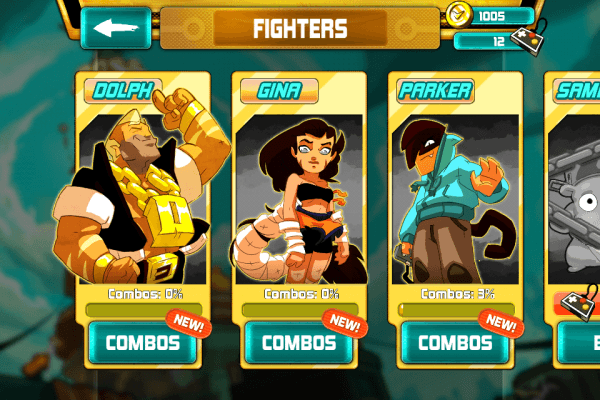 On top of King of the Tower, there’s a game mode called the Combo Crew Mode. This is basically your endless survival mode. You’ll work your way up the tower with a single life gauge, never getting healing items or a refilled health meter. This is where the game also starts to press you for social media. If you can get a Facebook friend to jump in and help you out, you’ll be healed. Combo Crew mode is a lot of fun and really offers a fair challenge, but the inclusion of the social media is completely unnecessary.

The game also provides every single bit of content at the sole expense of your time and effort. Microtransactions blissfully find themselves absent here. For a beat ’em up of this quality, such a thing would only water down the experience. 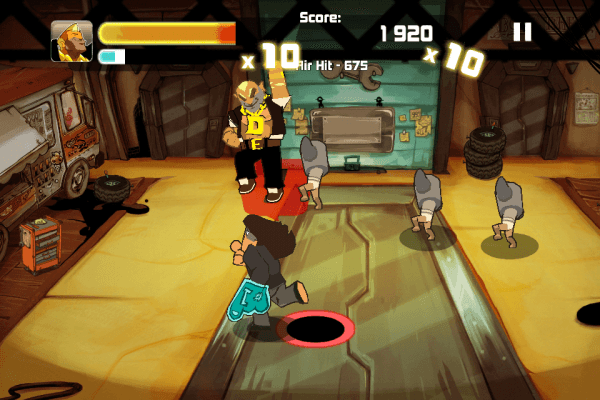 Visuals & Audio
Combo Crew is a fantastic looking game. It provides a 2-D world with polygonal characters. The cartoonish art style is quite well implemented. The combatants stand out without feeling too garish. It feels like you’re watching an intense fight scene from a Saturday morning cartoon, but each flash and crack carry a great sense of weight.

The audio tracks in the game are nothing particularly spectacular, but they fit the setting and mood wonderfully. The theme music sounds right at home with other notable games of the genre, the narrator does a fantastic job conveying the feel of the setting, and the sound effects accentuate a great package.

Overall
Overall, Combo Crew is a rare gem. Typical beat ’em ups and brawlers feel like they should be exiled from the touch device market, but  The Game Bakers have done an excellent job with the brawler recipe, adding a dash of their own flavor that gives the game something special. On top of excellent, addicting gameplay, the game looks fantastic and sounds like it belongs in an arcade cabinet. Though the rare graphical hitch can throw off your timing, it’s not worth keeping this game from claiming a place among the greats. With a few added unlockables, customization options, and well implemented game modes, Combo Crew proves that it deserves to have fans that can look back on it with a smile for years to come.