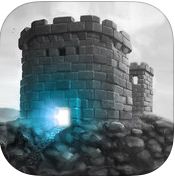 We’re now living in the ago of gaming where people want something totally brand-new but they also want something old-school, something that will remind them of their pasts and, you know what, some companies are actually pretty damn good at fusing the new and the old into a great game. “Coldfire Keep” developed and published by “Crescent Moon Games” is definitely a game that fits into the what was said in the above sentence; it’s a game that will remind people of the adventure titles of their youth while also giving them just enough to be able to enjoy it in a day and age where high-definition gaming is a must. Unfortunately for everything it does right it also does some things wrong but you can read more about that in the bulk of the review below. 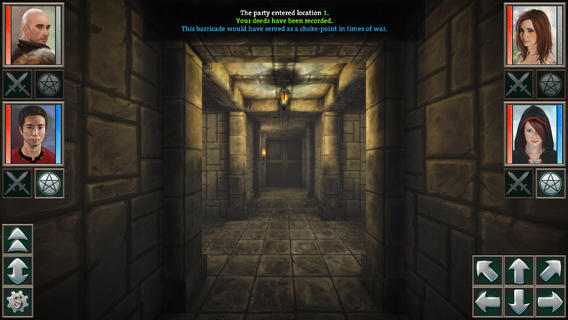 “Coldfire Keep” seems to have the type of story that, despite its taking a back seat to whatever smaller storyline or mission you’re currently working through, it continues to loom overhead while it constantly reminds you exactly where you’re heading and what all this adventuring is going to lead to. It’s the story of an old castle that, long ago somewhere through time, saw a mighty war take place. Many hundreds of years later the castle now serves as nothing but a reminder of what happened long ago though something strange has been happening within its walls as of late and, after a rogue monster trashes the nearby town, four heroes set off to find out exactly what is happening in the dungeon of the castle and how they can stop it before the forces of evil once again take reign over the land.

In my opinion the backstory for the game was glassed over fairly swiftly, it came in the form of a few paragraphs to read and told only the bare bones of what exactly happened so I’m lead to believe, as a player, the focus was not so much on what happened in the past but what you as an adventurer playing the game will make happen. It is a story that begs the player to create his or her own story through their decisions. At least, that’s the vibe I got from it. You get to choose your own team; what they look like, their combat classes, their battle statistics and even their names so I imagine it was a purposeful choice by the developers to make the story somewhat vague. The nice thing is that you know what your mission is throughout playing the game but it’s not always in focus, speaking adventurously…it makes sense. 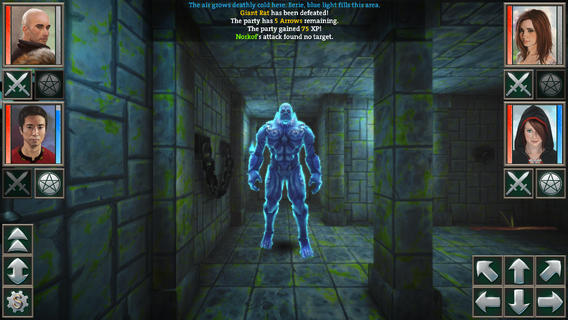 Playing through “Coldfire Keep” as someone who did not grow up enjoying old-school dungeon crawling, first-person, adventure games I found it quite…tedious. As mentioned, you’re placed in first-person view and all you really need to do is move around dungeons using either gesture controls or classic controls like arrows and buttons which can be changed in the option menu of the game. Characters, depending on their class, can use physical attack and/or magical attacks to thwart enemies but it seems as though the game doesn’t entirely have its combat system worked out seeing as you miss your attacks most of the time while enemies continuously land hits and you that deal more damage than you would have assumed. Essentially you travel through dungeon floors, dodging traps, finding secrets, fighting enemies and advancing lower and lower doing the same thing again and again.

Now I’m not going to say this game is “broken” but I will absolutely say that the developers clearly have things that they need to figure out. Things like the battle system, as I briefly mentioned above, really have some kinks that need to be worked out; enemies do an amazing amount of damage to player characters, It actually took me a couple of hours just to play through the first few floors simply because none of my hits were landing yet every enemy had laser accuracy. My characters were killed in a matter of a few turns and it wasn’t like I was fighting enemy demons or anything as extravagant as that…I was killed by rats.

It was also extremely difficult to pick up items, the controls were mostly unresponsive and what was supposed to be a double tap to pick-up an item turned into 8 or 9 furious taps of frustration. If only I was over exaggerating…I played it while sitting around with some friends one night and as my frustration boiled over and I began hitting the screen one of them turned to me and said “Frank, contain your excitement” in a sarcastic manner, that is truly how hard I was tapping the screen. Look, I can honestly see why people would enjoy this game. It takes a great deal from old-school fantasy and adventure titles, essentially it is itself in a pure form and I can see that. 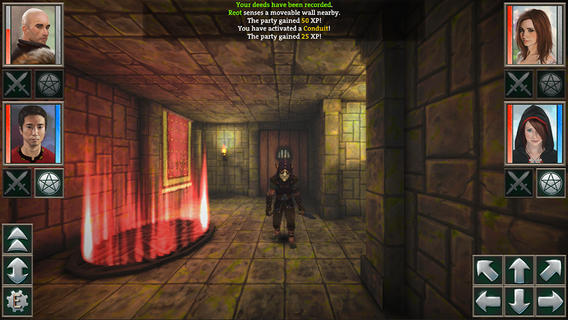 For the most part I’d say that “Coldfire Keep” is a fairly good-looking mobile title. It doesn’t do anything overly spectacular and pretty much sticks to the basics when it comes to visual representation of certain things but I believe that is what gives it the feel of an old-school title. I can see it having a nostalgic look to it but, unfortunately, since I never played these types of games years ago I cannot directly relate to that feeling. The game doesn’t really give you a chance to get bored of the environments because they’re constantly changing and throwing different obstacles and traps at you so you never really get too much time to get sick of it.

Something I didn’t particularly like was the colour choices for the text throughout the game. Like most aspects of this game it was fine for the most part but there were certain pieces of text that were coloured flouro green or yellow that really stood out, especially in a game where you’re meant to believe you’re in some dark and dingy dungeon, it just didn’t fit with the theme. It mixes some nice old-school style layouts and models with an upgraded kind of graphics system and it’s hard to be angry at something like that. 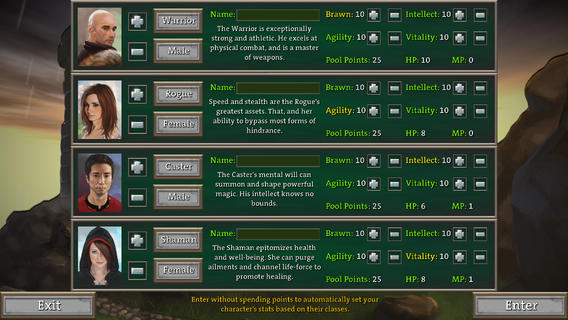 The game, kind of, ditches a soundtrack to instead focus on environmental sounds like the dripping of water or the squeaking of rats which I’ve experienced in other games that do it incredibly well, “Coldfire Keep” on the other hand doesn’t do it as well as it could. Do not get me wrong here, I’m not saying that it does a terrible job when it comes to environmental sound effects, all I’m saying is that it could use some work. A great deal of mobile titles try to give players an opportunity to immerse themselves within the game, sometimes they choose the auditoral road wherein which they advise players to wear headphones because they’ve put so much effort into the sound and I think “Coldfire Keep” could have done it closer to how others have, it definitely would have made the game more engaging and possibly even a little bit scary. Music would not have helped this game, maybe just a little more attention to detail and it would have been golden. I’ll say one thing; the voice acting was quite a pleasant addition to the game, though there was no actual spoken dialogue, there was the occasional “arrgh” or “aaahh” when being attacked and they sounded pretty well-acted to me. 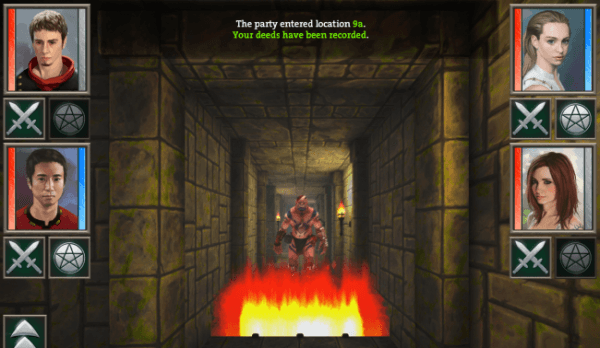 My job as a reviewer is to look at games from all different angles, I tried very hard to enjoy this title but there were far too many problems to even begin enjoying it. Maybe had I had some experience within this genre as a child or pre-teen than, yes, the nostalgic value of an old-school-style title such as this would have raised the enjoyment level quite a bit but as far as it goes actually being a game…it’s powerfully average. It’s not great and it’s not terrible, it’s just kind of good.

If some of the gameplay elements where tweaked and changed even a tiny bit I can imagine people (including myself) would enjoy this game so much more. Once again, these opinions are mine alone so most of you out there who are still reading this may absolutely love the sound of it, if you do than I suggest you go out and buy it in the hopes that there will soon be an update to fix the slew of semi-broken aspects with the gameplay. I don’t enjoy being harsh but I have to be honest. It’s a great game but if definitely needs work.