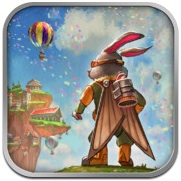 Overview
Enter a beautiful world high up above the world. Now throw in a rabbit…and a jetpack. Awesome. Soar through the skies and get the highest score you can. Ever wondered how well a a rabbit can fly? Probably not. But let’s find out anyway. 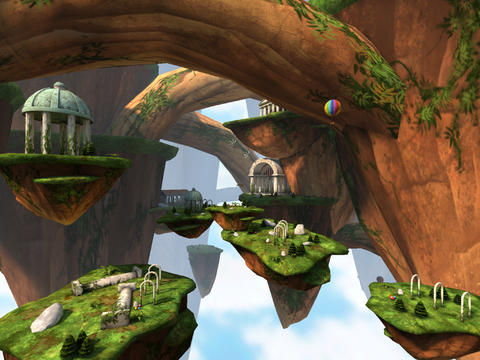 The land above the clouds

Story
“You play as Lucky, a fearless adrenaline-fueled rabbit trying to etch his name in the pillars of history as the greatest competitor to ever live!”
Pretty much sums it up…

Gameplay
The controls of Cloud Spin are very simple. Simply swipe the screen with one finger to alter course. Placing a second finger on the screen grants a fairly significant speed boost, at the cost of precision. 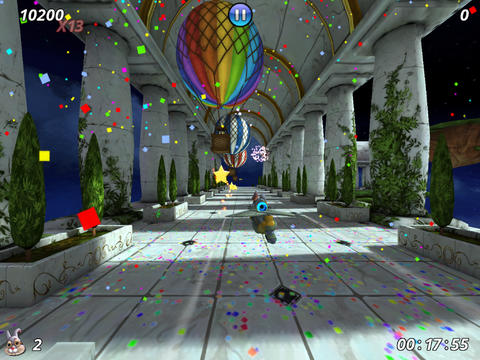 The game possesses two game modes: Tournament and Free Flight. In Tournament, the goal is to complete the course with the highest score you can muster. Points are gained primarily by collecting the coins spread across the course, with a score multiplier increasing for each coin collected. Though the coins are placed helpfully in lines, their placement is the source of difficulty, often positioned very close to hazards. Hitting one of these hazards, such as a wall, will result in a deduction of points and, if hit three times, a game over. However, the daring will be rewarded points for a “near miss” which involves flying as close to an object as possible without touching it. Points are also gained from special stars, which appear at certain places during a level. These stars are more difficult to collect than coins, as they move in various ways, but garner more points. At the end of each Tournament level, the player’s score is calculated, taking into account points earned, highest multiplier gained and best time. In order to unlock the next course, players must gain at least a Bronze medal.

In Free Flight mode, the goal is to collect presents. However, unlike Tournament mode, Free Flight does not have a linear course. Presents are scattered across a large map, positioned at various heights. Also unlike Tournament, players do not have a jetpack, instead they must rely only on glider wings. In order to stay flying, players must hit updrafts to gain height. Divebombing from heights also provides a large speed boost, aiding in the collection of moving presents. There is also no timer in Free Flight, allowing players to explore for as long as they desire. 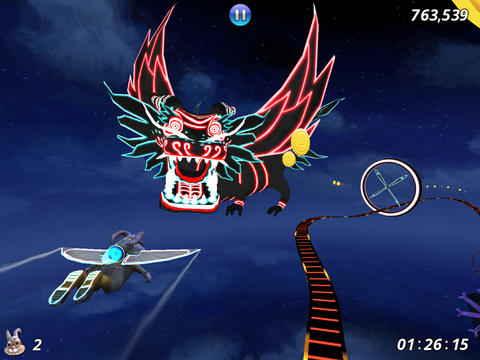 Visuals and Audio
Cloud Spin is beautiful. Powered by the Unreal Engine, the game features amazing 3D graphics and beautiful environments. Each level features a unique environment from start to finish, without reusing assets in the same course. The featured environments range from pleasant natural landscapes, to vibrant neon courses.

The soundtrack is…majestic. Featuring trumpets, piano, drums and cymbals, the music adds to the whimsical nature of the game. The audio creates an overall feeling of wonder, amplifying the entire experience. The only downside to the soundtrack would be a lack of variety in the music. This only becomes an issue if a player were to fail constantly, being forced to restart a level over and over. 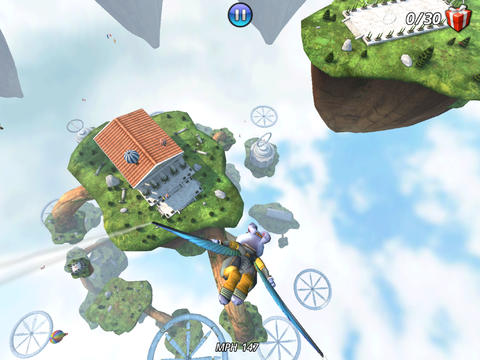 Overall
Cloud spin is a great game. The visuals are excellent and the soundtrack is triumphant. With simple gameplay, it’s easy to pick up and play (as seen in the video below). The requirements for unlocking new content increase as you play, through a fairly reasonable difficulty curve. In order to unlock the final level, players require a near perfect run through of each course. This can add an element of frustration, but the length of the levels mitigates this somewhat. Hopefully the game will add some more courses in the future and keep this rabbit flying.  All in all, Cloud Spin is fun, simple and beautiful.