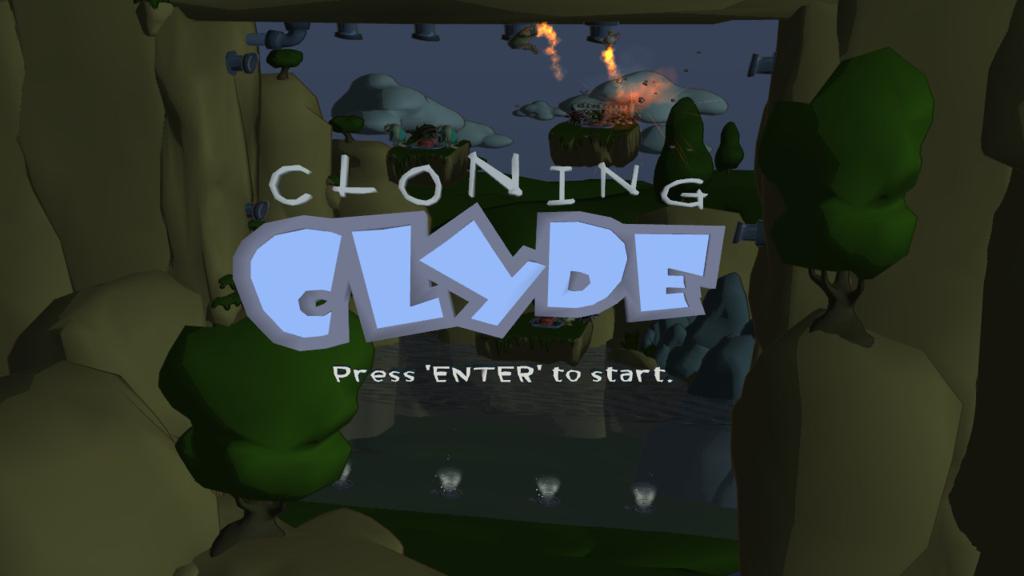 Cloning Clyde for the PC is a port of the Xbox Live Arcade title of the same name. As far as I can tell there is not much difference between the two platforms, aside from the controls. Players take control of Clyde and a small group of his clones as they traverse a series of levels, solve puzzles and fight baddies.

Cloning Clyde is a platformer stlye game where players must travel across levels which are usually organised in a fashion that makes them seem like they have multiple platforms. Each level consists of Clyde teleporting in at the beginning and then utilising objects and the environment around him in order to create a path to the end. Over the course of each level, players may create clones of Clyde, or the level may require it as part of a puzzle. While each clone does not have to reach an exit to the level, each rescued clone does add overall points to a players score. Clones have a separate exit to Clyde himself, who may or may not be one of his own generated clones, depending on the level and the players playstyle. These exits are ventilation duct like things, while Clyde’s are teleporters.

Apart from the cloning and and platforming, there is also genetic tinkering. With the assistance of certain devices, Clyde may alter his DNA with that of an object or another creature. This then gives him the power of that creature or object until the end of the level, or the player switches body with a clone. For example, if Clyde mixes his DNA with that of a chickens; he then gains the ability to fly. He also looks a bit like a chicken.

The game controls with either the Keyboard or the Xbox360 Controller, assuming you have one plugged into your PC. While the keyboard controls work, the gamepad feels like a much more natural fit. This is likely because the game was designed with the Controller in mind, as opposed to the keyboard. The keyboard controls aren’t bad or anything, they work and can be remapped for a more comfortable playing experience. But if you have an Xbox360 wired controller or wireless adapter for PC; I’d really recommend using the gamepad to play the game.

Some puzzles are pretty simple to work out, hit the switch watch the gate open, while others require a bit more creative planning. Some areas can only be accessed by using the right item or creature correctly. For example, riding a sheep to get some distance while jumping. Or kicking a chicken into some bombs.

Combat in this game is a pretty straightforward ordeal, with Clyde knowing a few basic moves which he does as the player hits the attack button. Hitting the attack button while performing a different movement action will cause Clyde to perform a different move. Like, while standing he will do a basic attack, whereas jumping will cause him to belly flop. I’ve found that belly flopping is slightly more effective than ground based combat in certain situations. 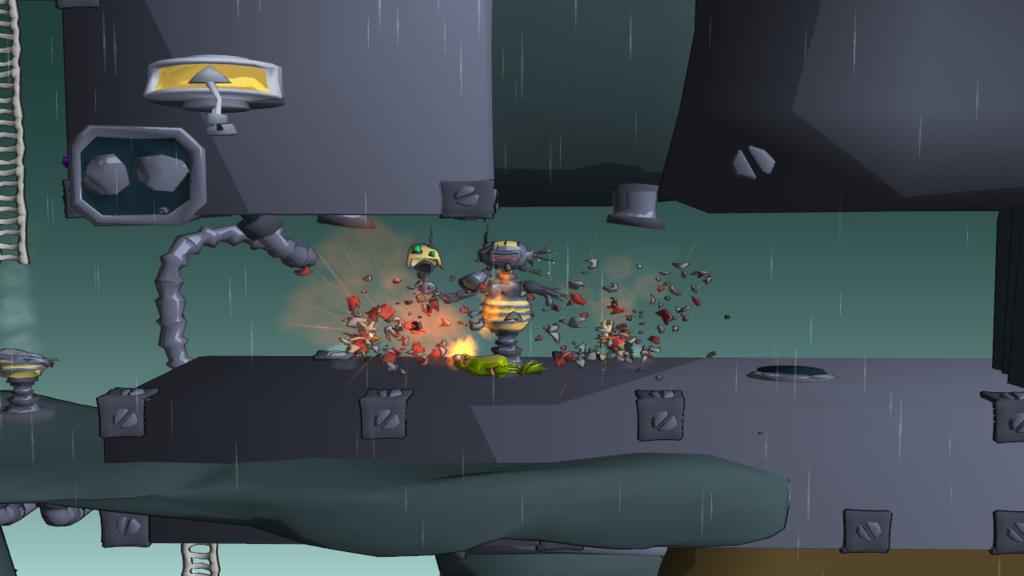 Aside from the platforming, cloning, puzzle solving and combat; players can collect various collectable across each level. The include things like robot doll things, strands of DNA and health crosses. Each item adds to your overall score, while the health crosses add to your health should you be running low on it. All these things get added up at the end of a level and the resulting score is given. Try to aim for better and better scores. After the scoring, Clyde is taken to a kind of lobby, or area that allows him to access each of the other levels.

The area lobby is where Clyde is able to travel between levels and access each one using a teleportation device. Each level is different to the last, though many share common elements. Most levels feature what appear to be an office like interior, arranged in such a way to be relevant in a platforming game. Meanwhile, there are other levels that take place in other locales, such as jungles. Though, these levels still seem to be set on the interior of some kind of building.

This game features sound as a gameplay component. That’s all that can really be said about it, really. The main menu has music, but that’s all. At least on my playthrough anyway. There’s a setting in the options to turn the music up, which I have it set to max and there is no audible music in any of the gameplay segments. Well maybe not *no* audible music, but certainly very little. It only seems to play whenever you accomplish something, and it isn’t like background music or anything, its just a slight amount of fanfare to let you know you’ve achieved something, like beating the level. Kind of like how Final Fantasy plays a tune whenever you level up, only it lacks the accompanying music afterwards. 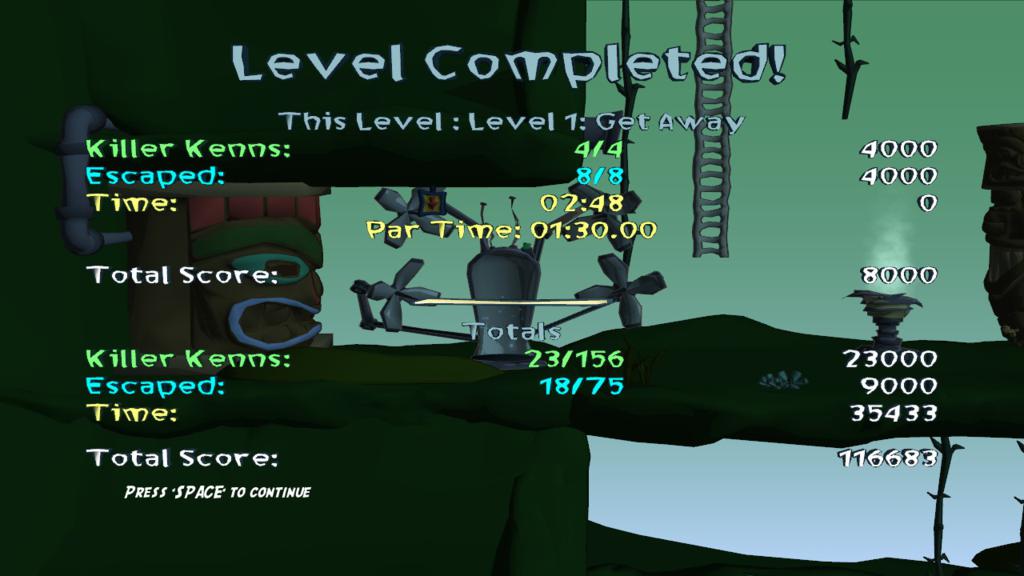 One of the few screens to feature music.

While the music was a letdown, the game does feature a somewhat diverse amount of sound effects. Each object, creature and item sound different to each other and Clyde does offer some soundbytes whenever he does a combat move. There only appears to be a small amount of these soundbytes though and after a few levels they do become slightly old.

Graphically the game isn’t as good as a game released in 2011 could be. Though, you have to remember that this is a port of an Xbox360 Arcade game from 2006 and as a result; shouldn’t have top tier graphics. Though, it doesn’t mean that they wouldn’t have been welcomed. The game looks almost exactly like it’s Xbox360 counterpart from years before.

This game’s graphical style is of the ‘try and look funny’ style, but it doesn’t quite work out. It instead looks more like something that has crept out of your nightmares while showing a little man-crack. And I mean that, Clyde is for the most part covered only in a hospital gown and the game takes no liberties with his backside whenever the game shows you the reverse of Clyde, which is surprisingly often. While the graphics are simple, I feel as though the game suffers because of the art-style. It just doesn’t convey the feeling the game is trying to push nor should it have ever been unleashed upon the public.

While creatures, Clydes, objects, enemies and powerups look as they should, they suffer from the same art-style as Clyde does… just not as bad. Powerups are probably the most distinctive thing in this game, as they are usually floating above the ground and look as though it should be something that you need to collect. It’s hard to explain because I’ve been playing platformers since the Sega Megadrive and collecty things just seem to stick out and I’ve never had to describe them before. The best way to do so would be to say that they share a similar style to the rest of the games art assets, but are distinctive enough to know that they must be interacted with in some manner.

The environments are usually in the interior of an office building, but vary to other types of locales, like the forest mentioned earlier; which is also inside the office complex. The environments are rendered around the same art-style as the rest of the game and as a result is very consistent with the overall theme that they were going for. While it might sound kind of silly to have a jungle inside an office space, it fits the games theme and while you’re playing, you don’t really notice or care all that much… so it works out quite well. 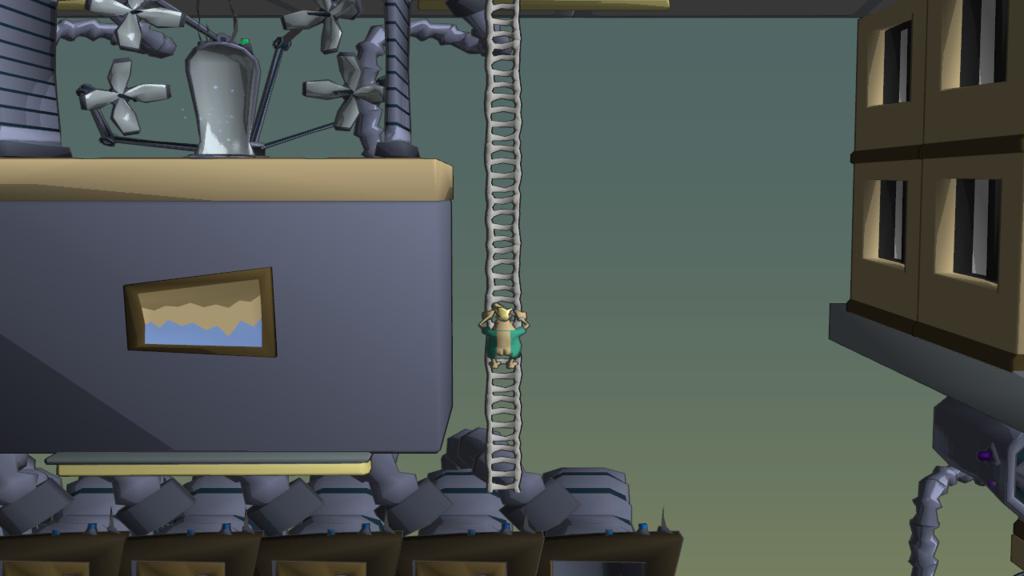 This should never have been allowed to be viewed by anyone. But there it is, and what a sight.

The game features a nonsensical story which players uncover as they traverse along the game. Well, it isn’t actually nonsensical and makes sense when you actually put it together. Basically, the dude you play as, Clyde, falls for a marketing ploy for easy money with a company called ‘Dupliclone Labs’.

Clyde awakens in one of the lab rooms with only his skills and various signs (literally) plastered around each level which give him tips and information on how and why he is there. Each sign was written by Clyde in order to help himself out. The only person that Clyde can rely on during this ordeal is himself and any clone of himself that he may procure. Also, any creature that may be willing, or unwilling, to splice it’s DNA with his own.

Clyde must make his way through the complex, rescue his clones and escape; as well as find out who he is and what’s going on along the way.

Cloning Clyde is an interesting platformer with a decent difficulty curve, a sense of humour that will either grow on you – or grate on your very soul, simple, but effective graphics, a story that isn’t just dumped on you all at once and most importantly, it’s incredibly fun! The fun factor increases with the difficulty of the puzzles and the nonsensical scenarios that you are sometimes thrust in upon. Though, often, you’ll create your own fun scenarios, running backwards and forwards trying to get the bomb dudes off you while you belly-flop some robots.

Also, as an aside, the frog version of Clyde is my personal favorite.

In a comment below, tell us what you believe would be the best combination of creature that Clyde could splice himself with. The best comment will receive a PC key for the Steam release of the title. A winner will be announced in a few days.