I’m generally not a fan of clingy things. Clingy girlfriends, clingy pets, clingy kids, when lint clings itself to your clothes…you get the idea. I am however a fan of Cling Thing. It’s a beautiful game with an ugly character, swinging it’s way through challenging puzzles. Gameplay feels fresh, it’s nicely polished and has plenty of levels and content to offer. It may not resonate with all types of gamers but it’s a solid title regardless. 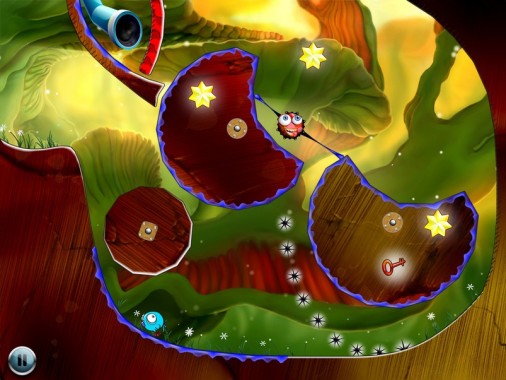 Cling Thing has players controlling a…Cling Thing (whatever that is) throughout 96 physics-based puzzling levels. By tapping on the screen the Cling Thing will cling to a particular surface. Using this as your only means of transportation, players must navigate throughout levels trying to collect stars to unlock more stages. You can cling to multiple surfaces at once to get some pretty fun Spider-Man style swinging going on as well. At first some may be frustrated as your finger may cover the spot you’re clinging too, but as soon as you realize you can move your finger out of the way so everything is sweet. After learning the basics, the game picks up rather quickly. Level design is clever as well as being highly rewarding. Difficulty is also well balanced, as new elements are slowly eased into the game such as portals, cannons and enemies. More or less everything works, but on occasion things can get awkward with positioning your fingers. For example some stages ask you to use three fingers to tap on the screen which can seem virtually impossible to do so comfortably. Thankfully, Cling Thing is very forgiving as levels can be completed without collecting any stars at all, and entire worlds/stages can be skipped from the menu. Gameplay can get a little repetitive however as there isn’t anything else to mix up the gameplay, but I’m sure those picking it up will know exactly what to expect. 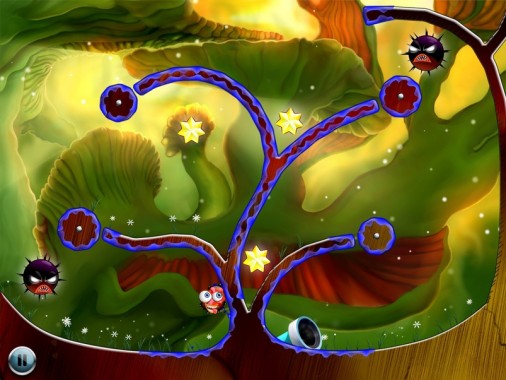 As previously mentioned, Cling Thing is a beautiful game with ugly characters. Graphics are smooth, colourful and fun, but the player will always control one of the most ugliest protagonists ever seen in video games. Don’t get me wrong – the design is practical and suits the goal of the game. But all the playable characters are odd faces that cling to things with a retractable tentacles, with uneven eyeballs and have their tounges hanging out. Oh yeah and they’re all covered in some weird tire-like thingy that keeps them rolling. It’s not going to effect the gameplay, but it’s a little off-putting. Aside from that everything else looks rather nice, particularly the backgrounds. Audio is calm and relaxing, and the sound effect that is heard upon making a successful ‘cling’ gives a sense of success which is rewarding. So while the Cling Things aren’t the nicest to look at, the game in general looks and sounds rather well. 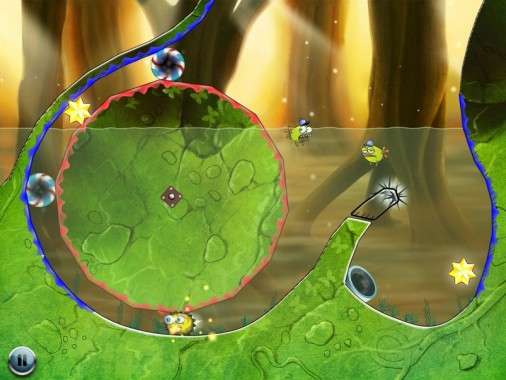 If you pick up Cling Thing, you’re most likely going to get exactly what you’d expect. It’s nothing but physics-based puzzles with literally nothing else to offer. However it’s bursting with creativity, has fantastic level design and has plenty of polish. While the game tries to avoid being repetitive it still does a little. There are a few other hiccups here and there, but the majority of which can be overlooked. If you cling to this sort of thing than Cling Thing is the game for you!