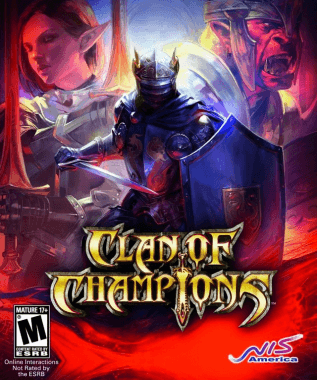 Overview
Genre is becoming harder to define as most games bring forth elements from multiple genres to increase the game’s integrity. Clan of Champions is one of these mutts as it defines itself within the action category but presents a multitude of role playing and strategic elements. Does Clan of Champions collectively work with these elements combined? Let’s find out.

Story
Presentation of a storyline is very important as it will grasp the player’s attention and allow the player to immerse into the created world. And this is where Clan of Champions fails to deliver. As you begin the missions, a mission debriefing is given to the side of the mission select screen. However, the debriefing can be missed or skipped entirely with the player not needing to know the background information of the mission. I admit that I gave up reading the mission objectives and selected the next mission without knowing what to expect. 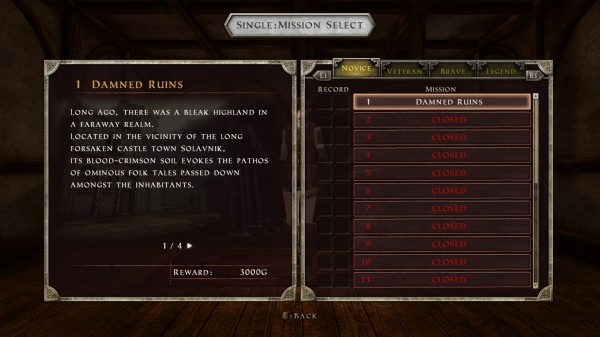 During the missions the story is lost to concentrating on a single objective of destroying targets. If you destroy all targets in the area, you are going to continue to the next mission. There is an off chance that there will be a “VIP” battle where you need to eliminate a prime target (boss) or there is a person that needs to be protected throughout the course of the fight. But don’t expect too much out of the story unless you read the debriefing beforehand.

Gameplay
At the beginning you experience three separate fighting styles: sword & shield, duel wield, and close combat. All three separate styles pose different advantages and disadvantages. For instance, the sword & shield fighting style offers the most defense of the three styles. Deciding when to block and strike will prove effective against multiple foes. Duel wielding weapons will give the advantage of jumping into the fray with more damage potential. However, the duel wielder is more vulnerable with longer recharging special attacks and no shield to parry attacks. Finally, the close combat style offers the brawler with quick effective strikes that can recharge faster than the previous styles. Using both feet and fists may not deliver a ton of damage but can break down armor fairly quickly with subsequent strikes. 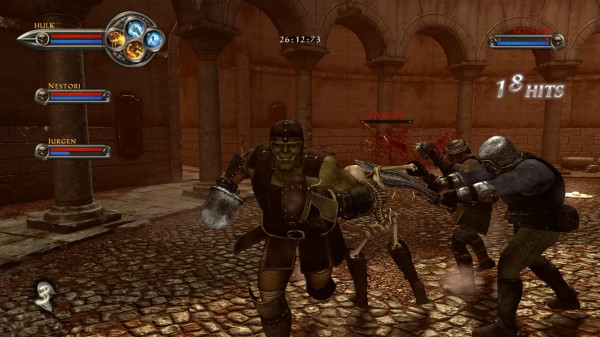 One of the most interesting characteristics of the gameplay is that you may pick up anything that is dropped from yourself, teammates, or opponents during missions. If your opponent’s helmet is knocked off – and it just so happens to be better than yours, you may pick it up and trade it with your own equipment instantly. The again you can also equip the helmet to your hand and bash foes in the face with it. Weapons can be exchanged as well but altering the weapon will also change the battle style in combat. If you begin with close combat fighting style and pick up a sword, you will automatically switch over to duel wield. 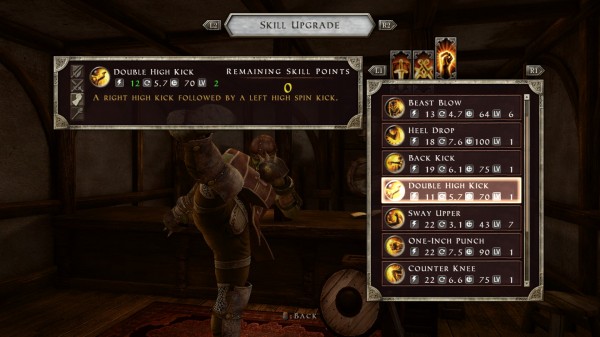 Additional to weapons and battle styles, special moves can be learned by building experience in using the individual styles. For instance, a close combat brawler could learn a special move called “Double High Kick” which causes the player to target an opponent’s head with two subsequent kicks. In effort to make the moves do more damage and to gain special effects, they must be used frequently during the missions. Leveling up in a stance will grant you with points to spend on special moves and even magic.

Magic can be found upon the completion of missions in the form of ancient scrolls named grimoires. These ancient scrolls hold powers that can burn, heal, and even immobilize targets. Increasing the magic’s effectiveness works the same way as building up special moves. Such effects could include increased damage or even area of effect. After using a spell long enough in missions, you can attain passive skills specifically for that spell. An example of this would be to attain a passive skills for Fireball that reduces the cost of the spell by 40 magic points. Other passives can reduce the time to cast or recharge the spell. 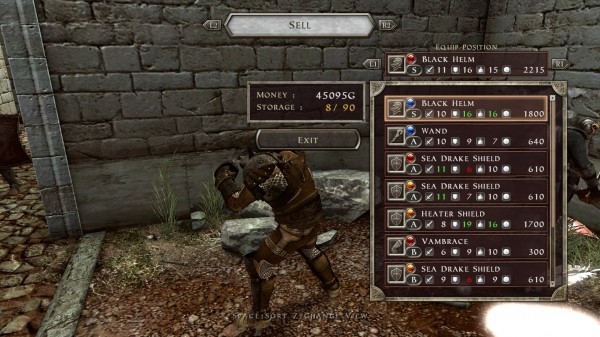 One of the downsides of finding all the armor and weapons on the battlefield is that you cannot take the spoils for free. All items found can be purchased at the end of each mission or discarded. Even when your player finds unique scrolls – grimoires – you will have to purchase them back at the shop. This system seems a little funny due to the fact you can pick up weapons mid-battle and basically claiming them as your own. I agree that items should be given a money value but charging a player to buy equipment that they slaughtered others for is a little bit more than ridiculous. If anything the inventory allowed of a player should be decreased, and player should be able to see any item they decide to pick up from battle to the shopkeeper. In addition, the shopkeeper could have premium items for sale that would take a moderate amount of coin to purchase – giving a prestige outlook. More role playing elements could be initiated especially with the upgrading system to include specific weapon bonuses causing the player to decide whether or not to sell items for cash or material for upgrading.

Audio/Visuals
Character customization is extremely important when it comes to creating a character. Being supplied with ample amount of choices, a player can really define a role for his character. Clan of Champions allows players to achieve this gratification by defining a character’s race, attributes, and appearance. The developers went as far as creating a range of hair color, face types, and even voices to encompass the detailed customization. 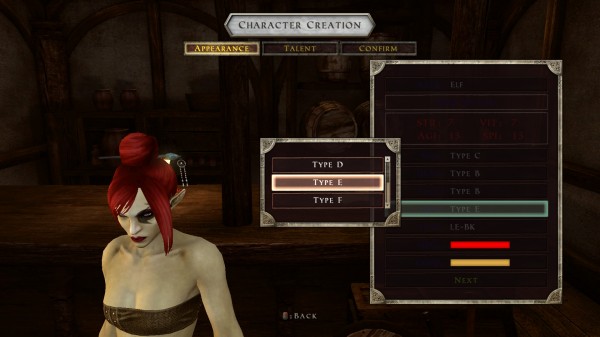 Cinematic entrances provide no action with only visible words accompanied by a working musical score. To invigorate a player to be excited about the game, more action or animations could be included in the introduction alongside the provided music. While the words in the opening cinematic explain the backstory, visual aids along with special effects in visual transitions could intrigue the player more.

An important aspect that the developers did not miss was in making the battles come alive with both visual and audio effects. It is extremely important to render animations at specific moments with palatable sounds to capture the true essence of battle – sword clashing on a shield. If these renderings did not occur at the same time, our playing experience would be damaged by inconsistencies. Part of the fun in any game is investigating how sounds and actions reflect one another.

Overall
Clan of Champions shows promise in some key areas. The game provides role playing elements such as upgrading weapons and armor. Such elements make the player want to search for material to upgrade items to have the most prestige weapon or armor in the game. Another aspect is that characters can openly switch combat roles in a mission by simply picking up a new weapon. A noteworthy implementation is the use of magic and that it can be used alongside each of the three combat roles without penalty. And finally the leveling system allows players to identify what skills and stances to upgrade during their progress.

However, there are a few aspects that could be built upon or altered for overall enjoyment. The story seems to fall back behind the scenes and never truly surface with any importance to the title. This can be noticed by selecting a new mission and begin playing without even reading about the mission description. A lack of variety in character models may propose a feeling of repetition in missions. Grinding against the same enemy for a few hours will definitely deter you from having a good experience. Buying and selling equipment could be changed to let players have more of a role playing experience via bartering/haggling with the shopkeeper.

Overall, Clan of Champions provides a mediocre experience that can become quite repetitive after a several missions. The title may become increasingly more challenging as the difficulty is raised, but the drive to complete missions on all difficulties is muffled by undeveloped game mechanics that have much potential. Clan of Champions is a prime example of a game that could benefit from an open beta to gather public influences before being released.