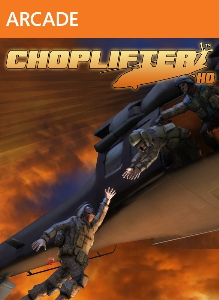 Overview
Originally designed for Apple II computers, Choplifter was then ported to game systems as well as the arcade. Not many games can share this transition from computer to console because most games at this time were initially released in arcades or for game systems. Even through the years Choplifter has made appearances on upgraded portables/consoles like Choplifter II (Gameboy) and Choplifter III (Super Nintendo). And now the classic has been re-mastered in high definition for Xbox Live Arcade, Playstation Network, and personal computers.

Gameplay
Choplifter HD provides very similar controls that resembles the classic version. Once a mission begins, players must lift their helicopter off the ground. The left analog stick controls the movement of the helicopter providing possibilities of forward, backward, up, and down. Additionally, players can choose to turn the air unit in one of three positions: right, left, or facing screen. The change in direction occurs by pressing the left and right bumpers on the Xbox 360 controller. While this is not typically necessary to complete the beginning missions, direction change becomes essential to destroy anti-turrets and enemy soldiers in later levels. 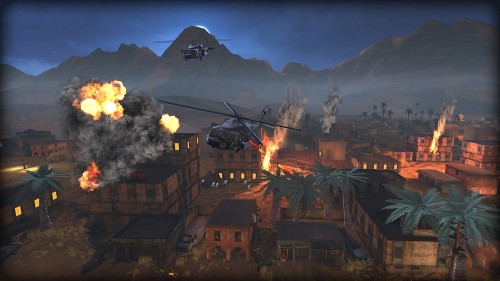 Killing enemies would not be possible without some sort of arsenal of weaponry. A rail-gun is attached to the helicopter and has the ability to shoot at varying angles. Holding down on the right trigger unleashes a barrage of bullets, yet a direction is needed in order for the damage to become effective. Utilizing the right analog allows for directional shooting of the rail-gun. Upon shooting the rail-gun, players can see that this weapon has a cooldown factor with unlimited supply of bullets. If the trigger is constantly being pressed, the weapon will immediately stop for being overheated. The weapon starts a cooldown and cannot be fired at this time.

Rockets can also be fired – if available – by pressing the left trigger. Once again using the right analog becomes essential in choosing a target. Unlike the versatile aiming of the rail-gun, rockets can only be accurately fired in front of the helicopter. Aiming behind the helicopter with rockets will result in the player shooting the ground. However, I have experienced a few rarities actually arcing towards the ground just skinning to make a horizontal shot behind the helicopter. 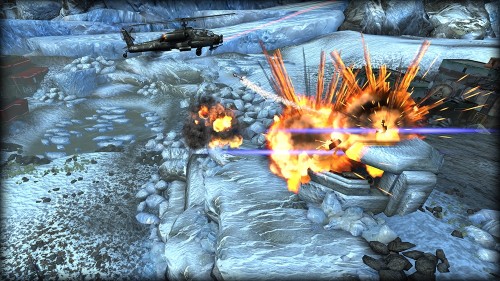 Another important ability for the helicopter is the speed boost. Using the boost will drain your gas supply faster but in turn move you faster across the map. Some missions have gas tanks spaced out on the map, so then you do not have to return to the start to refill your tank. However, returning to start will regenerate your helicopter’s health as well as fuel and rockets.

Missions differentiate by the objectives that are given at the start. In the rescue missions, you will encounter several refugees/hostages that are injured. People that are injured will have a bar above their position that changes from green to yellow to red. To ensure survival of all of the refugees, you must find out which people have longer chance of survival. This may take several attempts of trial and error, but each injured person has a different length of survivability. A wise decision would be to pick up the furthest ones first and work back towards the base. Other missions will require you to destroy anti-air turrets or to provide one way transport for refugees.

Performance on each mission is ranked upon completion ranged from 0 to 5 stars. The first aspect the stats add up is the amount of enemies/weapons that was destroyed. More heavily armed units are worth more points like tanks or anti-air turrets. After the kills are added up, a time bonus is available. If you complete the mission very quickly, this could be the source of most of your stars. Positive points are attributed to hostage/refugees that are saved, but double points are taken away for innocent deaths. This means you should not blow up your own men nor ram them with the helicopter. With this “accidental” homicide on the brain, I implore you to check out the achievement listing to find an interesting objective. By earning stars for completing missions, new and improved helicopters can be used for previous missions to increase your overall star count.

One of the major drawbacks about the gameplay is that you feel like you are playing the same mission over. I experienced this repetitive action by the main objective of picking up hostages. An arduous task that becomes even more strenuous upon dying in a volley of anti-air attacks. While unlockable helicopters increases the playability, the replay value decreases because of the repetitive nature of common objectives. 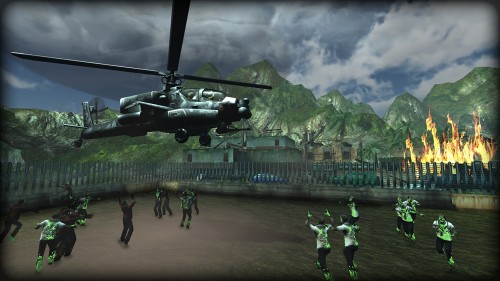 On a positive note, Choplifter HD includes fantasy based events that can spark interest to the player. A zombie epidemic occurs in a specific mission, and your goal is to defend certain rally points and transfer survivors to the hospital. Shooting down 1,000 zombies will unlock quite an unique achievements. Try the same with chickens and goats.

Audio/Visual
The visuals have come a long way since the original release of Choplifter on the Apple II computer. Updated graphics offers a fresh feel to the classic and yields an entirely different game. Before you would be landing your helicopter to pick up white stick people. Now the hostages are detailed resembling a modern approach in high definition.

While gameplay might seem repetitive, the landscapes are creatively different for each level. I remember specifically in a refugee escape mission I was steering the Raven model helicopter through a cave dwelling. I was tested by the environment to make quick steering adjustments not only to avoid collisions with the cave walls but also incoming rockets from enemy pursuits.

Explosions need to hold an impact on the player, and each explosion on a helicopter makes me cringe. A helicopter can only take so much damage, so this feeling creates intense battle zones. I am usually willing to take on a constant barrage of bullets knowing well that I escape the target. Explosions from anti-air guns slow down the helicopter nearly to a complete stall. The visual effects help make this moment even more detrimental. 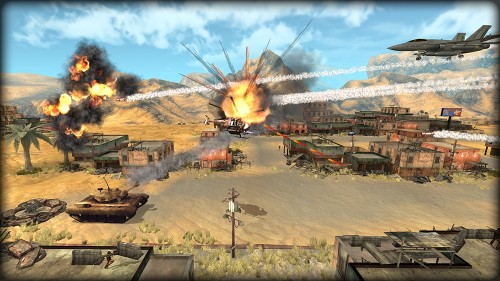 Before every mission starts, there is a short dialogue between the pilot and gunner. I can safely assume that this dialogue was meant to work as comical relief. I certainly couldn’t help myself to say, “Get to the Choppa!” This phrase can be heard during a sabotage mission where the engineer continually jokes after setting explosives.

Overall
Choplifter HD provides a wonderfully remastered version of the Apple II classic. While the game mechanics have remained the same, unlockables like helicopter models have been added to increase re-playability. With hidden objectives and mission rankings, the game allows a player to try to attain a high score on global leaderboards.

Unlocking new helicopters can be fun, but repetitive lengthy missions reduce the title’s overall value. Even as the objectives change, the main component that shifts between missions is enemy type and obstacles. Eventually, I became bored enough to kill off all of the refugees. Not entirely a bad decision by looking at the achievements.

For those that appreciate the classic Choplifter, you should find that this is a visually pleasing remake of the classic. Repetitive missions was my major drawback even though the scenery and enemies are different between levels. If you are curious about this title, I urge gamers to play the demo first before spending 1200 Microsoft points.