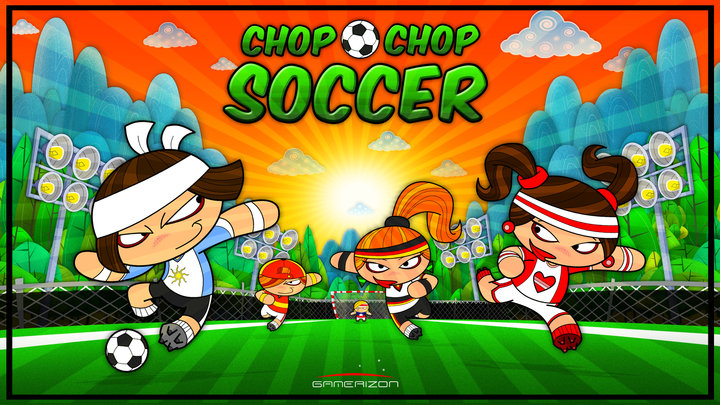 An addition to the Chop Chop series from Gamerizon, Chop Chop Soccer doesn’t have a story of such, but is based solely around the gameplay. You play as the three soccer players and the goal is to score as many goals as possible! 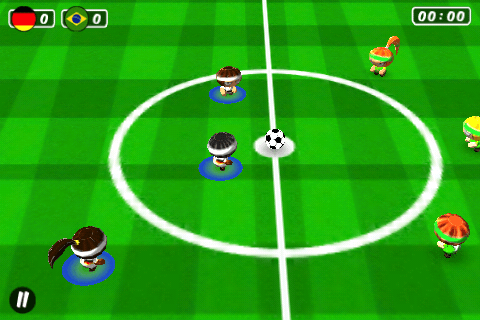 After playing for five minutes you begin to see the time put into Chop Chop Soccer by Gamerizon. It utilizes the iPhone and iPod Touch capabilities excellently and the three dimensional graphics are given an almost cartoon-like effect where the colors really seem to pop out of the screen. The music is also very well composed and never gets annoying or boring to listen to. Gamerizon also looked into the smaller details in the sound design such as the sound of the soccer ball hitting the crossbar or post. This adds a lot to the overall playability of the game. You are also given the option to play the game as a side scroller or from above. This can massively vary the experience. The game also has many differently designed levels, which add a slight twist and are definitely pleasing to the eye. 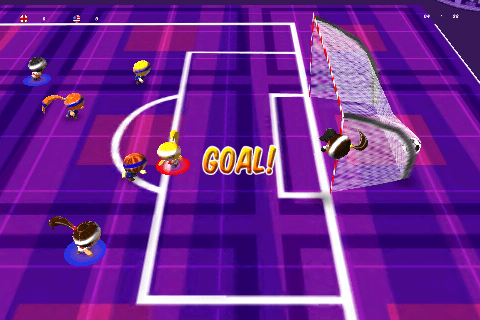 The gameplay itself is very simple. All you need to do is score goals and win the soccer match. This is simple in itself, but when teamed with the tough competition of the AI team, it is harder than it seems. Even when the opposing team is set to Easy difficulty, you have a hard time defeating them. This is not because of the AI programming itself, but because of the awkwardness of the controls. The controls are the only downfall of this game, and are a steady deterrent. Perhaps if there was an on-screen virtual thumbstick and a virtual keypad, the controls would be no problem at all and the game could flourish to show it’s full potential. There is also three separate modes; Tutorial, Single Match and Tournament. Obviously Tutorial does exactly what it says and get’s you acquainted with the games controls. In Single Match and Tournament you have the option to change your team, which adds or takes away different statistics, change the opposing team, change the opposing difficulty and also the length of the match.

Single Match also is exactly what it states; a single match in which the aim is to score as many goals as possible, whilst disallowing the enemy team to score. Tournament needs a little more explanation however. Tournament mode is a knock-out style game type in which the aim is to survive elimination and win every single game you play. Just like the World Cup, if you lose, you do not continue. There is plenty of different teams to pick, each representing a country of the world and adding these has increases the re-playability ten fold. The Tournament mode itself is a reason to buy Chop Chop Soccer as it is the most rewarding part of the game.

Chop Chop Soccer is a brilliant concept and if it was further developed could show massive potential in the iPhone and iPod Touch gaming market. However, the controls are a major restricting factor and massively reduce the games overall score. If the controls were fixed in a patch, the game would receive a much higher score, but as it stands, it’s score will be lower than the potential score that the game could of received. Overall I give Chop Chop Soccer a FAIR rating of 6.5 out of 10 capsules.