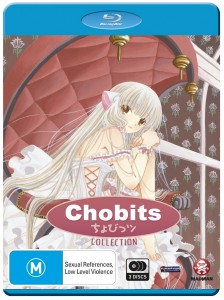 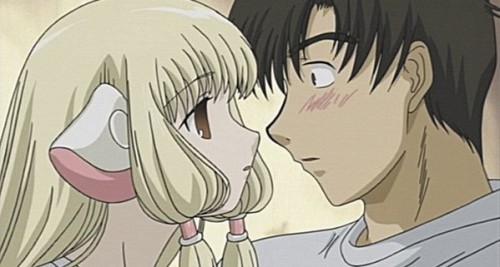 Based upon the popular CLAMP manga, Chobits was originally broadcast in 2001, winning over the hearts of many anime fans. The mix of the romantic comedy and science fiction genres blended naturally within the series. Set within the same universe as the anime Angelic Layer, Chobits explores and branches off many of the same themes of humans and their relationships with electronic devices simulating humans. Chobits Collection takes all 24 episodes and remasters them in HD for Blu Ray, as well as throwing in a bunch of special features. If your already a fan of the series this is already a must-buy, and is a delight to watch, although it may not suit everybody’s tastes. 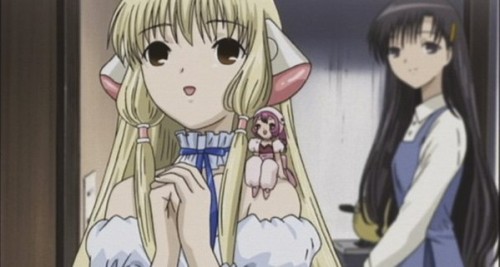 Chobits Collection keeps in theme of the digital era throughout, with a logo shaped like a button that is constantly being clicked and menu’s font looking like it was ripped straight out of an Atari console, and it works beautifully. The 180i HD remaster looks wonderful and the series has never looked better, and with the Dolby TrueHD soundtrack, the series has never sounded better either. Admitted though, its not by much Special features include a wide range or previews, trailers and textless openings and closings as usually expected, with a few chats with creators involved which should satisfy many fans. The only complaint I can think of is the inclusion of trailers before being able to access the opening menu. While Chobits Collection isn’t the first blu ray or DVD to do this, its quite annoying and could’ve easily been put under special features. Regardless, presentation is wonderful, and the special features are satisfying. 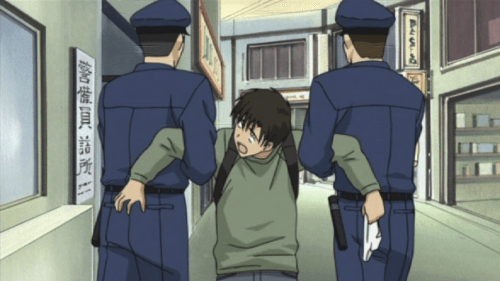 Chobits follows 19 year old Hideki Motosuwa, an american exchange student in Japan living in an alternate present day. In this world we have computers known as Persocoms that can look like toy figures, animals, and yep you guessed it-humans! Hideki one day stumbles upon a rather ‘cute’ one which can only say the word ‘Chi’, so he decides to name her that. Yeah, much like you would a Pokemon or like that character ‘Nyu’ from Elfen Lied. Chi of coarse is custom built, and just happens to have recently crashed and is without an Operating System. For some reason she has a unique learning program installed and must learn everything from scratch like a baby again. Meanwhile Hideki must solve the mystery behind what happened to her, try and do well in a foreign school, pay the rent and his bills while trying not to fall in love with a computer. If I don’t seem so over enthusiastic about explaining the basis of the plot, it’s because it’s a very common theme in both anime and science fiction. But don’t get me wrong, the theme is explored nicely, with an interesting story, loveable characters and decent humour that it can easily keep you entertained episode after episode, and while it may seem at first to be quite simple and childish, it’s adult themes and surprisingly deep complexity and attention to detail will intrigue you through to the final episode. 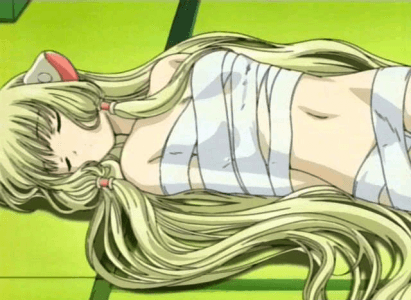 However it’s not the plot which is the main focus in the story of Chobits, but rather character development. The relationship between the undeniably cute and clueless Chi and her owner Hideki grows in strength with every episode through the use of humour; the majority of which is situational comedy, often based on Hideki not being able to talk to girls and Chi trying to understand the ways society works. The cast while strong, I feel the weakest character in the series to be the protagonist Hideki in which that drives the story, although Im sure many will disagree. Hideki is virgin, and Im sure his personality is meant to appeal to the female side of the audience as much of the humour of the show is based on how he is shy and embarrassed around girls which he finds attractive. Im sure he’s meant to be seen as cute, but I just see him as such a scardy-cat it frustrates me. While there were moments that made me chuckle, I found some of the gags to be a little bit overdone and occasionally silly because of Hideki’s overreacting, making me feel slightly less able to relate to the character. The humour based around Chi trying to understand the ways of living in society I found a lot more humorous, as well as interesting to see how she perceives particular simple aspects of life. Another main focus is the ‘will they or won’t they’ relationship Chi shares with Hideki, and it pushes the story forward and keeps things engaging. In scenes where he is outside the apartment investigating the mysterious past of Chi, suspense and strong plot points drives the story and creates quite a thrill whilst also going hand in hand with the idea of exploring the world of Persocoms, which actually goes quite surprisingly deep. This is where characters such as Hiromu and his persocom Sumomo, as well Minoru and his persocom Yuzuki come into play, as they always give insight to the world of persocoms making their screentime always full of intrigue as being among the highlights of each episode. 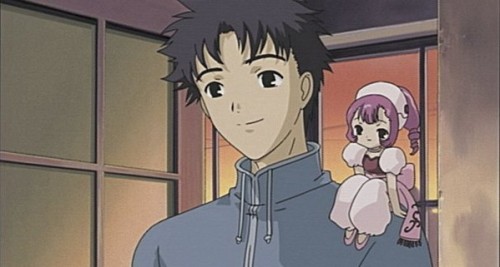 Chobits collection is an exciting story told in an interesting setting. It’s warm characters and atmosphere are inviting, and the character development is engaging. The slight hints of romance will have the audience wanting more, and the comedy while sometimes hit and miss, never fails at still finding a way to charm itself into the overall atmosphere of the series. Furthermore, the themes of humanity vs machine come into play at times and can be quite entertaining. However, the series isn’t flawless. At times it feels that Chobits doesn’t really know the target audience it’s trying to appeal to. One episode will be light hearted comedy and socialising that could be suitable for children, while the next episode may be quite mature revolving around humour based on pornography or sexual innuendoes. One episode may be adventurous and thrilling which would appeal to young males, the next may be about trying to find ones true love and soul mate which may seem a tad girly.  It can be a little confusing at times. Furthermore some of the sexual innuendoes can be overwhelming at times, and surrounding a clueless, vulnerable, attractive and young female lead it can feel a little perverted and creepy on occasion, especially through the eyes of a western audience. Also in later episodes when Chi becomes more and more self aware of her identity and past, the series takes an unexpected turn which in some ways changes the feel of the series for better or worse. With all this in mind however, Chobits Collection is still very entertaining, and really is one of those anime’s that grow on you the more you watch it. What begins as what seems to be a series of unrelated light-hearted episodes to chuckle along to quickly turns into a roller coaster of emotions and thrills, while mixing to two most important aspects of an anime plot: a community-based setting that allows character development to expand and engage, and a captivating adventure filled with thrills and plot twists. 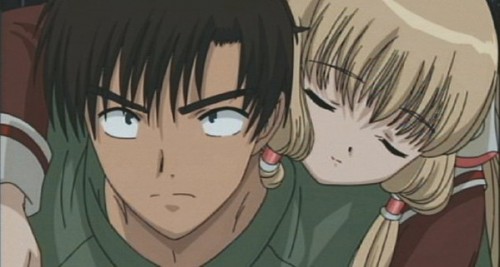 Chobits Collection now displays the Chobits series in 180i High Definition and it’s sound in Dolby TrueHD and while it does improve the original quality, it isn’t all that noticeable. Audio also contains both English and Japanese dubs and English subtitles. Both character and background designs looks great and are all of the same standard. Nothing seems overdone or too exaggerated, as well as containing smooth and fluent animation. The small cast of characters really helps each person stand out and become noticeable, which places a nice focus on each character. The soundtrack works well for the most part, containing a slight retro feel to it. For all those interested, the opening and closing themes are quite catchy, and the opening theme ‘Let me be with You’ by Round Table, featuring Nino is pretty damn good and must be mentioned. You’ll find yourself singing along after just a couple of episodes! 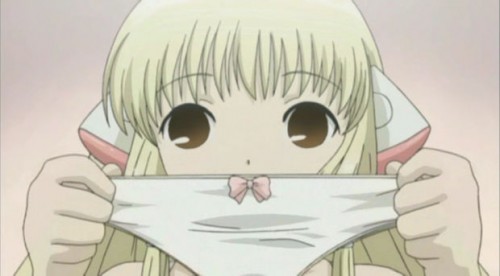 Chobits Collection is obviously a must have for any fans of the series, but it’s easy to recommend to any fan of anime. While appearing at first to be a simple romantic comedy set in a sci fi universe, the depth of Chobits is delightful, exploring a vast world of how these humanoid computers function and experience life, with loveable characters development strengthening with each episode. While many of the more humorous episodes do seem more like ‘fillers’ they do help the audience become more emotionally attached to the characters, while the episodes that are more plot-driven are very thrilling and filled with many twists and turns keeping you on edge. However the constant switching between mature themes to exaggerated almost childish comedy can seem a bit mixed at times and out of place, and may take some getting used to as it does seem unexpected. Regardless, Chobits Collection is still very enjoyable and is easy to recommend to anime fans looking for an anime based on long-term character development, suspense and discovery, rather than the type of anime that’ll have the world saved in one episode from an evil space monster by a flying, laser beam shooting martial artist.

I give Chobits Collection