Flying through the jungle collecting bananas and gems while avoiding spiders and other dangers? Sounds like an iOS app. Especially with the super cute Chimp that is at your control who does a little dance every time you finish a level successfully and is rocking an adorable mohawk. Is Chimpact your standard aim and shoot platformer or does it establish itself with something different?

The gameplay for Chimpact is quite simple; you send your chimp flying from vines that are at intervals through the map by tapping the vine and dragging it back. An arrow will show up on the screen, showing you which way your chimp is being sent, as well as the strength you’re sending him flying with. In some cases you’ll get a hint about which direction to go in, but if you need a hint then you probably need to play faster. 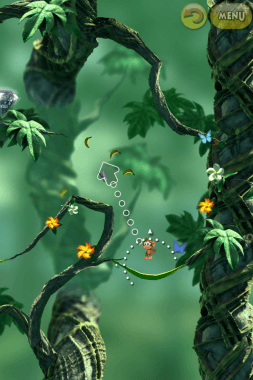 Initially the levels are very straightforward and not difficult to make your way through and the gems are in fairly easy to find places, but as they go on it will get more difficult and getting all the gems might take you doing a level more than once because you’ll find yourself rocketing past one without the ability to go back and aim for it. A lot of them are hidden in bushes, which isn’t that much of a hassle, but some of the trickier ones might cause some raging out. There are also some parts where, unless you get it just right, you’ll keep hitting branches and rolling back onto the same vine, which is also cause for some raging. 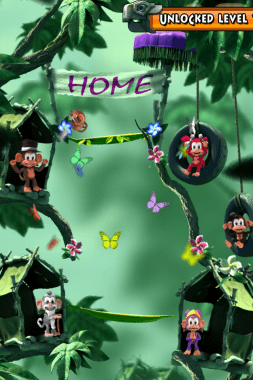 While the idea behind it is quite simple, there’s no doubt you’ll have plenty to do because not only is there a Gem Quest mode where you hunt down gems and make your way through levels. There is also a Totem Trail mode, which has a range of challenges for you to complete, all of them being time sensitive. The challenges range from having to reach a set number of things in a limited time, to racing against the clock to finish a level, to limiting the amount of vines you use. There are five challenges in each totem, but you don’t have to finish all five to get to the next totem so don’t worry, if you aren’t good at a certain type of challenge then you won’t be stuck with it. As well as having five distinct challenges there are also a few different types within those five that keeps it fresh. Like the Totem Trail, you don’t have to collect all the Gems on each level to move on, you just need a minimum amount to unlock levels. 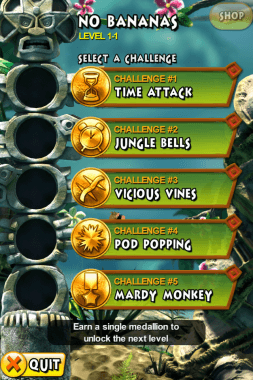 The great thing about Chimpact is that it has a really good learning curve that isn’t too steep. While it obviously doesn’t have very difficult gameplay there are also little tactics and game knowledge that you pick up along the way, which gets doled out to you in a steady and good way.

Overall the gameplay is fun and fast-paced, and it doesn’t require too much replaying of levels to continue on.

The graphics are cute and cartoony with a high level of detail and are quite nice to look at. Everything moves smoothly and I didn’t encounter any issues or glitches with it while playing. It’s just a good looking app and one that will make you grin like a kid at the cuteness of it. 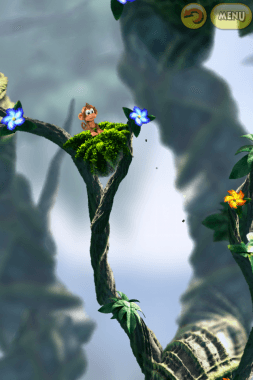 Unsurprisingly the soundtrack is full of jungle noises. While the menu might be a bit full on with the range and loudness of sounds, the game itself is a bit more toned down and only has the random animal sounds that you’d expect. Plus some random jungle cat sounds which sort of worry me about the chimp’s safety, but it seems to do okay. 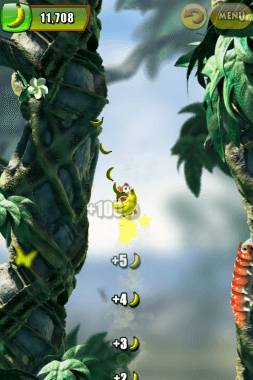 Chimpact is definitely an app to look at getting if you like these sorts of level platformers. It gives a bit of a challenge, while still maintaining aspects that will make it easier for those who aren’t experienced, like allowing you to go through without gathering all the achievements you can. It does get quite addictive and you might find yourself a few hours later still playing and flying that little chimp through the jungle branches.

Chimpact is definitely a must buy for those who like a challenge with a steady and fair learning curve, with the added bonus of a super cute main character.