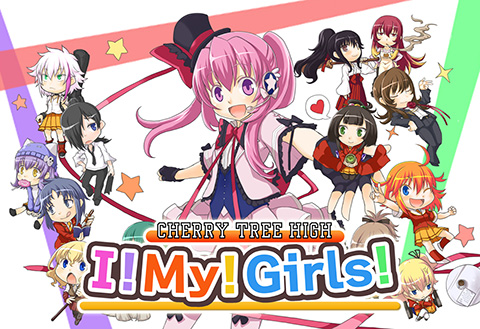 Overview
There is somewhat of a localisation renaissance happening on the PC right now with quirky Japanese games and visual novels cropping up out of nowhere, all in English for our benefit. It’s great to see the visual novel market, no matter how small, start to open up in Western territories thanks to digital platforms such as Steam. 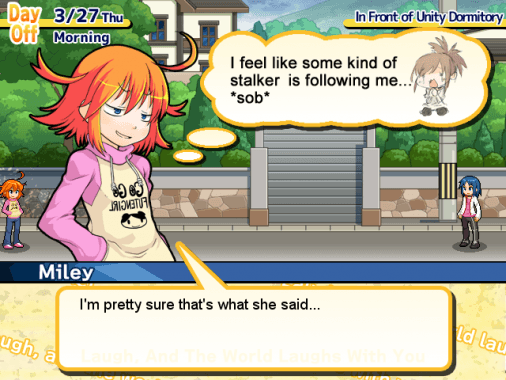 Story
Although I have never played the original Cherry Tree High, the story is fairly straight forward from the get-go. We’re first introduced to two minor characters, the student council president Chitose and teacher Utena who are deliberating the continued running of the school’s Comedy Club. The members of this tenuous club are the stars of the story; the boisterous Mairi, the prim and proper Hoemi, punk rocker Haru, a girl with glasses who is so hardly mentioned I forgot her name and a fairly unremarkable guy by the name of Yoshiki.

Surprisingly, the club is more or less up and running right away. It seems the bulk of the story veers towards a different direction rather than character introductions with hardly any setup at the start. Once Mairi has her Comedy Club up and running the plot moves towards her dream of going pro and her search for a comedy partner in order to form a dynamite duo and make the world laugh. 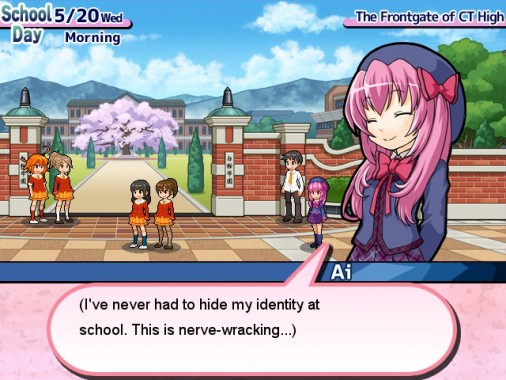 Soon enough, a spanner gets thrown in the works with the arrival of super famous idol Ai Towano who attends Cherry Tree High incognito in pursuit of her own dream to attend the famous Comedy Club. I found most of the humour came from this little trooper who gets lost easily, looks like an angel and has to pretend she can’t sing to keep up the deception. Ai’s place in the story is almost centrefold right next to Mairi but even so her background life isn’t explored as much as I would have hoped let alone the lives of the side characters.

The plot picks up towards the end and it’s Hoemi who surprisingly becomes the most interesting part of the game as her cheerful attitude masks the uncertainty towards her best friend. Sadly, it ends abruptly after seven short episodes and many loose threads are left untied. 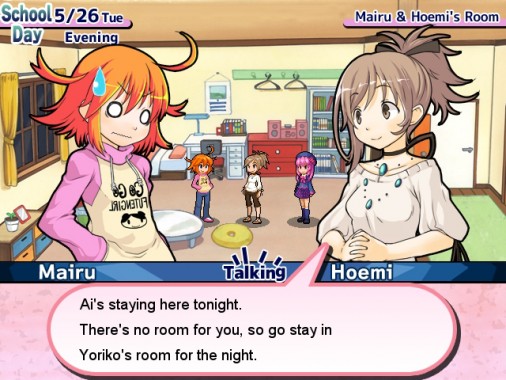 Gameplay
This is a “kinetic” or linear visual novel, so expect one button that performs just one function; “Next”. In this case both space bar and enter fulfill that role. Unfortunately for visual novel fans who are used to more elaborate titles there are hardly any options or menus, no save slots, UI adjustments or dialogue trees.

The game automatically saves after each episode, and only after each episode so if you quit midway you’re forced to mash the space bar until you reach where you left off. Aside from seven story chapters there are also five sub episodes or spin off events you can explore on the side. 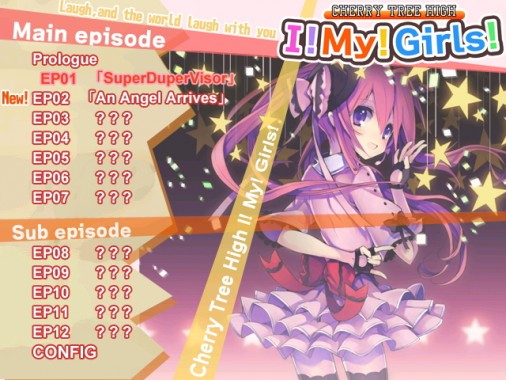 Visuals
The first thing you’ll notice about I! My! Girls! is the fact it not only has character portraits and background art like most visual novels but little character sprites moving around, reminiscent of retro games. While this adds a more dynamic layer to the game, I think it hardly improves the core visual novel experience. These games should be about memorable atmosphere created by dialogue, portraits and music all working together.

Audio
Luckily, this game has some groovy tunes and jingles visual novel fans would love and feel right at home with. There are no character voices though, which isn’t a deal breaker as plenty of traditional games such as RPGs function perfectly fine with simple text. 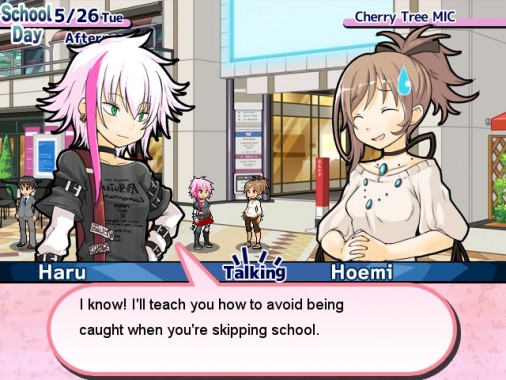 Overall
I! My! Girls! starts off on uneven footing and it concludes in much the same way, no doubt to be continued as the story feels hardly finished. It’s short enough to finish in one night, there are no branching paths and the characters are far from memorable.

However there are chuckles to be found, you might smile a little and the game ultimately has heart. Not to mention it’s priced at only $3.99 making it worth a look for fans of the genre, just don’t expect a comedy masterpiece and you might find something to take from the experience.