Digital distribution has given many independent and passionate video game developers an opportunity to share their creations with the rest of the world, giving them a chance to jump all the distribution hassles and charge bargain prices to consumers. Platforms like Xbox Live Arcade and Steam have allowed many great ideas to surface, coming from talented individuals from all over the globe. Gamers will remember a little independent and free PC title called Cave Story, which would later be picked up by Nintendo for a proper release on the Nintendo Wii and Nintendo 3DS.

Cherry Tree High Comedy is a dating simulator style game developed by an independent Japanese developer, 733, and picked up for localisation by Nyu Media Ltd and being distributed digitally by Capcom. The game is available for purchase on the official website now with release on other digital platforms to follow. 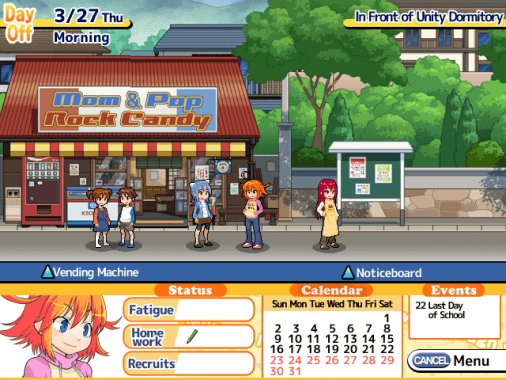 Before I get into the premise and setting of Cherry Tree High Comedy Club, it’s worth noting that the localisation didn’t just involve translating the original Japanese script as accurately as possible into English, it involved a heavy bit of Westernisation, much like the Ace Attorney games. This means that many changes have been made to the original context to make it more Western oriented. The original Japanese version takes place in Japan but in this localisation the game takes place in North America. With that, the character names and profiles were changed in order to make them fit into the new sitting, and much of the dialogue and culture references have been altered as well. That said, the setting still looks very Japanese as the main town has a Japanese temple even, but the translation team have cleverly covered their tracks as convincingly as possible by making it seem like a multi-cultural American town. With that in mind, let’s move on to what this game is really about.

Cherry Tree High Comedy Club takes place in quiet countryside locale called Cherry Tree Town, and players play the role of a high spirited high school student by the name of Miley Verisse. Miley is a passionate fan of stand up comedy and loves the idea of making people laugh, and with that passion she decides that she wants to start her very own Comedy Club at her school, Cherry Tree High. However her rival, Octavia Richmond, who is also the head of the student council, informs her that starting a proper school club isn’t a simple ask as she will need at least five willing members to formally join the club before it can be established. Not only that, but the deadline is at the end of April and when the game starts it’s already March, so she has very little time to work things out. Miley quickly realises that finding additional people who share a similar passion for comedy is not going to be a simple task.

It’s a fairly simple plot akin to those of slice of life comedies you see in Japanese animation. It’s all very light hearted and happy, and contains a lot of humour and charm. There is a fair bit of characterisation involved here as you interact with the game’s colourful cast. There are some serious undertones just to make the setting and characters more relatable, but it is generally quite uplifting. Apart from the main underlying plot of starting a Comedy Club, the experience that you have with the town and characters really depends on you. It’s one of those player driven experiences that allows you to choose how you interact with the game world and what characters to interact with and how. Overall, it’s a nice game world that lets you escape and unwind a little. 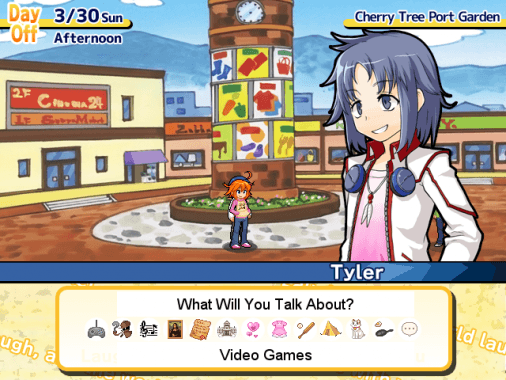 Being an independent game developed by just a handful of inviduals, Cherry Tree High Comedy Club looks decent enough. It looks like one of those free browser based video games built with flash. It’s still a decent enough 2D effort with simplistic character models and backgrounds, and the colour scheme is appealing enough. What really stands out about the game is the artwork, as you’ll get to see plenty of beautiful character illustrations. The character designs are quite nice, nothing unique but still charming enough.

The soundtrack is as upbeat and happy as the rest of the game, with fast paced  jazzy pop tunes akin to a Shin Megami Tensei: Persona video game. The music is pretty catchy but there isn’t much variety, and so it can get pretty boring fast. 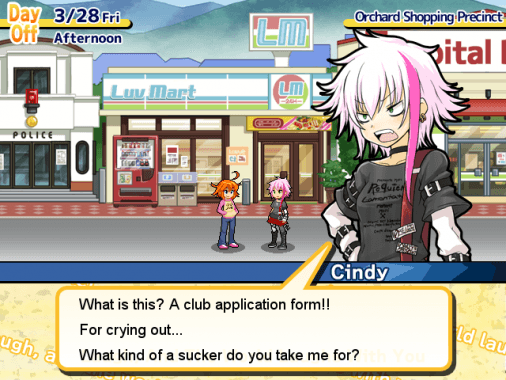 Cherry Tree High Comedy Club uses a dating simulator like game structure, where you essentially engage in various activities and simply socialise with the game’s many characters. The goal here is to build on Miley’s character and also her relationships with other characters. In a way, the game structure is a lot like the dating simulator portions of Shin Megami Tensei Persona 3 and Shin Megami Tensei Persona 4.

The game progress on a day by day basis, with each day divided into Morning, Afternoon, and Evening. Activities generally involve socialising with characters or engaging in activities like doing homework, watching television, playing video games, and various other things.

As Miley, you need to work on her repertoire of conversation topics, and these topics include video games, music, fashion, and several others. You build Miley’s knowledge on these topics by engaging in various activities like reading magazines and watching television. It’s important to build on Miley’s repertoire as it helps her communicate with characters more effectively. 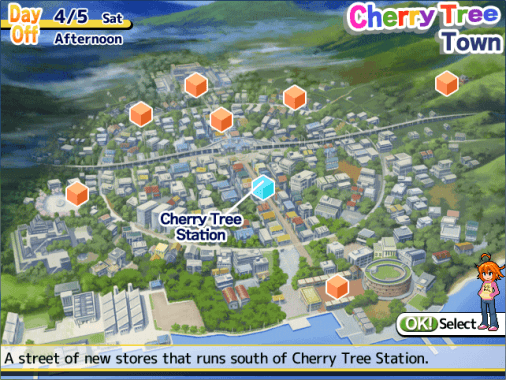 Miley’s goal is to recruit three people into her Comedy Club, as she already has herself and her best friend Harriet as members. There are six potential recruits, and you have to essentially max out your relationship level with at least three of these potentials before the game duration ends (end of April). Knowing the character’s likes and dislikes is key to knowing which topics to talk about in order to speed up the relationship development.

It’s a fairly interesting game that’s nicely paced, and you need to manage your time and days before the deadline at the end of April. It’s a challenge to figure out whether you want to spend time building your own repertoire that will help in socialising, or trying to figure out the characters better in order to pick the right conversation topics.

The localisation is actually quite good, as the dialogue is fun and the characters are expressed really well and have a lot of personality. The localisation team did a nice job retaining the flow and charm of the dialogue and the Westernised elements actually blend in quite well. It’s a very short game that can be completed in a couple of hours or so, but it’s a fun and relaxing ride. Still for its price it could have used a lot more game time but there is some minor degree of replay value given that there are six potential relationships to maxmise. 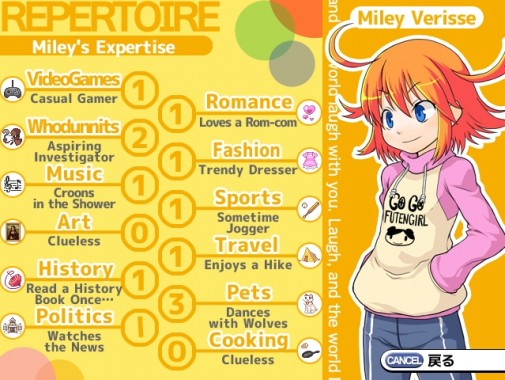 Cherry Tree High Comedy Club is a nice little indie video game with very modest production values. However, it’s still a nicely executed dating simulator style game with some fun characters, good dialogue, and pleasant and colourful art style. It’s a fun and relaxing game that’s good for what it is. Graphically and musically it’s nothing really special as it resembles those free browser based flash video games, and it’s actually really short since you can complete it in a couple of hours with some minor incentive to play it again. For its price, it could have been a lot better but if you’re curious to try an independent Japanese video game localised for your convenience, then give Cherry Tree High Comedy Club a shot.