Overview
Many years ago, when it was cool to use Yahoo! Games as a source of entertainment, I would spend hours playing Grafitti – a small game that let players take turns drawing random words while a crowd guessed away. Charadium is the first game I’ve played since then that stays true to the concept of a live drawing game, with that age-old Pictionary theme kept in the forefront of the experience. Of course there still are differences to be found though, as this romp has more features than an iOS user could ever want, with modes for both multiplayer and single player fans alike. Even with all that though, one still has to wonder if this art-studio in an app has enough charm and appeal to actually remain relevant for a long period of time. What’s the answer? Here is my review for Charadium II for the iPhone. 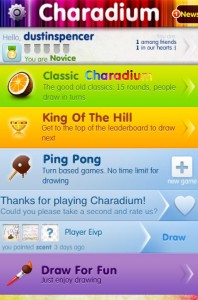 Gameplay
Pick one of three words. Doodle it with your finger for a crowd. Let the madness begin. That’s honestly the gist of Charadium as when it comes to actual mechanics, there is very little needed to do other than draw or guess words. Thankfully, there are four separate modes in Charadium that each target a different audience and even though the gameplay rarely changes, I would think any budding artist would be sure to find their flavor in a short time. The first element that any recent “DrawSomething” fan will notice is that there are 8 drawing utensils at the player’s disposal at all times (a major step up), with 18 different colors to choose from to create your own masterpiece. Players can use the pencil for quick accurate strokes, a paint brush for much thicker lines, and even a “magic” pen that instantly connects corners and gives any sketch a professional look. The variety is plentiful, and never once did I feel like I needed more art supplies to draw out the words I was given. 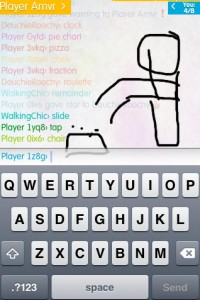 As far as modes go, the “meat and potatoes” of Charadium is of course “Classic Charadium”. This mode lets players take turns guessing words, where each participant has their own chance to draw. Whenever it is your turn, you must pick from three different terms, and then draw out your visual representation of that word in true artsy form. The canvas itself overlays the chat, and even though there is a full fledged guessing game going on behind your doodle, the busy chatroom never interferes with what you’re doing and can even assist the player as seeing those random guesses can give you a better idea of how to make your picture more obvious. To make things more chaotic, each player only has a short time-span to draw their word and if they fail to do so, hints will start to appear to the crowd that narrow down what your picture could be. For instance, if I am drawing “Banana”, the crowd would begin to see B _ N _ _ A. This lightning round set-up ensures that no-one acts as a spoiled sport and does nothing, and allows players to jump-in and out of games on their own without worrying about ruining anyone’s experience.

King of the Hill works in almost the same nature, but has the player who guesses the word draw next. This mode is a bit more competitive, but the only problem I had with it was that many eager artists would draw out the word with their finger, rather than a picture. There is a disciplinary vote-off option to counter-act this behavior (or the very common doodles of male genitalia), but with three votes required it can be a bit hard to garner support from users who are all performing the same frustrating actions, meaning it may take a while to find a room with a mature user base. 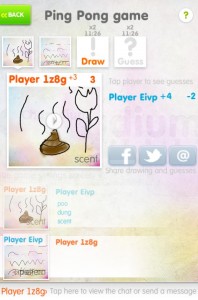 Ping-Pong mode is a completely different game altogether, ditching the timer and live gameplay to let players draw on their own schedule with up to 4 friends allowed in a session at once. As fun as all three modes can be, the terms you are given can hamper the experience. Even though there is a large variety of words overall, I still found it hard to draw out a word like “termination” in such a short time, and other offerings can be just as complex which seem to make users want to spell out their word rather than guess it. Those who are completionists though are sure to love the many achievements offered for performing up to par, as each player can rise through the ranks based on their personal scores and feats. I never once experienced any lag in a live match, and everyone seemed to be having fun when the entire room were participating in rounds as they should.

If you dislike the whole “live” game aspect, there is a drawing app included that lets you practice or just paint what you want at your own leisure. Yes, I know. There are tons of apps like this, but I still found myself using it almost as much as the main game and the option to save and send pictures makes the small inclusion have plenty of reasons to come back to again and again.

Visuals/Audio
It’s really hard to play critic with the visuals of Charadium, as you literally control how good your drawings are, so we won’t cover graphics in this area. The presentation of Charadium though could use a bit of work though, as having a keyboard take up half the screen can make the game feel a bit limited if you are playing with anything other than an iPad. For a game based on art, I also found it a bit odd to see generic menu design as the main hub for modes leaves a bit to be desired and comes off as a bit cluttered, overall. Of course this won’t effect the game for anybody and is more of a nitpick, but hopefully we can see that addressed in a future update. 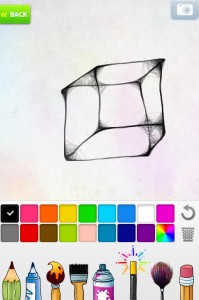 There isn’t much to say in terms of sound either, as all the player will ever hear are minor effects when words are guessed. Again, this is also not a huge gripe, as I doubt many of you will be too worried about hearing a tune play while you are trying to guess some random sketch. The sound effects are chipper though and do their job at making you feel like a winner when needed.

Overall
Charadium may be a bit generic by design, but still reigns supreme when it comes to multiplayer drawing titles on the iOS. Boasting enough tools to assist any budding artist in creating almost any term imaginable is enough to make this casual title appeal to the masses, but the competitive modes included within are sure to interest the more hardcore due to the addictive nature of the game, making Charadium suitable for all. Yes, there are plenty of other contenders out there at the moment, but before you draw something, you should try Charadium instead as it truly captures what gaming on the device is all about. Simple and addictive fun.