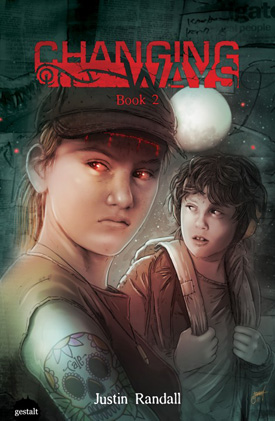 Changing Ways Book 1 was a rare breed; violent, frightening, and absolutely gripping. The story, characters and artwork were all some of the best the industry has to offer, and I couldn’t wait for more. Book 2 takes the ball and runs with it in a big way. It may not focus as much on the fear element this time around, but Randall’s characters and story are just as gripping as ever. The tone of the artwork has notably changed as well, but it is still wonderful to look at, and captures the feel of the story perfectly. 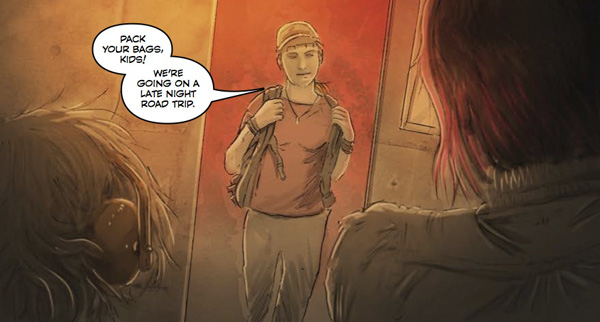 It has been 10 years since the red lesions and marks appeared on people all over the world, and Jessie Barrot and her younger brother Alex have been trying to survive. After a traumatic incident on that fateful night, their father, distraught and blaming himself for not being able to protect his family, left his kids with their aunt and set off alone on a search for answers. Since then, Jessie and Alex have been alone, traveling along and staying in hiding so that nobody knows their secret; that Jessie is marked and Alex has the incredible gift of super-hearing.

Book 2 goes a long way to explain the events that are happening in the world. Why the markings have started appearing and what they all mean. A lot is still left unexplored, but it is definitely more than we had in the first volume. By doing this, readers will want to go back and read Book 1 again, to try and make sense of all the chaos. This volume is also far more linear than the first, with the story not jumping backwards and forwards aside from a few key flashback sequences. The linearity of the story makes it a lot easier to get into as you aren’t jumping around the place.

Since this book explains a lot of the chaos and the confusion, a lot of the uncertainty that created the original’s tension. Here, that uncertainty is replaced with imminent doom, and it is a transition that works well. We don’t know exactly what is coming for the characters, but we know it is going to be trouble when it finds them. It is a sign of Randall’s talent for writing that the motivation behind the tension and fear has completely changed, yet we still feel the same emotions as we read.

As I started reading, I was worried that the decade-long time skip from the first book would cause some problems, notably in character development and reader empathy. However, I was happily proven wrong in my assumptions there, as the characters are so well defined from just their first appearances, that you are immediately drawn to them. It is also interesting to see the change of character that these people have undergone in 10 years, becoming almost unrecognizable. In this way, readers don’t necessarily have to read Book 1 to ‘get’ Book 2, but doing so really lets you see where these lost characters have come from, as well as giving you a good idea as to where they are going.

Justin Randall’s art style is magnificent to see. It looks like photos that have been washed out and touched up in Photoshop. It just looks so natural and real that it is hard to grasp that these aren’t photographs that were edited on a computer. Characters are all really well-done, and even the minor background characters have their own uniqueness to them. 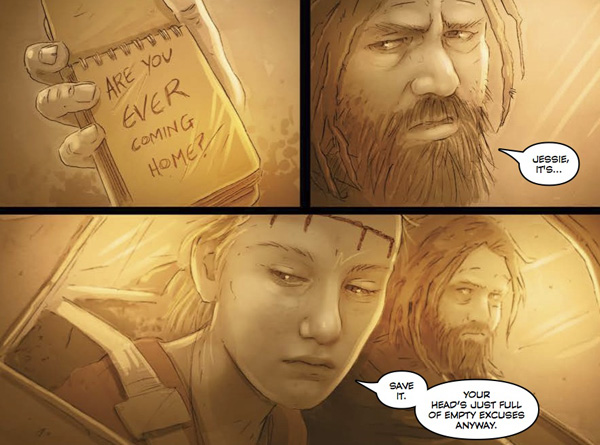 The artwork is as different in tone from the first book as the writing with, and this is a cool thing to see. In the original, the use of shadows and rain to obscure large parts of the book was an excellent stylistic choice, as people always fear what they don’t know or what they can’t see, and darkness is the greatest tool for portraying that. While here, we KNOW what is happening, so instead of panels and pages hiding in the shadows, everything is out in the open for the world to see. The juxtaposition between uncertainty and shadows to knowledge and light is such an impressive tool.

There is something in the water over at Gestalt Comics. Those guys are absolute comic book magicians. Changing Ways Book 2 continues the story of a broken family from Grey Oaks after the world has gone to hell. The story and the characters will stick with you as you read, and the artwork although notably different from the original, is still worthy of display in a museum. While I wasn’t as scared reading this book as I was with the original, I was just as gripped, cared just as much about the characters (except for Cassie), and am dying to know what happens next.