Gamevil’s latest game takes elements of pictionary, making a new mobile and social game called Chalk n’ Talk. Gamevil has tried to recreated the social nature of pictionary by putting the drawing and guessing elements of the game on an online chat room. In integrating such social elements into the gameplay, Chalk n’ Talk is a unique guessing game for iOS devices. 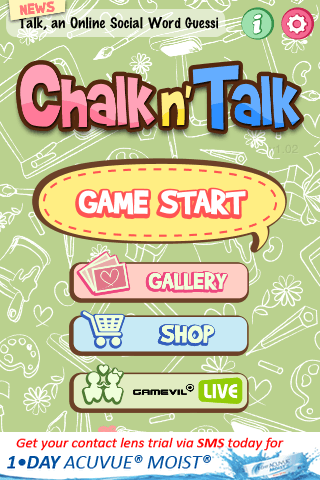 The actual gameplay of Chalk n’ Talk is really simplistic. Players enter a chat room and are given the option to draw or guess. The guessing players are given clues as they progress while the drawer, equipped with a few colours of chalk, tries to draw the word they were given. Both systems of input are easy to use, either typing or drawing on the chalkboard interface. However, there is a bit more to the game than just playing a guessing game with random players.

Chalk n’ Talk also has a social element to it, where you can add friends to lists and verse people in private chat rooms. However I think this artificial form of drawing and guessing kind of takes away from the fun of the game, which is basically based around the idea of random people drawing really crazy things. There are still other social elements in Chalk n’ Talk though. By going into the practice area to develop your hidden artist talents, you can upload your favourite drawings to the gallery. Taking a look through the gallery, it is pretty obvious that some people are rather skilled with chalk, and some of the pictures I have seen so far are pretty good considering they’ve been drawing with a finger on an iPhone (or iPod touch or iPad). Players are given the option to rate these images as they see fit. 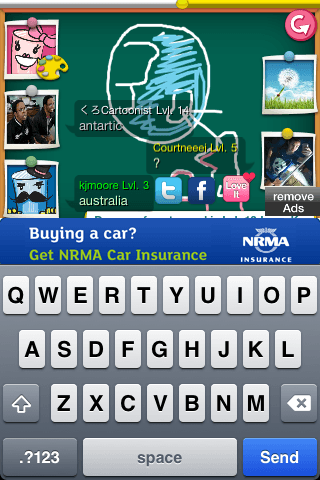 There are a few problems I have with Chalk n’ Talk. Firstly you are playing against real people. While this is really what the game is all about, being a socially driven game, it has both its pros and cons. For the pro side, it makes the game less repetitive. The player’s levels can vary, and often some of the drawings and player interpretations are hilarious, which is all part of the fun of traditional pictionary games. However, a con comes out of the anonymity of players. Because these aren’t you’re friends you are playing with in a physical space, I have run across a few players who don’t play by the rules, so to speak. This basically consists of players who draw inappropriate pictures, using the ‘talk’ side of Chalk n’ Talk to ramble and irritate the other players or not making a significant effort and just writing the word instead of drawing. There is always the possibility to ask the other members in the room to kick them out, but sometimes it can be really entertaining. Other times it can be a real annoyance. Despite having these varied playing experiences, the game can still become repetitive though. 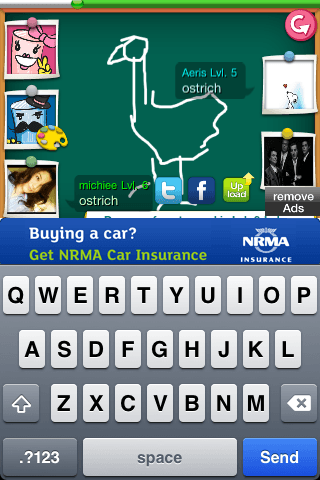 Because the graphics are based on what players have drawn, there isn’t all that much to comment on here. Instead it might be better to talk about the tools that are given to players in which to create their own graphics. The colour pallet is rather limited, ranging from white, blue, pink and other typical chalky colours. However, by winning games and earning points you can buy different brushes and canvas to really help uncover the inner chalk-artist deep within. While it is cool that you can buy these, some of them seem a little weird and I can’t imagine them being too helpful in trying to draw an image someone would be able to guess. The ones that seem somewhat helpful often require a lot of points. As for the audio, there isn’t anything really special going on in this department. The music fits with the theme of the game I think, but the sound effects can be annoying at times, most notably the “ready” before each game starts. 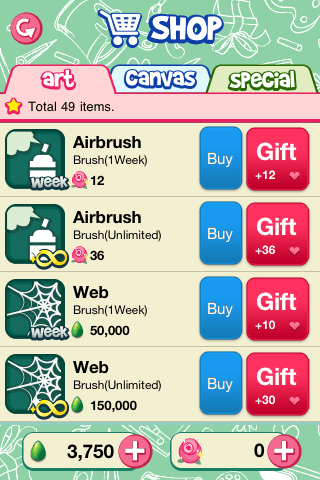 Chalk n’ Talk has some value in terms of graphics, interface, sociality and concept, but I don’t know if iOS is the best platform to put all these elements together. Because the game is somewhat repetitive, it is a nice little twice waster, and would work well as something on the side – probably on a social platform like Facebook or something along those lines. It is an ambitious attempt by Gamevil, but just falls short of its full potential as a highly playable game. 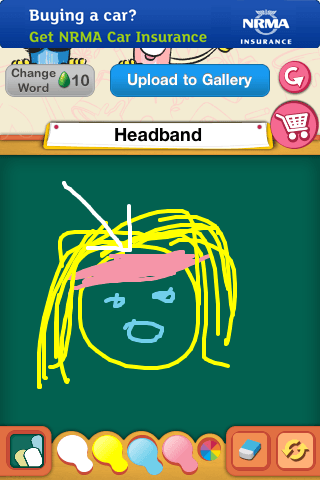 Overall I give Chalk n’ Talk.