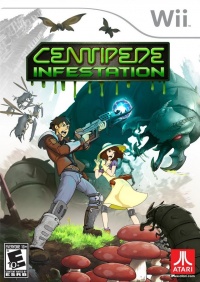 Overview
After what felt like an eternity of neglect, I dusted off my Wii console and brought it back to life. I looked at the Centipede: Infestation case and grinned. I knew this was going to be a long night. Once I attained essential food stuffs, I locked myself in the bedroom – locked and loaded to kill bugs.

Story
In a world where giant bugs roam freely, the world seems to be losing life as it turns to a barren wasteland. Some people think there is a correlation between the growth of the bugs and decaying of the world.

Living the life of shooting bugs, an orphan named Max rarely seems to fit the hero persona. As a renegade, he tends to keep to himself and executes bugs in the wasteland for fun; or is he avoiding the scars of his past? The bug slayer meets up with a girl named Maisy who is reviving the barren wasteland to a usable garden. After defeating bugs in Maisy’s garden, Max decides to protect her while she continues her journey to find her mother and make the world green again.

Starting off with a regular pea shooter, Max can upgrade his weapon with many power-ups during each stage. Power-ups have a short duration and provide unique attributes to the original pea shooter. The eight potential gun upgrades are as follows: flamethrower, missile gun, machine gun, laser gun, force gun, freezethrower, lightning gun, and toxic gun. Once collected an upgrade is stored in your directional slots. By pressing an occupied directional, the upgrade will be used immediately. Additionally, players may collect more than one of the same upgrade and combine it to do more damage as well as longer range. 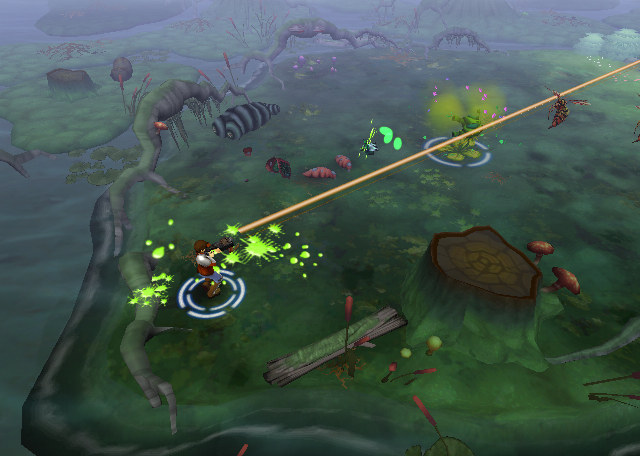 How about discussing my most and least favorite weapon? My personal favorite gun upgrade is the laser gun. Initially, the gun will shoot in one direction and pass through multiple enemies. However, by collecting two laser icons, you will gain a double laser that shoots in two directions. Rotating your character with this gun will prove extremely useful for decimating hordes of bugs quickly and effectively. My least favorite weapon is the force gun. While pushing enemies is fine and dandy, I would rather have a flamethrower torching the critters. The force gun pushes enemies back and also prevents projectiles from hitting the character. Even though negating enemies attacks is great preventative, this gun lacks the kill rate of other weapons. 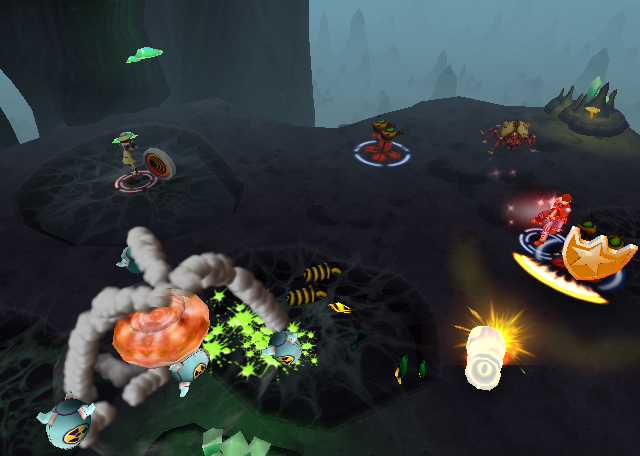 Along with weapon power-ups, some bugs will drop player enhancements such as shield, speed boost, and rage. If you happen to pick up the shield icon, you will be able to withstand a hit without losing a life. Lives are numbered and can be lost easily just by being touched. Speed boost provides you with additional run speed allowing you to move more freely and potentially escape a closing in centipede. Finally, the rage power-up makes your character really angry! Just kidding… But seriously, the rage makes you invincible for a short duration will increasing your attack damage.

Ants, and caterpillars, and grubs! Oh, my! With an array of enemies to fend off, each has a weakness and can be exterminated. For instance bomb spiders are not afraid to get up in your business. Do not leave these guys alone for too long, or they will explode in your face. Centipede’s are my favorite foe because they provide a challenging experience through avoidance and precision shooting. Before a centipede will enter the level area, a glowing outline shows the directional path that the bug will take. Upon entry the centipede will show a red glow in its center mass. After shooting the red glow, the centipede will break up into two separate and very alive parts. Hitting each remaining segment will cause the head to break off and continue towards the player. To destroy this beastie once and for all, shoot the head continuously. 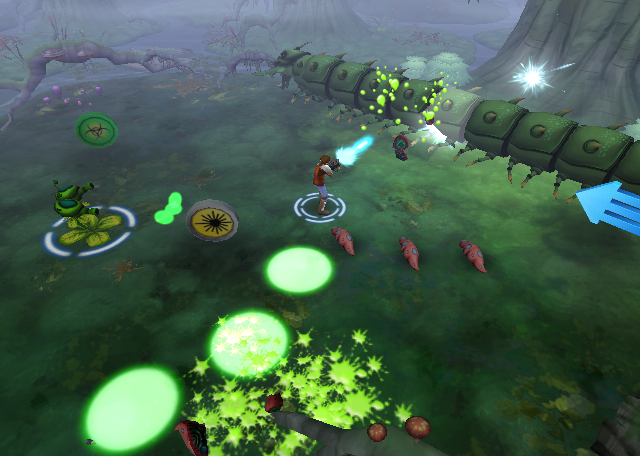 Boss battles are separated into their own levels and provide a challenge for novice players. These battles are all about developing a strategy and adjusting to variant environments. For instance, the final battle with the Alpha Centipede begins with Max continuously running away. Avoiding object collision and collecting power-ups will keep Max from getting injured as well as damaging the colossal bug.

During the initial run-through, you can choose to play either on normal or hard. After completing the game on either mode, you unlock the insane difficulty. Increasing the difficulty provides a greater challenge and more potential points for the player. Playing on harder modes will also make way for some in-game unlockables.

Centipede: Infestation offers a high replay value because of the sizeable amount of unlockables that can be acquired through varied gameplay. Completing levels on certain difficulties will grant the player new skins and playable characters. By the end of your first run-through you will be able to switch characters to Rivet or Maisy. Rivet is Max’s brother, but I don’t want to spoil how you meet him.

Considering replay value, players may unknowingly acquire achievements and medals as they progress through the game. Achievements can be completed in each level and earned by meeting certain requirements. A potential achievement requires the player to only use the pea shooter through the stage without power-ups. Medals are based on your resulting score at the end of the levels and are ranked bronze, silver, and gold. Acquiring a plethora of gold medals will also unlock an achievement. 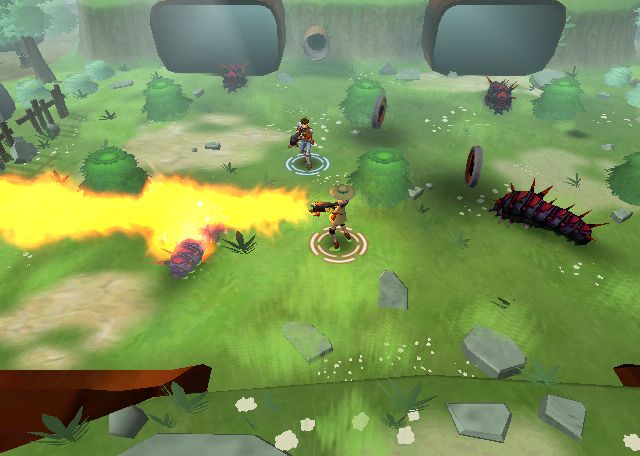 If killing centipedes alone wasn’t enough, have a friend join in on the fun by playing co-op campaign. Set the difficulty to insane and have a blast yelling at your partner to back you up or get out of the way. Always remember sharing is caring when it comes to using power-ups!

Graphics/Audio
Cut-scenes deliver a story that is expressed almost like an anime mini-series. While not every cut-scene is fully animated, several scenes incorporate a complete animation of climatic events. Other mission scenes provide a short briefing between Max and Maisy with no major artwork done. But I would not expect the developers to make long scenes for 40+ levels.

Environments are tightly spaced and do not spread over much ground. With limited run space, you may find it hard to avoid all possible dangers. Mushrooms do not help the cause by spawning around the map reducing maneuverability. A more interactive setting as well as larger maps would provide an even greater experience. However, the tight area keeps the intensity high. 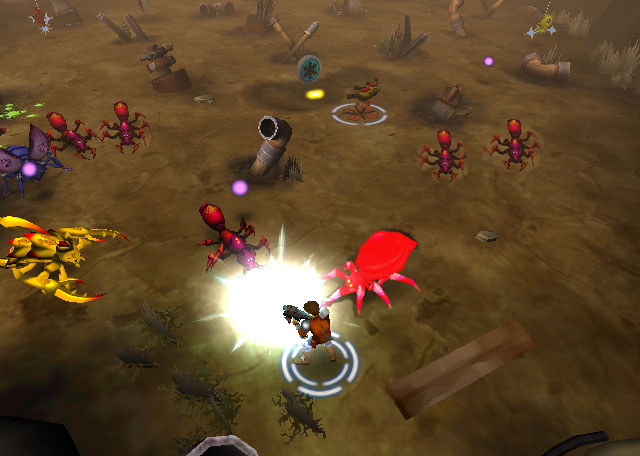 Sound effects prove effective especially with gun customization. By cycling through the different weapons, you can easily discern the fire of a flamethrower and electric current for the lightning gun. Throw in a few bomb spider explosions and the splatter of goo residuals, and you’ll have some entertaining audio.

Overall
Centipede: Infestation provides solid gameplay and great supporting assets that bring a player back for more. Offering a large set of achievements and unlockables, the action shooter allows for a great deal of re-playability. A variety of weapons enables players to devise their own tactics to survive wave after wave of creepy crawlers.

When you pick up the laser gun for the first time you feel powerful. And once you upgrade it, you will believe you are unstoppable. Perhaps you will be…

Centipede: Infestation showed me how to exterminate with