Cavorite 2, like it’s predecessor, is a puzzle platformer for iOS, created by 4-man team, Cascadia Games (owners of one of the coolest logos around, by the way). It tells the story of Dr. Cavor, and features the use of his invention, Cavorite, in the solving of numerous and varied puzzles. 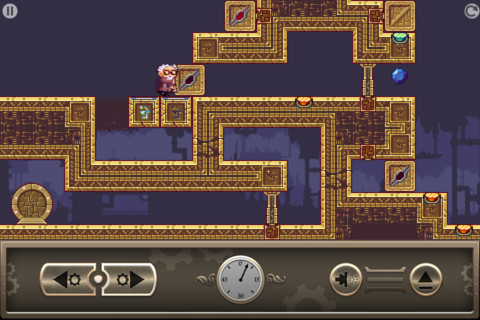 In the first Cavorite game, Dr. Cavor flew to the moon using his invention, Cavorite, a substance that negates the effect of gravity on an object. Subsequently trapped on the lunar surface, he finds an alien civilisation, and collects gems to power his flying machine to launch his spacecraft to get back home.

In Cavorite 2 it is revealed that shortly after take-off, the ship plummets back to the moon’s surface, and Dr. Cavor is once again sent on a journey to collect more gems, solve more puzzles, and hopefully get home.

All this is told in a brief bu the to-the-point cut-scene, in the form of a collection of static, but nicely rendered images, with accompanying text.

Interestingly, the character of Dr. Cavor, as well as his invention and adventures on the moon, seems to be inspired by H. G. Wells’ “The First Men in the Moon” novel, written in 1901, which also featured an alien civilisation living in the moon. 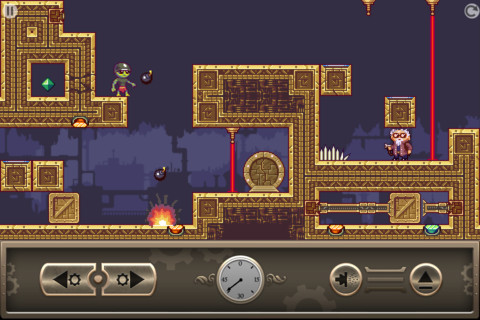 The interface is simple. Left and Right buttons, as well as a jump button let you move around the levels, and push boxes around. And there is a “Spray Cavorite” button lets you apply the substance to boxes, floating them up. You can also double-tap the Spray button to hold onto the box as it floats up, allowing you to steer it, and reach higher than you can jump.

Throughout the levels you will encounter things like pressure pads, disappearing blocks, laser beams, and a number of different alien creatures. Using your knowledge of how these things work and interact, you’ll be working to collect any gems, and then reach the exit. Each level is one screen big, making them fairly straightforward to analyse and figure out what you should be doing. 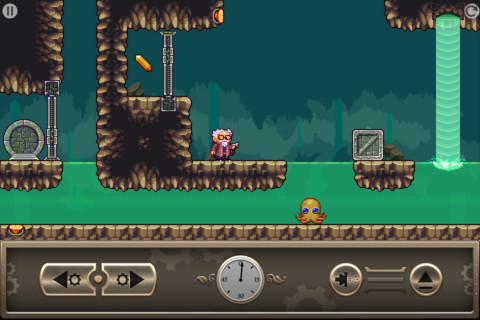 Knowing how to beat a level, however, does not mean you can beat the level right off. Though there isn’t really any physics or randomness to the game, you often feel as though nothing is under your control. Bugs, tight jumps, and controls that are fiddly at times, leave you frustrated; and, although you can complete the levels eventually through trial and error, it feels like the game is cheating you out of your plain victory. This makes Cavorite 2 not just a cerebral game, but has an element of twitch and requires you to gain a level of mastery over the controls that most other solid puzzle games do not have. (Portal, anyone?)

Every time you complete a level, you are awarded a star rating based on the time you took to complete the room, how many of the available gems you collected, and how many tries it took you. There are 21 levels, per area, with 3 areas including their own unique look and new pieces added to the puzzles in each. You can also pay a small fee to unlock all the levels.

That said, the fact that everything is on one screen, and each puzzle is fairly brief, makes this a fun little time waster. The solutions can take some thinking about, but it’s always well within reach of any puzzle enthusiast. And that’s who this game is for, mainly; for anyone who loved the first Cavorite game, and was left wanting more, there’s more to be had here!

There are a ton of GameCentre achievements for you to unlock, too. 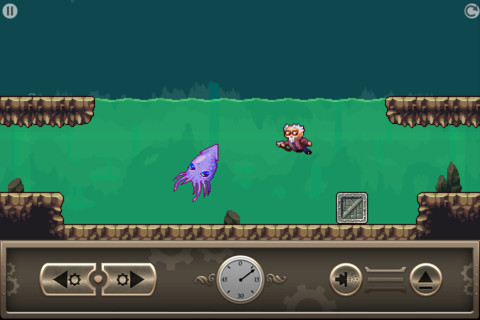 The soundtrack to this game is pleasant and well made, going solidly along the synth and 8-bit genres. The sound effects, too, are old school, with a chip-tune feel to them. The graphics, too, are in keeping with this style. Everything, apart from the UI, is made up of beautiful and detailed pixel art, with great animation and effects. There’s nothing to write home about or anything, but this is a simple puzzler, and the art and sound does a great job of setting the tone of the game. 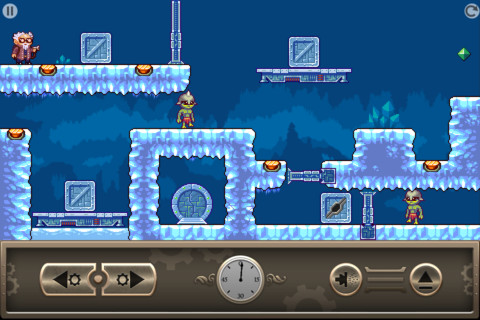 Even with it’s minor issues here and there, this is a solid platform puzzler. If you liked the first in the series, or just love brainteasers, this game is for you!