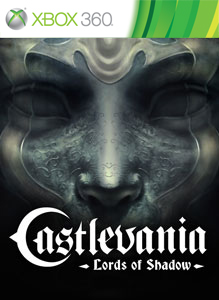 Story
“Experience Castlevania: Lords of Shadow from Kojima Productions and Mercury Steam in this third-person action game. The Earth’s alliance with the heavens has been threatened by a dark and malevolent force and it is the end of days. Play as Gabriel, a member of the Brotherhood of the Light, and experience an all-new Castlevania game unlike any other.”

Earth and Heaven have been separated and it is up to you to banish the evil and enable the departed souls of the dead to finally enter heaven. A prophecy has revealed that the dead have a message for you, and you have to head off to Pan’s domain in order to communicate with the dead and learn the message. I would continue, but I’m afraid of giving any more spoilers and you’ll just have to find out where the dead send you when you play the game; though I’m sure the title gives some of it away.

Gameplay
The gameplay strays completely away from what you would expect from a Castlevania game, but this doesn’t mean it is bad.This Castlevania is quite linear and the new gameplay involves exploring vast levels, and killing a lot of things with your combos and magic. Puzzles are scattered throughout the game, but none of them are actually that difficult and can be solved after a bit of thinking.

Throughout the game you will use devastating combos to dispatch your enemies. On easier difficulties it may get boring because you just spam the attack buttons, but on harder difficulties you have to dodge and time everything well in order to land a few attacks in. Magic is also in the game, the first of which is Light Magic which pretty much is just used to heal yourself. There are a few offensive uses for light magic, but healing is usually the primary use especially on harder difficulties. Since you have to kill enemies without getting hurt, or find magic fountains (that’s not what they are called, but they supply magic and it just kind of got stuck in my head; kind of like “Health Fountains”) to recharge your magic; and since you only have so much magic, healing is the first priority.

There are many massive boss battles that require you to figure out certain patterns and in the end defeat the boss. Discovering the patterns might take a few attempts, but once you figure it out most bosses can be beat pretty easily. The real annoyance I found is that there are checkpoints in the middle of a boss fight. Some people might feel that this is a good thing, but you don’t get full health again between checkpoints. If you hit a checkpoint with almost no health, you are going to have a very hard time progressing farther.

The game is split up into a whole bunch of bite-size levels. Each Chapter has levels within it, and the bite-size formula has good aspect and bad aspects. Since you can jump back to almost any part of the game without having to replay a massive level, you are able to enjoy your favorite moments immediately. The problem with this formula, is the levels seem slightly disjointed since you always return to the menu screen. I got used to it after awhile, but in the beginning it was slightly annoying; it was as if someone kept pushing me off my bike and I had to get back on and continue riding.

There are tons of things to unlock within the game, mostly upgrades but you need to purchase them with experience. As you progress through the levels you will gain experience. You can spend this experience to learn new combos and new spells. As you progress through the game, more combos and spells will unlock for you to purchase. There are also bonus items that don’t help you within the game that you can purchase with experience; however, it is mostly just artwork. There are also a bunch of weapon upgrades and hidden objects hidden throughout the levels. Usually there is one upgrade per level and a few gems and scrolls hidden around. The gems are used to increase your health and magic meters, and the scrolls reveal some backstory. You can’t always get the items on the first attempt through a level, and they may require you to return with a better spell or new move. This detail here, almost calls back to the old Castlevania gamestyle, but it is rarely required to turn back for those items. The entirety of the game is pretty linear.

Audio & Graphics
The soundtrack is superb. The epic music creates a perfect atmosphere while you are playing. This is the kind of music you would hear in a big movie title. The big boss battles are stunning, with music to match the pace of the battle almost perfectly. The only downfall in the audio is the melodramatic lines that the voice actors had to read; the voice actors were superb, but there lines were somewhat disappointing.

The graphics are sunning as well. The levels are massive, and the game is simply beautiful to look at. Every chapter is unique and carries its own mood as you play through it. The only problem I had was the fact that the game had a bit too much light. There weren’t many moments where I felt the dark embrace of a shadowy corridor, or the spookiness of a deep cave. I’m not completely complaining about it, because I hate games where the entire thing is dark and a pain to see; but this game could have done with just a bit more.

Achievements
The achievements are nice and will have you playing the game in its entirety. A lot of the achievements require you to pretty much buy everything within the game with your experience points. There are also levels to beat, collectables to find, weapon upgrades to discover, and a whole bunch of secret achievements that aren’t actually story based. I usually reveal the secret achievements if they are story based and don’t give any real spoilers, but in this case I cannot do that; so no achievement list for you. But I can tell you this: “you will be playing this game a lot, and quite a few times in order to get all the achievements.” In order to get some of the higher scoring achievements you need to beat each level once, then beat the trial you unlock on that level as well as beating it on the hardest difficulty (which are both unlocked by beating the level once). You can do both the trial, and the hardest difficulty the same time, but I wouldn’t advise it. Luckily, the disjointed level setup helps with the achievements a lot. Since every single section of the game is split up into bite-sized chunks, you can pretty much get back to any part extremely quickly.

Overview
The real problem that lies in this game is the fact that “Castlevania” is in the title. A lot of people expect a totally different kind of game and a different gameplay style all together. The story doesn’t even follow that closely either; aside from the vampires, werewolves, and skeletons. Once you get passed the fact that this game doesn’t play like the more popular Castlevania games you will be able to enjoy it a lot more. The game easily makes up for straying from the Castlevania formula by providing beautiful scenery, an epic soundtrack, fun gameplay, and a massive game with tons to explore and even more things to kill.
I give Castlevania: Lords of Shadow