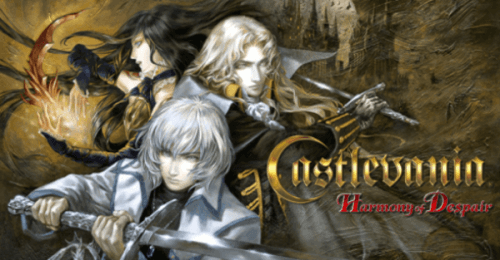 Castlevania… Konami’s Gothic game series that seems to survive time itself. Of course, it is a classic series that started out on the Nintendo Entertainment System back in the mid 1980’s. Famed for its clunky controls and insane difficulty, Castlevania started off with a character named Simon Belmont who’s mission was to defeat the most famous vampire of all, Dracula. Blessing the Nintendo family for several generations (as well as other console families), Castlevania has made its way onto the Playstation 3 via the PSN with Castlevania: Harmony of Despair. Featuring both solo and co-op gameplay, Harmony of Despair retains the classic 2D gameplay in HD graphics and some awesome music. So, will you despair if you download this game? 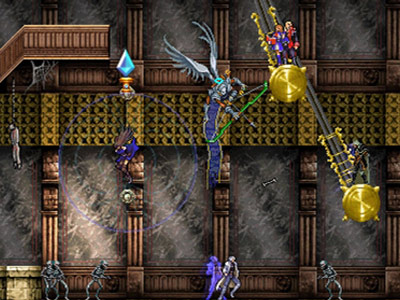 Gameplay
The gameplay of Harmony of Despair emulates the series staple 2D platforming. You will run, jump and attack your way through a gigantic stage. The objective of each level, separated as chapters, is to navigate your way to the boss and defeat it. They are usually a monster of some sort, one is even a four armed puppeteer with a gigantic head. There will be obstacles in your way, both enemies and environmental, such as spikes. Instead of the bare basics of the old days, Harmony of Despair offers a statistical approach, with stats like strength and defense contributing to the effectiveness of your character. Each stage has a time limit of 30 minutes to complete the objective.

What about the characters available? Well, unlike all of the Castlevania games, you can call Harmony of Despair the Castlevania All Star game or Dissidia: Castlevania. Castlevania features characters from the other games rather than introducing another member of the Belmont family. Off the bat, players can choose Alucard, Soma Cruz, Jonathan Morris, Shanoa, Charlotte Aulin, Yoko Belnades and Julius Belmont. Most of the time I had control of Julius Belmont and for good reason. He is equipped with the whip, so a long range melee attack, but his whip goes in eight directions, a positive in any Castlevania game. What I like about the characters is that they have their own distinctive style of gameplay. Alucard, another character I used quite a bit, uses magic rather than throwable weapons like the others. 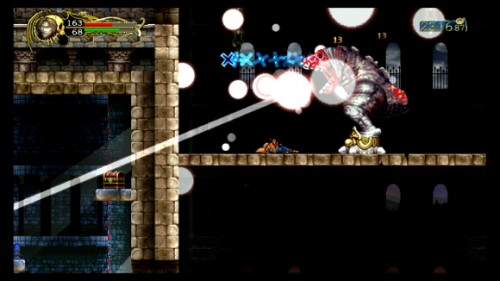 As you fight through the stage, you will encounter several treasure chests. They contain items that can power up your character. However, to equip them, it is not as simple as pressing select or going through the pause menu. You have to locate a grimoire, a book floating on a gold pedestal and opening that (with the R2 button) will allow you to access the status screens, as well as a compilation of monsters you have slain. Sometimes in these chests you may encounter gold, used to buy weapons, armour and useable items such as potions.

Going solo is all good if you play with your strengths in mind, but the focus of this game seems to be multiplayer. The game offers both local and online play. Local play supports up to four players, which is a bonus in a way because you could have four Juluis Belmonts at the same time. Each player can choose up to eight colours per character. The levels for solo play can be attempted but there is also a versus mode available. Online multiplayer supports up to six characters.

The gameplay went for a focus on multiplayer, which does leave single players more to desire. More often than not you have to avoid areas that rely on the multiplayer aspect of the game, which can be a pain. It would mean that every level will usually only have one path towards the boss that a solo player can take, eliminating the desire to explore, especially if they want to play the level more than once. Overall, if you enjoy this type of gameplay, then you will have a great time. I had fun, but I can only speak for myself. 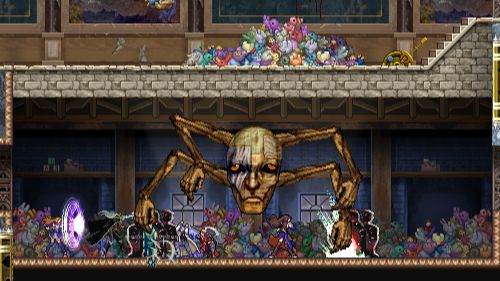 Visuals
Well… there isn’t much to say about the visuals considering this is a 2D platformer. It doesn’t mean there is nothing to say. First off, I want to note the menus. I actually like the design of the menu. They set out the game as a book of various chapters, which are what the levels are named. It fits the Gothic style the Castlevania games are all about. The levels themselves are one gigantic maze. Each of the levels have certain contraptions to progress through. The levels are a great mix of bright and dark colours to fit the various design of a castle. Like the menu, this fits with the overall tone of the game.

I do have to point out the character art. I have fallen in love with the designs. Not the sprites that you control (they don’t have any facial features), but ones that you encounter at the main menu and character selection screen. They emulate hand drawn artworks and look stunning. I especially love Alucard’s design. Great work from the art designer. 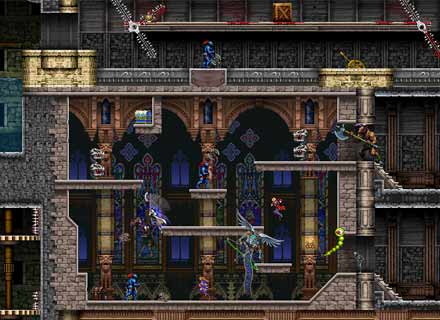 Music
The music you encounter in this game will come from previous installments of the Castlevania series, only reworked, just like Dissidia Final Fantasy and other related all star games. Tracks such as Castle Dracula (which is Alucard’s Theme) from Symphony of the Night, After Confession from Dawn of Sorrow and Ruined Castle Corridor from Aria of Shadows are all featured. Harmony of Despair’s version of Ruined Castle Corridor happens to be my personal favourite. The guitar work reinforces the desire to explore this castle and defeat the creature that lurks within it. The drums enrage you, the beat defines your course of action. Ladies and gentlemen, this is the music for the first level of the game. What a way for the game to start with such an epic concoction to lead you to what lies ahead. No matter whether you grew up with the series or not, you will appreciate the soundtrack. Each song has its own charm to it, whether it involves organs or grand electric guitar solos.

Overall
Castlevania: Harmony of Despair is an interesting one. Despite never experience the series before this, I had knew the basics of gameplay that has followed the series through. However, the game features a more adventurous route in the series, favouring multiplayer games, despite being playable for a solo journey. The solo half suffers as a result, although it does not make the game unplayable. The visual design of the game retains the Gothic theme of the series. The character artwork, however, is a highlight. The music revives past classics and turns them into an awesome collection of hard rock anthems to accompany the journey ahead. Despite the solo flaws, this is a game both Castlevania fans and platforming fans alike should download… if they have a spare $15 on their PSN account.