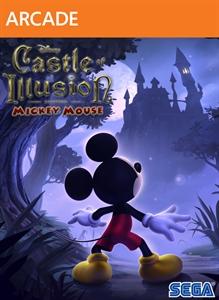 Overview
Castle of Illusion was one of those games on the Sega Genesis that a good lot of you didn’t buy unless you really craved having adventures with Mickey. If memory serves correctly, most kids actually saved their bucks back in those days for the likes of Sonic and Streets of Rage for the platform, leaving solid yet not as demanded titles such as Castle of Illusion to sit on rental shelves, finding a place in a different living room each week. Sega and Disney are ready to re-spark the magic however and bring back the hidden gem to consoles with a ton of revisions and upgrades included. Does this re-imagining give us a new appreciation, or is this one jewel that would have been better off locked in that famous vault? Let’s find out.

Story
Castle of Illusion Starring Mickey Mouse puts us in an enchanting tale where the player takes control of Mickey himself and must save Minnie from an evil witch by the name of Mizrabel. Yes, we have seen this concept played to death, but we are talking about Mickey Mouse here and more importantly – Disney, so I think that alone gives this remake a bit of a pass in terms of narrative. 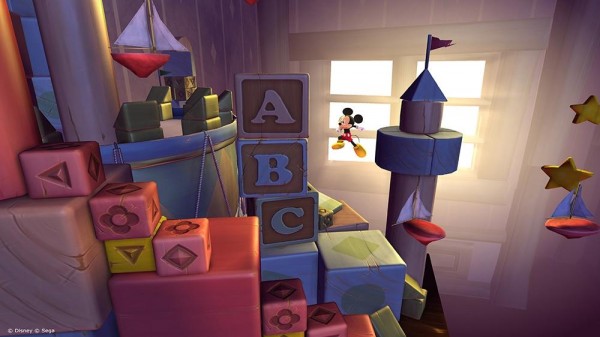 What really drives the story is a narrator who commentates on almost everything our round-eared hero does within the game, as well as the small and cute little cutscenes in-between certain stages. Does the writing reek of “Disney Magic” or put on an unforgettable show? Not really. It is however a relaxing and enjoyable experience due to the breezy plot, and those who have fond memories of the past game will more than likely get a good amount of smiles and laughs out of the famous mascot as he scuddles off to the rescue.

Gameplay
Replaying Castle of Illusion in this brand new format has been a nostalgic, blissful, and frustrating experience, oddly enough. The main objective in the game is to simply get from point A to point B by platforming throughout each themed stage. Mickey doesn’t have a lot of powers in this romp, and must rely on a simple jump to tackle foes with, which is also used to catapult to higher ground. Yeah, we all know that one hop can take you to a higher platform, but if timed right, Mickey can go a tad higher to get to hidden chests and more inviting items. Mickey also has a projectile attack where he tosses an apple or other themed item (which are collected throughout each stage), but this attack – while effective, lacks a satisfying delivery and feels a bit half-done as a result. 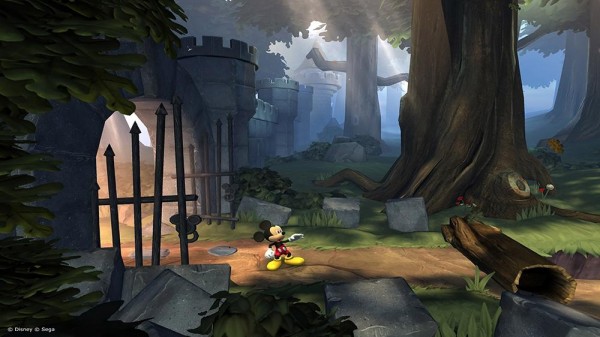 If you were lucky enough to experience the original, you might remember that diamonds and other gems were the bread and butter of the progression cycle. In this version, that has stayed true, but with a lot more diamonds to collect as a whole. Doors to latter stages are locked away until a certain number of diamonds are obtained, which gives the game a bit more re-playability overall. Once the third door is open in a world, the player must face off with a boss in one truly magical battle. Boss fights are imaginative and gratifying through and through, and make up nearly all of the excitement that can be found within the game. I will get to the reasoning for that in a moment, but when you are facing off with a bizarre stump who is rolling over our little hero, its really hard not to be sucked in a happier time when these battles meant something. Boss battles used to be a peak – or something to look forward to within every classic platformer, and while these are not perfect – the characters and enjoyable mechanics attached make for some memorable moments. 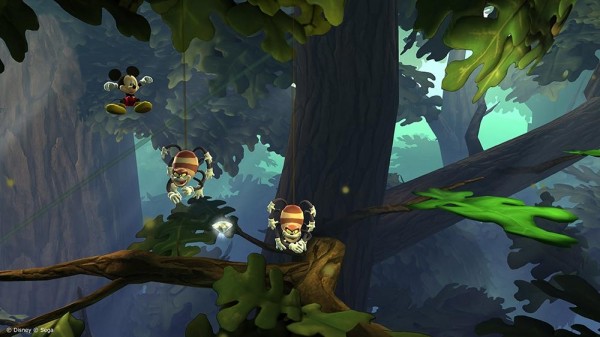 Now that I got the best out of the way, its time to cover that “frustrating” term I used. Castle of Illusion has some wondrous stages. They are not replicas of the original 2D game, but each world still captures those essences well enough, with some sharp platforming required to move onward in locations that at least feel familiar. Foes are also very common and range from ghosts to nutcrackers, usually requiring just a pounce on the head to defeat. Again, this is another positive. My negative feelings for Castle of Illusion come out when you put this protagonist in a fully realized world, as he just feels out of place. Sure, its Mickey, and he has been in some magical adventures – so the setting makes sense. Take away the narrator, the lively environments and enemies, and the seamless change of perspectives and you have one very shallow main character that can only jump and throw an item. Mickey just doesn’t feel like he was made for this game, but rather the game was built largely before his inclusion, and he was just thrown in. I get it, it is a remake of an old game and basic is expected, but with the light amount of challenge, Mickey’s bones are highly visible and showed what was a large waste of potential. 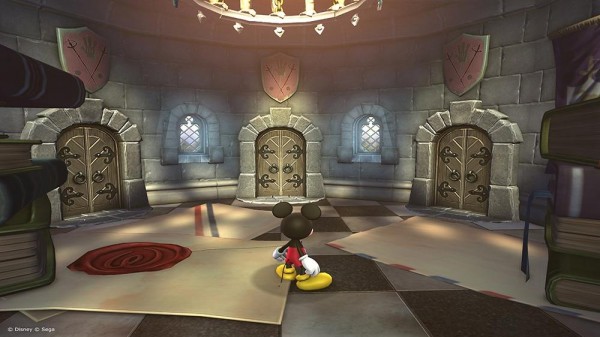 Getting back on a brighter note, it is nice to see that Sega incorporated some new mechanics this time around. In what feels like a seamless transition, Mickey can jump into a 3D of the world you are exploring at specific points throughout the game. This isn’t the most common of occurrence, but it did liven things up and offer a refreshing change of pace.

Visuals and Audio
No matter how “basic” I said our dear Mickey was to control, the visuals on Castle of Illusion are truly amazing. Each world is littered with color and pure life, with constant animation running that makes it feel as if you were in a major animated motion picture. When the game turns into a 3D platformer in short bursts, the effect still remains, but gives a new perspective for the player to appreciate. Mickey is slightly awkward when jumping, but looks great with his new 3D model, and the same can be said about Mizrabel and Minnie, who have made the jump nicely to the re-imagined Illusion. I will say that seeing the cutscenes lack proper animation is a bit of a shortcoming, but one that can be overlooked depending on the way you want to consume this non-so-serious plot. 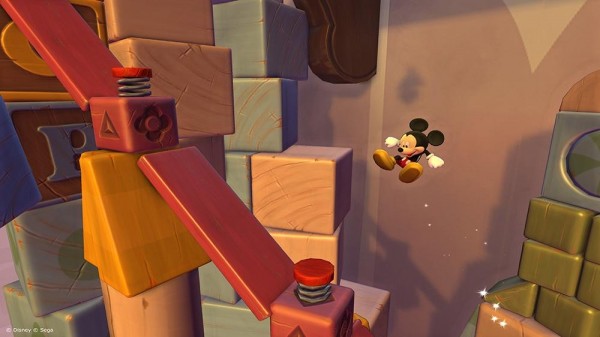 The music is lovely as well, with tracks that caress and compliment the background audio well without ever coming off as obtrusive or annoying, and for a game that could qualify as a licensed product, that is definitely a good thing. The narrator as I mentioned earlier is the star of the sound however, as his calm voice gives Castle of Illusion a new storybook-like tone that has a more welcoming feel – which means yes, this would be a good title to introduce to the little ones. Mickey, Minnie, and Mizrabel are also voiced- with each taking no hits in terms of quality when it comes to the voicework implemented.

Overall
Castle of Illusion Starring Mickey Mouse is a classic to some, but forgotten by many. The problem is, its hard to remake a game that only stood out for being solid compared to a lot of the other licensed fodder that hit shelves years ago, but Sega still did a good job at their attempt with this new version – giving in to the fans and making another solid experience. Notice a trend here? I am using “solid” a lot to describe Castle of Illusion, bringing me to my main point. The stages are masterful, the voice work- impeccable, but sadly, the character who is set to be the star falls short, causing the game to sit in a safe zone and present itself as a basic platformer, rather than the stunning tribute it could have been. Good? Of course it is, but those looking to control a legend will be disappointed to know that more hollow mascot resides in this revival.