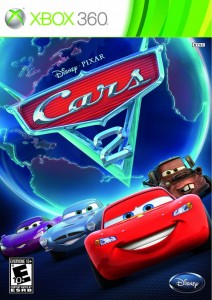 Pixar are an unstoppable force in animation, and every film they’ve done combines modern technology with classic animation principles, featuring fleshed-out characters in unique worlds, well-plotted stories, quirky humour, and plenty of heart without being overly sappy. They’ve constantly outdone themselves, reaching the pinnacle last year with Toy Story 3, as they wrapped up their original franchise with the same love for animation and story.

Cars 2 however, seems to be the first stumble for the studio. It appears that Cars is the go-to franchise for merchandising: under 10’s lose their freaking minds over Cars toys. The first film holds the record for Pixar’s merchandise sales, with a ridiculous $8billion in revenue. And with that comes the inevitable video game.

I tried not to let the “licensed games are terrible” assumption cloud my judgement of it as a game as I booted it up, and I was surprised. The film actually lends itself quite well to a video game: being about, well, cars, a racing game is a no-brainer, especially as the sequel focuses on a worldwide grand prix. Add the elements of the spy world introduced in the movie, and you have a competent Mario Kart clone. 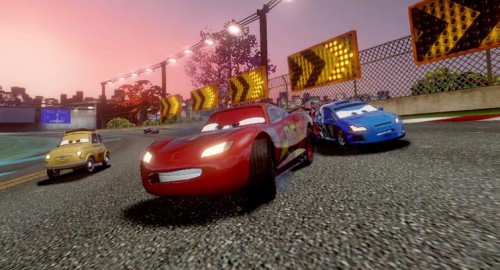 As it sticks to the racing genre, the game doesn’t need to follow the film’s story. As with Star Wars Pod Racer, it can function well as a game by just focusing on one part of the film.

The game is contextualised as a virtual training program for the spy organisation C.H.R.O.M.E., freeing the developers of the need to shoehorn in a linear story. Just race. That’s all it has, and that’s all it needs.

So just race with a generous selection of quirky characters. And just race across a series of worldwide cities presented as caricatures (Buckingham Palace, Tower Bridge and Westminster Abbey are not adjacent, but hey, artistic license is a wonderful thing). And just cheat with a range of spy weaponry.

At first glance it may seem like any another racing game, but Cars 2 mixes the zany weapon-based mayhem of Mario Kart with a weighty, realistic driving system that feels like a more “hardcore” driving game. Drifting around corners is a necessity, and mastering it constitutes much of the challenge. This is tied directly to the clever Energy system, which creates a central risk/reward payoff.

Now, bear with me here. Players have the ability to flip around and drive backwards, or go up on two wheels. Doing either is risky in itself; backwards means your steering is reversed, and driving on two wheels reduces your mobility. And both make it easier for other cars to knock you off-course. But if you successfully pull off these moves, you’re rewarded with an increase in your energy bar, which can be used for speed boosts. Using these turbo boosts is essential, with well-timed boosts often being the difference between first and not first. Further, players are given the choice between using a small portion of their energy for a temporary boost, or saving it up until it maxes out, to get a much longer, race-changing increase in speed, along with invincibility and the power to send other cars spinning. While it may seem like saving it up is the clear choice, sometimes strategic use of mini-boosts can be more effective. This trade-off adds a surprisingly deep, strategic element to the game.

There are other abilities that lift Cars 2 beyond a standard racing game. The ability to jump adds more than you’d expect, allowing a way to avoid obstacles and access hidden shortcuts, of which there are many. The bump mechanic is also a welcome addition, as players are granted the power to sharply bounce left or right, to knock other cars into danger, cause them to spin out (more so if they’re driving backwards or on two wheels), or to dodge obstacles at the last second.

The game modes available add some variety. Some focus on racing, some on attacking, some on precision driving. For example, the fairly unique survival mode requires the player to keep a power bar charged by collecting batteries lined up along the track. The player must complete a set number of laps without the bar dropping to zero. It sounds easy, but passing through all the batteries can become quite challenging, as they’re placed around tight corners or over tricky jumps.

The variance of these different modes throughout the single-player “missions”, as well as being able to complete them in a non-linear order, ensures you won’t have to do the same thing too often.

The battle races are the main attraction, offering a rather limited range of weapons to slow your opponents down, many of which are basically reskinned Mario Kart items – oil slicks act like banana peels, missiles act like koopa shells, etc. But the minimal variety of weapons, and their stock-standard appearance, is disappointing. And because there is no HUD indicator for weapons you pick up, it’s often unclear which one you have. They are represented on the player’s car model, in the form of guns poking out from the sides, or a mine stuck to the back. In theory it’s a good idea, as it potentially clears up a cluttered HUD, but in practice it’s often difficult to differentiate the weapons.

The selection of characters may seem rather generous at first glance, with plenty more to be unlocked as you progress, but as far as they handle, it makes little difference. In the character selection screen a slider shows each character’s speed/power ratio, but the majority of characters lie in the middle ground, and the differences between them are minimal. When a car does feel different, it’s far too pronounced – Mater, being most of the way to the power end of the scale, handles like a heavy shopping cart with its brakes stuck on. There is really no need to choose power over speed, even in more combat-oriented modes.

Multiplayer is a given in a game like this, so many might lament the lack of online multiplayer. To me it had little impact: I prefer same room, split-screen multiplayer in a game like this, and that front is covered well. In Free Play mode, up to four players can play any of the modes unlocked through the main campaign, and it is decently fun. A second player can also join in on the main campaign, providing a second chance to get the gold each time and progress. 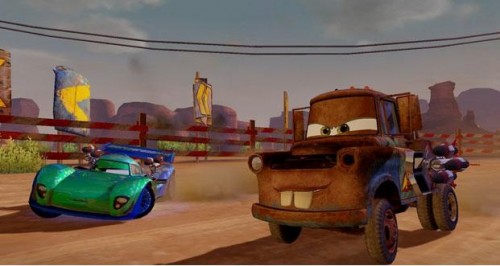 The environments are cartoony and attractive, especially if you’re used to the fairly plain look of realistic racers. Based on cities around the world, each track exaggerates the key characteristics of each location and boils them down into a caricature of that city, a cartoony postcard.

The characters are faithful to the film, with the eyes particularly expressive. This may simply be because they take up the entire windscreen, but regardless, it helps personify the cars. The smug look while driving backwards and the panicky look when bumped are particular favourites of mine.

The team could have gotten away with lazy animations, as the bodies are quite rigid, being cars and all, yet more personality is injected into each by allowing the chassis to twist and bend in a cartoony fashion, which most driving games wouldn’t bother with.

It’s also good to note that the original voice cast is presented and accounted for.

The major sticking point for me was the HUD and the menus. I had a lot of trouble figuring out what information the HUD was giving me: there was a lot to take in, and what was provided was unclear. In a time when driving and racing games have realised that minimalist HUDs are a player’s best friend, this feels particularly jarring. Usually, the information provided is filtered down to the bare essentials, and this is often presented near or on the car itself, so players don’t have to take their eyes off the road.

The HUD in Cars 2 is like having a backseat full of people screaming every detail of the vehicle’s state at you. There is way too much information, so finding what you need to know quickly is nigh on impossible. And what is presented doesn’t help. I never figured out what the indicators in the bottom-right of the screen meant. There’s too much, it’s unclear and too small to make out at a glance, especially in split-screen.

But the worst offender is the ranking indicators. In the top left of the screen, images of three racers are stacked vertically. I thought for a long time that the car shown at the top was in first place, and kept wondering why it wasn’t changing when I overtook others or was overtaken. Eventually I figured out that the small numbers next to each image indicated their placing in the race. So I could be in first place, with a one next to my image, but still be the second or third image down. My question is – what the hell do those images mean then?! Again, I never figured that out. A picture of the car in first place works well at a glance to tell your place in the race. But this fairly vital information is instead communicated via a tiny number next to that. And whatever is conveyed through those images is obviously unnecessary, as I proceeded fine without ever knowing their purpose. 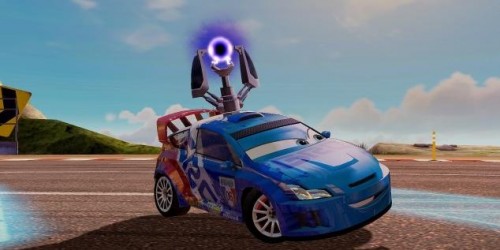 While most will probably avoid this game based solely on the assumption that licensed games suck, I would recommend it if you’re looking for a Mario Kart-esque experience. There’s some definite fun to be had in this surprisingly strategic racing game, and despite its flaws, the unique character abilities and game modes inject it with enough individuality to make it stand out as a competent, quirky racer.