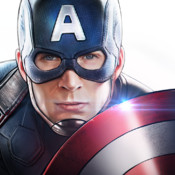 The mobile platform is by far the best place for film tie-in games. It allows developers to do something a little bit different without breaking the bank, and offers the perfect opportunity to tease fans with enough content to make them want to watch the movie. Captain America: The Winter Soldier – The Official Game ticks all of these boxes quite nicely. It is a brawler that implements elements of tactical combat and wraps them in a very comic book-esq wrapping. It has its faults, but is still an enjoyable experience and definitely one to keep on your radar if you are a fan of the character. 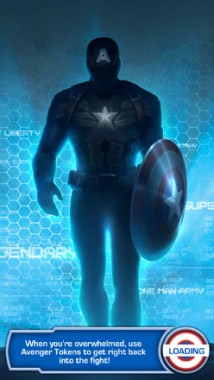 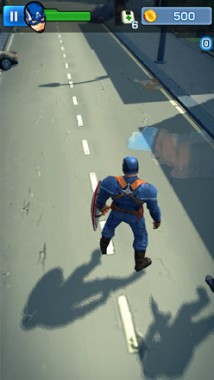 When a bunch of evil villains decide to wreck havoc on a massive scale, Steve Rogers steps up to the plate and vows to take them down. Working alongside S.H.I.E.L.D. for the betterment of mankind, Captain America’s Idealistic ways are challenged when he comes face to face with an adversary unlike any he has encountered before – The Winter Soldier.

The story has little to do with the actual film, so you don’t need to worry about spoiling yourself if you haven’t seen it yet. It manages to take some iconic Cap villains and shows you how they might look and act if they were in the Marvel Cinematic Universe, and the game features some characters that are first introduced in The Winter Soldier (like The Winter Soldier and Falcon). 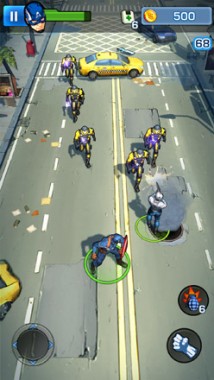 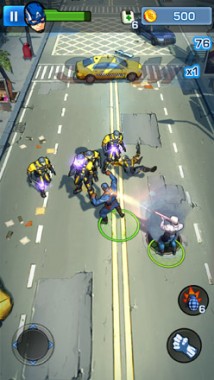 One of the few games in recent memory where you hold your phone vertical to play. Captain America has you controlling the titular character (who’d of thought) while he bashes his way through waves of H.Y.D.R.A. soldiers on his quest to save the world. Cap’s powers are a little awkward for a video game, as he doesn’t have anything flashy or visually impressive aside from his shield throw. Most of the game will be spent with you punching enemies in typical brawler fashion. You can throw Cap’s shield around by drawing its trajectory on the screen, but enemies that are shielded can deflect it away, leaving you without your ranged weapon for a short time.

There are two control schemes in the game, and both are available from the get-go. You can either tap where you want cap to move, and should he come into contact with an enemy in the meantime; the fight is on. If that is not your style, there are also virtual control sticks and buttons for you to play along with. I found the latter control scheme to be awkward at best – not because of the control pad itself (which worked flawlessly), but because you hold your device vertically, if you are playing on a phone then your hands are quite close together. It might just be me, but I felt like I should have been typing a text message to someone from the way the phone was held.

Cap isn’t the only member of your team through this adventure, as you will be joined by up to two S.H.I.E.L.D. operatives through your missions. Part of the game is to pick which type of operative will be best for the upcoming mission. Do you want a long-range sniper or a close up gunner? The type you choose can heavily impact how easy or difficult a mission is. This is especially pertinent during the later stages of the game where the difficulty has jumped up a notch or two. In addition, you are able to call in Black Widow or Falcon if the battle gets too hairy, and they can provide the kind of screen-clearing result that is typically saved for a special move. 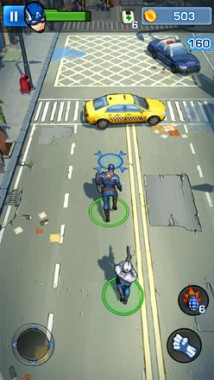 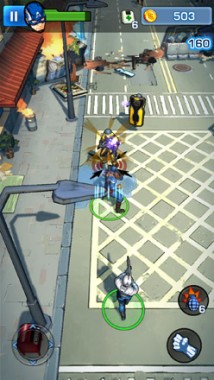 Visually, this game looks like it is ripped straight from the pages of a comic book. While it doesn’t have the highest polygon count or high-res textures, it has a lot of charm and everything from the characters on screen to the special effects during combat all look great.

Combat is accented with large colourful explosions and giant words flashing across the screen. The developers have taken inspiration from comics both old and new to create this look, and as someone who grew up on comic books, seeing a large “FWOOM” flash across the screen when I fell an enemy is a great addition.

The game’s audio probably isn’t up to scratch with its visuals, as most of the sounds you will hear are Captain America’s hand hitting an enemy or a gunshot going off from one of your troop members. The actual verbal dialogue in the game is short and repetitive. It is unfortunate, because Roger Craig Smith (reprising his roll of Captain America from the  Marvel’s Avengers Assemble tv series) has an almost perfect voice for Steve Rogers. 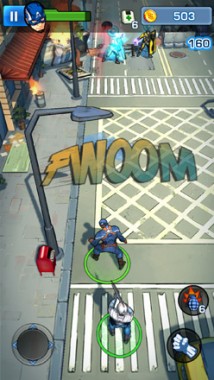 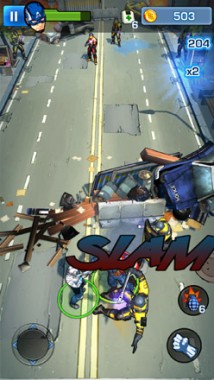 I am always a big fan of Gameloft’s movie tie-ins. They all feature massive production values and make the best use of the license without ever spoiling the films they are based on. Not only that, but every one of their games actually feels fresh and different. Unfortunately they also have this habit of really pointing us in the directions of their microtransactions and in-app purchases, which unfortunately are rampant here. This isn’t pay to win I still felt like I was being told “no seriously, buy this upgrade.” While Captain America: The Winter Soldier – The Official Game is not a perfect experience, it is still really fun to pick up and play, and fans of Steve Rogers or Marvel Comics would be amiss to not at least try it out.