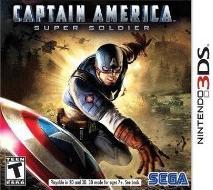 Overview
Captain America hit both theaters and consoles alike earlier this year. I thoroughly enjoyed my time with the Xbox 360 version of the game, as it went for a more “Arkham Asylum” approach and benefited greatly by doing so. Now months later, yet another version of Super Soldier has hit store shelves for the Nintendo 3DS. Crafted by the same team that worked on the Conduit series, this version sets out to bring our beloved Captain into 3D while keeping that fast and fluid gameplay. The question is, does this Captain aim his sheild above his console kin, or fall powerless like many of the other licensed titles the 3DS has seen so far? Here is my review for Captain America: Super Soldier on the Nintendo 3DS. 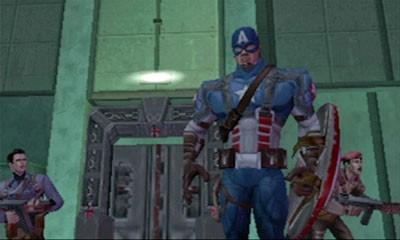 Story
Much like all other versions released thus far, Captain America: Super Soldier’s plot loosely ties into the cinematic adaptation. Players take the role of Steve Rogers and must set out to stop the terrorist group known as the HYDRA from building dangerous weapons of mass destruction by infiltrating their secret hide-out. It’s a rather simplistic plot, but is actually quite easy to follow this time around due to the many cutscenes that play throughout each level.

I really have to give some recognition to High Voltage for their efforts here, as it’s obvious they did attempt to make this plot satisfying and true to the Marvel hero’s legacy. With that said though, I felt that the narrative as a whole was a tad generic. Sure, you will want to progress to see what happens next, but the game never truly sucks you in and makes you feel like Captain America as his persona is so bland that many will feel like they could easily complete the game as some random avatar instead. Yes, you are Steve Rogers and the game definitely lets you know that during cutscenes, but the dialogue provided gives little to make the player truly care about this hero’s motives. However, hardcore Marvel fans will probably not have much of a problem with this as fan service is still pushed throughout the game, which redeems some of the Captain’s personal shortcomings.

Gameplay
This game plays about like the other versions with a mixture of combat and puzzle solving. Using the highly responsive control stick to move Captain America, players must go from one area to the next and complete a list of objectives to finish off a stage. Most of these tasks include the likes of taking out all the HYDRA goons, unlocking doors by hitting generators, or destroying certain targets scattered throughout the castle. The “puzzles” I spoke of usually revolve around using your shield to smash switches in a certain succession or guide lasers to blow up generators, which in turn opens up the next location and keeps you progressing along. These methods work fine within the general flow of the game, but never offer enough variation to provide any challenge due to how often the same kind of puzzles are used. 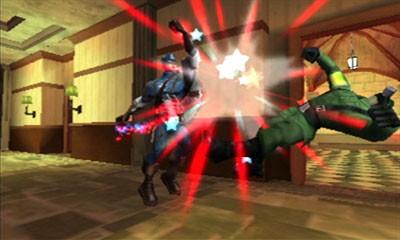 The shining feature in Super Soldier is the hand-to-hand combat. Most of the time, you will come face to face with many armed enemies and must use your own athleticism and fighting skills to defeat everyone around you. Using the standard face buttons, it’s pretty much the button-mashing beat-em up fare you would expect. Even though the control rarely changes, Captain America still has quite a few techniques in his arsenal and can perform a satisfying final blow to finish off an opponent or toss lightweight goons across a room. To add a bit of depth to this system, the block button counters any enemy attack instantly while delivering a new form of offense, much like Arkham Asylum. This countering system works to near perfection as many times I found myself just executing counters and still ending a fight victorious once the battle was all said and done. 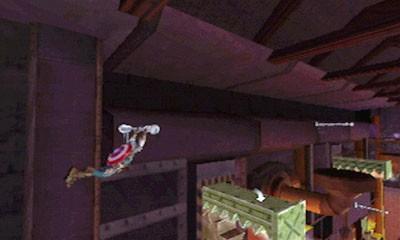 With such a well built, fluid combat system in place, I expected even more for the platforming sections of the game. Sadly, platforming is literally done for the player as even jumping up to a small beam is a pre-set affair. When you come to a heavy platforming section, simply hitting the jump button at the appropriate time will launch the Captain to his destination. Yeah, it usually works without error, but having the player manually perform this form of parkour would have given a greater sense of control and made for a richer experience as a whole. 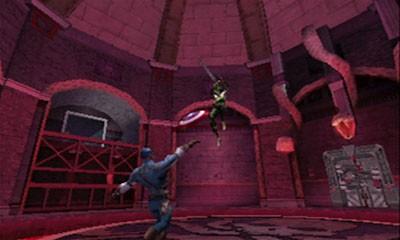 The shield in this game is in a category all to itself. Captain America’s shield can be launched at anytime to hit any foe that blocks your path. This is done in a quick fashion and would be useful, but most of the time the shield just stuns even the weakest of foes. At one point I had to hit a goon six times before he finally fell. A stun attack is fine, but considering that this is Steve Roger’s definitive weapon, the lack of damage it leaves it as being one of the most useless techniques in the game. There is however a clever mechanic where you can lock on to several enemies at once and launch the shield to ricochet around the room and due to the leveling system in place, more substantial attacks can be unlocked over time, which do add to the incentive to use the shield later on. High Voltage also offered up a bit of innovation with this attack, as players hold the L button and use the shield icon on the touchscreen to deliver a more accurate throw. This would have worked fine, but the reticule at times has a mind of it’s own and makes what should be an easy lock-on an absolute chore. When the player has to stand on a switch and use this touch-screen mechanic to hit a generator, the camera often goes crazy and you will then have to completely set up the shot all over again. I appreciate the idea behind this gimmick, but when you go from fast-paced combat to jerking around a reticule, you completely lose any immersion you had in the game due to the tedious mechanics provided.

For completionists, there are non-mandatory challenges that offer new objectives to be performed at will, which in turn open up art and other goodies at the main menu. Save every prisoner, complete every task, you know the drill. It’s not a whole lot of reason to go back in, but whats offered can certainly add a bit more life into the six hours found in the main campaign.

Visuals/Audio
When it comes to the 3D effect Captain America offers, most will be a bit disappointed as everything is rather subtle and I eventually played the game through it’s entirety with the slider off. The 3D isn’t bad by any means, there just isn’t any factors that make it feel truly necessary. Graphically however, the models are well made. Steve Rogers does appear a bit dis-proportioned, but I forgave that as this version seems to be going for a more cartoony look. Environments however do not mesh well with the models as they are dark and bland for the most part. Even though the game is set in a castle, not much detail can be found in any of the textures which in turn makes exploration a bit un-fulfilling. Animations also miss their mark, with Captain America performing awkward yet hilarious gestures while crossing beams or galloping about the stage. 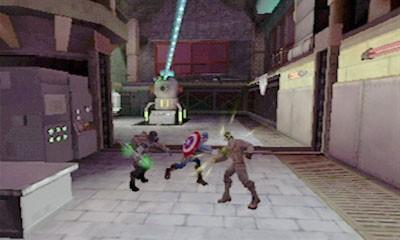 As far as the audio goes, there isn’t a whole lot to say. The voice actors do a decent job in bringing out some personality to their roles, but Steve Roger’s own emotions just sound mildly generic at best. I can say that the sound effects used while pulverizing the hydra were well done and make battles feel nice and satisfying, even though the shield’s famous “whoosh” was only a minor “whisp”. Soundtrack wise, Super Soldier plays a few forgettable tracks that blend well with the pacing of the game and in turn makes everything feel like a true “Marvel” romp.

Overall
Captain America: Super Soldier is a solid licensed title that has a lot of great ideas, but never can quite execute them properly. It’s a lot of fun just to bash HYDRA goons though, and the combat system is both polished and easily accessible. With that said though, the rest of the game feels average and the in-game world doesn’t do much to keep players immersed in the iconic role of the star-spangled hero. Hardcore fans of the Marvel great are sure to find reason to pick up this portable version due to the fan service packed in, but others looking for a more enjoyable and deep action experience will more than likely want to pass on snagging up this shield.