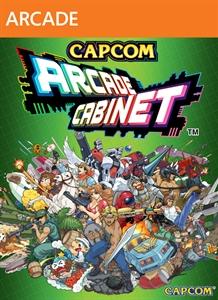 Overview
If you say the word Capcom, you are more than likely going to get one of two reactions. The first will be from the latter half of the fanbase who remain bitter due to the DLC controversy and cancellation of two Mega Man games. The second however is where I stand, as a kid from the 90’s who grew up pouring quarters in machines. Whether it is Street Fighter, Ghosts and Goblins, or any other classic, Capcom made a name for themselves with their famed arcade machines and over the years, they have let us know it with countless compilations.  Capcom Arcade Cabinet is the latest, featuring a hefty number of retro favorites that are to be dripped out as this year moves along. The first pack is none features Black Tiger, 1943, and Avengers. Does this compilation set itself apart, or is just another release that is sure to provoke anger from a once loyal fanbase?

Gameplay
Even though this is a review of the three titles that come in the first pack for Arcade Cabinet, that is not going to be the focus. We know these games are good as they have stood the test of time, again and again, inspiring tournaments and retro themed gatherings that bring gamers together all over the world. Sure, we’ll touch on gameplay in a moment in terms of controls, but the main reason to buy this pack and Capcom Arcade Cabinet can be found in the bonuses that come attached. 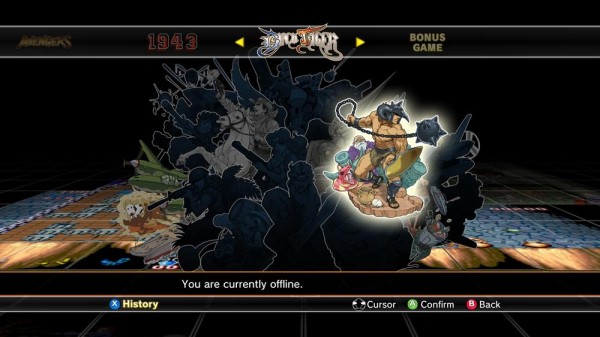 Each game comes fully featured with a ton of extras players can access right off the bat. A good portion of the time, I hear a lot of gamers complain that arcade games are too difficult – which is mainly because they were designed around quarter intake. Luckily, Capcom have thought of those poor modern souls and have allotted the player with an unlimited amount of continues, along with a casual mode that makes any trek through a game a breeze. Also included is a score attack mode for competitive players that include leaderboards, as well as a training session that allows players to go back and familiarize themselves with the dangers each stage possesses. Now, considering we have seen a lot of these features included in Sega’s Vintage Collection, it may not sound too exciting to get a few extra modes with an arcade game. With that said, I can easily state that these modes do matter, as in addition to the arcade perfect ports – players who grew up playing these titles in the past will have a lot more than nostalgia to go back to this time around. 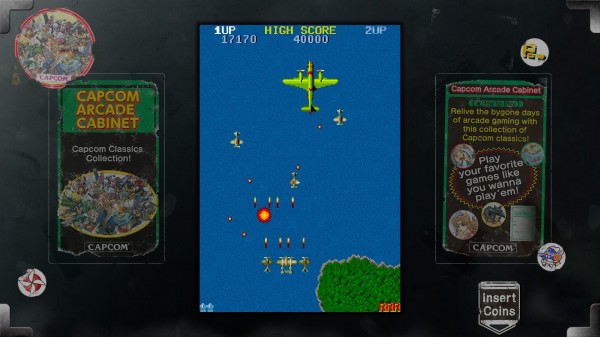 When it comes to controls – as mentioned, these three titles do indeed live up to their arcade counterparts. 1943 has the player take control of a P-38 Lightning during World War II. Like any shooter, the controls are simplified to dodging enemy fire and moving up and down with the control stick, while firing one of two attacks with the face buttons. Avengers is a bit slower, even for it’s genre. This top-down beat-em up is all about punching and kicking baddies in-between boss fights, and while it was my least favorite of the three in this pack, I must say I still found a lot to respect in the tight controls. Finally, Black Tiger is about as deep as you can get when it comes to arcade favorites, featuring a Ghosts ‘n Goblins styled layout (it was the spiritual successor after all), along with a early equipment upgrading system that allows the player to get stronger as the progress and collect loot. Sure, it’s fun to play these three on their own, but with the bonuses attached and new achievements, I found myself spending hours going through each title. 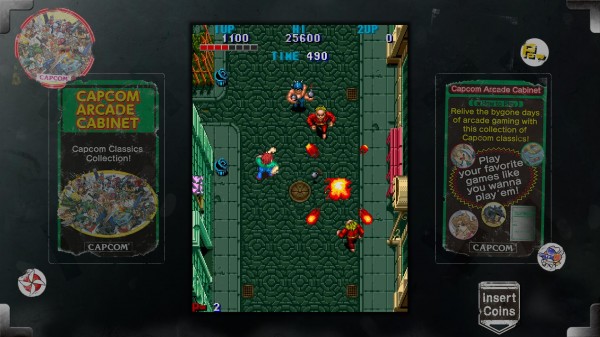 Depending how the player scores, pictures and concept art can be awarded in each game’s gallery. That in itself is quite a treat, but also up for grabs is themed wallpapers that ditch the arcade styled backdrop in favor of scenery more relevant to your current title. Sure, it isn’t too much of an unlockable, but for three titles that have disappeared from the gaming scene for years – I’ll take it. Those looking for even more reason to play will be happy to know that all titles involved will also feature a multiplayer mode – for both local and couch co-op.

Visuals and Audio
As far as graphics and even animation goes, most going in to this arcade cabinet are going to know what to expect. Pixelated greatness of the past can be found all over this collection – during the games themselves as well as the menus and extra features. Sure, each show their age to a degree, with the most prominent example being Avengers’ frequent moments of slowdown, but I kind of appreciate all of that as back then we didn’t worry about visuals, it was all about tackling that high score. I will say though that seeing the half peeled stickers, posted all over the front of the arcade machines in this game is one small touch that goes a long way to take us back. 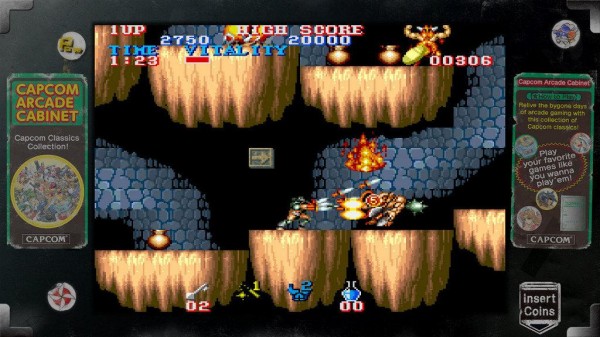 As far as audio goes, things have remained the same. That of course is a good thing, as who doesn’t love hearing the scratchy screams of an antagonist or the “pew pew boom” as they blow up an enemies ship? Yes, Capcom have improved these three titles for current hardware, but have done so in a way to keep each sounding true to their namesake – meaning all of those 8-bit tunes from the days of slurpees and cheap pizza are available to fill your ears with nostalgic bliss.

Overall
For every arcade or “retro” compilation that comes out, there are a handful of modern gamers that get infected with the same feelings we did years ago while we dumped quarters into old machines. Sega have perfected the art of ports this generation with their digital offerings, while other misses like “Game Room” have left us rather sad about the missed potential of an otherwise great idea. Capcom has something here with the Arcade Cabinet line however, as the extra features and love packed in alone makes for one entertaining and nostalgic joyride filled with promise as the other add-ons near in release. If you are a 80’s or 90’s kid – or just someone with a love of the classics, Capcom Arcade Cabinet is one of the finest offerings you can find on the digital scene and yet another reason to remember why Capcom’s legacy is worth fighting for.