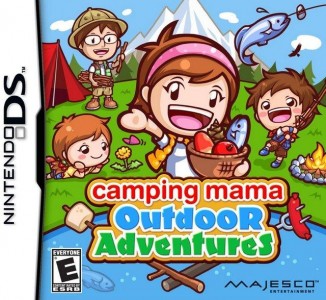 Over the past 5 years, we have assisted Mama in cooking, crafting, gardening, and babysitting. All that work though calls for a bit of a vacation and gaming’s #1 mother is now ready to take the whole family camping in Camping Mama: Outdoor Adventures. While this title still thrives on participating in mini-games to complete tasks, it also changes things up with a bit as players can take control of one of Mama’s children and explore each campsite. So how does Mama’s trek to the great outdoors add up? Here is my review for Camping Mama: Outdoor Adventures. 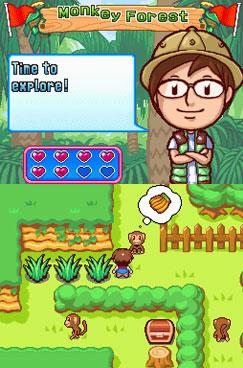 Gameplay
Aside from the whole “camping” premise, there really isn’t a plot to follow within Outdoor Adventures. Instead, the player must take the role as Mama’s child and perform certain chores to make this trip a delightful one for the whole family. The campsite Mama chose is quite a large one and is made up of several different locations such as a forest, a beach, and a mountainous area for the player to explore, with each location broken down into a set number of stages.

I would really say that this entry in the series plays out as two halves throughout the entire game. A good portion of the time, the player must use the touchscreen (or D-Pad) to control their kid and “find” Mama or Papa within each stage in order to progress. Luckily, these touchscreen controls are responsive and the top-down view makes it easy to explore. Your kid is also equipped with 8 hearts for an HP bar of sorts, as there are enemies such as crabs, monkeys, and other outdoor creatures that can cause a bit of damage when crossed. These foes play a much larger role in the “exploration” part of the game though, as they make worthy obstacles for fetch quests. 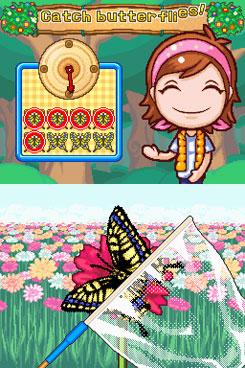 At times, players will have to perform tasks such as feeding animals that block paths or collecting a set number of items for Mama or Papa. To do this, you must ensure no wild animals touch you as your load will drop to the ground and the whole process will then have to be repeated. This was one of the only true frustrations I had with Camping Mama, as the kid you play as is not very speedy and is very prone to getting hit by the many creatures within the game. I think part of this was also my impatience for the mechanic though, as I later learned that each animal’s walking pattern was meant to be studied so players can safely travel through using proper timing. It’s a lot smarter of a scheme than it appears to be, but I still found it to be one of the least enjoyable elements within the entire experience.

If anyone has every played a Mama title, they should definitely know about the vast amount of mini-games that are packed inside. Camping Mama is no different, as there are over 100 to complete in all that each have their own distinct feel and format. To access one of these mini-games, the player must trigger an event within each stage such as running into an animal, reading a sign, or by simply finding a parent. Some of these mini-games revolve around cooking, while others have the player interact with the many animals found throughout the environment. Due to the mass variety, I could literally ramble on all day about every game that can be found, but to shorten things a bit, we’ll just go over a few for now. 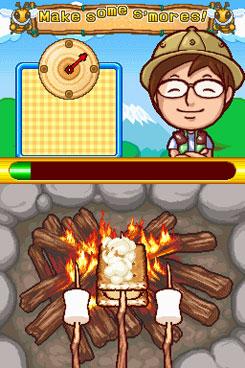 The cooking games usually consist of the player having to slice, prepare, and cook foods on the touchscreen. Now I won’t go into too much detail about these moments as if you played any Cooking Mama title, you should know what to expect as the same kind of mechanics are utilized here. Taking a page out of Crafting Mama’s book, some activities will have the player craft an item from the many elements found in the wilderness. If the player has to make a slingshot for example, they must cut their stick, slice through leather, and then attach the elastic band in a multi-part game. The other mini-games have you mix it up with the animals and outdoor environment as well, with the likes of tossing bananas to hungry monkeys, tracing a picture in sand before a wave washes everything away, and dodging enemy boars in a jumping challenge. While some of these can be a bit dull, I enjoyed well over half of what I played as Camping Mama makes each mini-game easy to pick up and play while giving fans of the series some new elements to toy around with.

Even after you complete the 36 stages, there still is quite a lot left to do thanks to the many collectibles scattered about the campsite. Completionists are sure to love all of the hidden badges and items thrown in as well, as these alone give a ton of incentive to revisit past locations. A challenge mode is also available, letting campers replay mini-games to best their star ranking. With all of the mini-games, exploration segments, and content added in, I can easily say this very well may be the largest and most fulfilling Mama game to date.

Graphics/Audio
If you enjoy crisp and colorful visuals oozing with that classic “Mama” charm, you will be in paradise on this camping trip. Mama and Papa still look about the same, so not much can be said on their character designs, but the animals and varied environments come together perfectly create an upbeat and jolly atmosphere. I did find some of the design choices a bit odd and unfitting at times though with the likes of penguins waddling around in a sunny and green landscape though, but even with that, most should have no problem wanting to give the new exploration segments a full run-through. Animations are also delightful as Mama still has her same flaming eyes and seizure like shaking to scare younger players into giving it their all for each activity. 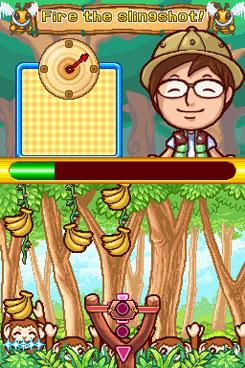 Over the years, I have always wondered why Mama is voiced by someone who sounds as if they just learned the English language, but I think I have now accepted it as just another trademark that makes her character so endearing. Honestly though, who doesn’t love to hear “Even Better than Mama!” after successfully completing a mini-game? The little boy in the game isn’t given the same detail with dialogue, as he mainly just squeals “OUCH!” when in pain. As far as music goes, nothing is too memorable, but I can say that the melodies provided did a decent enough job at complimenting the new outdoor locales and are sure to make any younger player enjoy the experience until the very end.

Overall
Camping Mama: Outdoor Adventures delivers the same charms and solid gameplay that the Mama loyal should expect while introducing new elements that keep the overall experience fresh. There are a few moments of frustration with the new exploration mechanic, but most will easily look past these flaws and immerse themselves in all of the mini-games that truly capture that outdoor theme. I know some cast off this series as a whole due to it’s casual nature, but you can’t deny that the franchise’s ability to branch out has kept Mama as one of the most prominent video-game personas of this generation and this title just adds to that already impressive resume. So pack up those sleeping bags and get ready to gather around the fire, as Mama’s latest outdoor outing is well worth the trip and free of any pesky misquitos.

I Give Camping Mama: Outdoor Adventures: