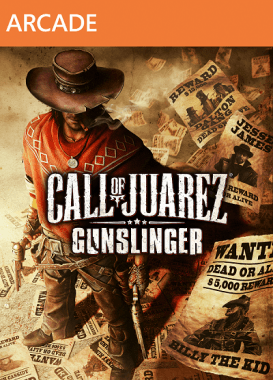 Gunslinger is the fourth title in the Call of Juarez series from Polish developer Techland (Dead Island). Critically, it became popular opinion that the series lost its way with the sub-par Call of Juarez: The Cartel in 2011, but now Techland are re-focusing the franchise with this downloadable entry. Has the more compact game model forced the team to funnel their creativity and that focus? Or is Gunslinger just not quick enough on the draw?

It’s 1910 in Abilene, Kansas, when a man walks into Bull’s Head Tavern, claiming to be the legendary Silas Greaves. The present group of customers and employees of the establishment, including bar wench Molly and owner/bartender Ben, gather around as the man regales them all with his recollection of numerous, infamous events that have taken place and spread as gospel throughout the years. Only, his versions of the stories may not quite match up with the word-of-mouth the others have heard. Over time, the group grow more and more doubtful of the validity of the man’s words. They wonder; is he really Silas Greaves, or is he some drunk who wants some free drinks?

Among his adventures, the man tells of encounters with other legends of the Wild West like Pat Garrett, Old Man Clanton (“cranky…cantankerous…mean as hell!”), John Wesley Hardin, the Dalton Brothers, Butch Cassidy and the Sundance Kid and the most famous outlaw of all, Jesse James, among many others. He claimed to ride with Billy the Kid before getting locked up together in Lincoln County and used as bait by the latter as he escaped. Throughout his journeys, however, there was a driving force…a common thread that led him across the country; the quest for revenge on Johnny Ringo, Jim Reed and Roscoe “Bob” Bryant, a trio who hanged Silas and his brothers years earlier over a lost poker game. He survived, they didn’t. 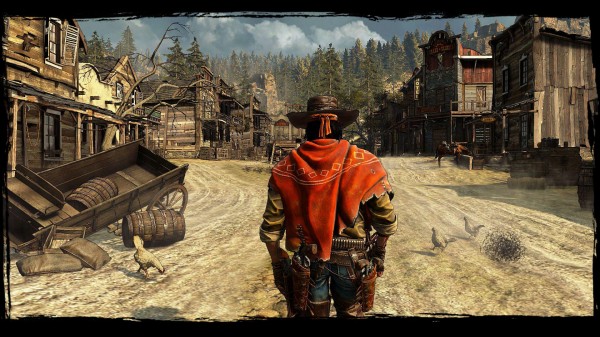 The player experiences every memory as narrated by Silas in the saloon in present day. The plot is disjointed as Silas sometimes indulges his listeners by telling the myth first, and then explaining how it truly happened; some segments are even completely out of order. At one point, different versions of the Dalton Brothers’ bank robbery were told by the patrons of the saloon before Silas sets them straight on the truth. Humorously there’s a moment where he takes a break to go the bathroom; the gameplay continues, but the other characters are overheard talking behind his back over the unbelievable aspects of the life he is painting. It’s a real homage to the era and the myths that were born and perpetuated back then.

Being called Gunslinger, there’s a certain expectation for the gun-play to be of a high standard. Thankfully, it is very fun and satisfying, although not quite as diverse as it could have been. There are four weapon slots in your arsenal, which can be accessed from the D-Pad; Shotguns/Rifles, Pistols (includes the sawn-off), Dual-Wield and Dynamite. There are few variations in the weapons, with all of one type essentially feeling and acting almost exactly the same. I found myself consistently gravitating towards dual-wielding my in-laid 6-shooters and utilising the rifle when shooting from a distance. Shotguns weren’t as powerful as I’d hope and, given they can only hold 2-4 rounds in a chamber, they’re not very effective when fighting a swarm of enemies (especially on hard difficulty). 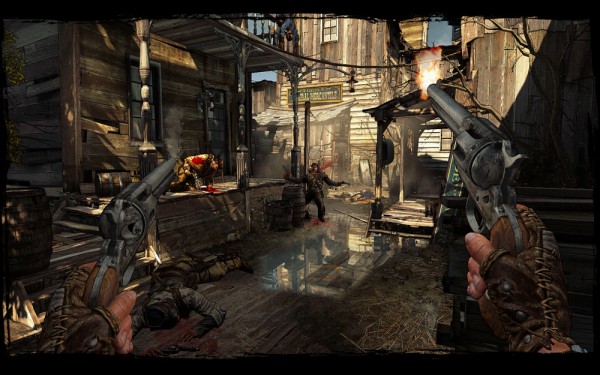 That being said, players can upgrade their different weapons to suit a particular play style with the skill tree, which is broken up into Ranger, Trapper, Gunslinger. An XP system is put into place that will grant you skill points to be assigned for every level you advance. Reload speed, ammo count and other properties can be improved. Two that I found most helpful were the abilities to split dynamite after throwing it and “smash” reload – the “Quick Fingers” skill in the ranger tree that allows you to mash ‘X’ in order to reload faster.

You can also boost/enhance your Concentration meter, which – when full – slows down time and identifies enemies in red for easy targeting. The meter refills with every kill you make and can be used by pressing ‘RB’. Another mechanic that refills, but requires only time to do so, is the Sense of Death. When you are badly hurt, tt activates automatically if a killing shot is fired at you, giving you a second (even less as the game progresses) to dodge the bullet by leaning either right or left depending on its trajectory. This can definitely come in handy when playing on the higher difficulties. 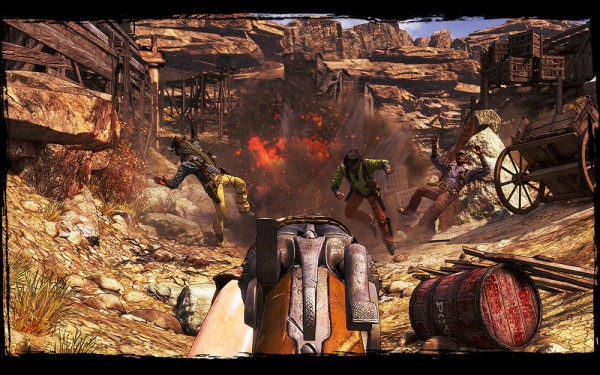 Aside from the obligatory explosive barrels lying around (always safe!), there will be a few instances where you come across a mounted gatling gun, which you can utilise to clear the area and provides a few moments of absolute bad-assery (I know that’s not a word…). There are a couple different enemy types that come into play and provide unique challenges, such as the “shotgunners” who do heavy damage and have a larger health bar, and the shielders who carry a massive wooden shield with a convenient slit for you to shoot them through…or you can just waste them with a stick of dynamite.

At the climax of each level there will either be a sub-boss battle or duel. The sub-boss battles require varying strategies to overcome and beat. For instance, Henry Plumber loves his dynamite and will lob generous bundles at you front a walkway at a higher point. There are pockets of cover, but the dynamite will flush you out. You must avoid them whilst tracking him as he also moves between cover and calls his goons to aid him, distracting you with their own onslaught. If you have lightning fast reflexes and optimal positioning, you can even shoot the dynamite in mid-air after it leaves his hand, which will damage him if close enough. 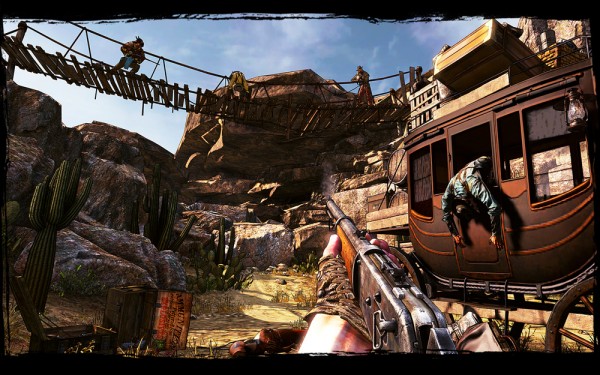 Finally there are the duels: a hallmark of the series and the Western genre in general. Here, you must concentrate a reticle on the opponent with the right analog stick, whilst also keeping your gun hand in the sweet spot using the left. Being accurate in doing so will raise your Focus and Speed respectively. Once you begin to hear your own heartbeat, it’s time; you can shoot first, although it will be classed as dishonourable and you won’t receive the usual XP. Either way, once the shoot-out begins, you can dodge left or right and continue to adjust your aim simultaneously. If you run out of bullets (no one is that bad!), that’s your death sentence right there. The Duels are also available as a separate gauntlet mode where you run through 15 in a row, with 5 extra lives, attempting to get the best score.

Along with your Duels score, the Leaderboards also track your Arcade scores. Arcade mode gives you the option of three classes – expertises in each gun type – and asks you to clear an area from the story mode as quickly and efficiently as possible, with a 3-star rating system attached. These extra modes add a lot of replay-ability to the proceedings, as do the 54 “Nuggets of Truth” hidden throughout the campaign, which give back-stories to every character, event and location in the game’s history. If you missed a few in your play-through, you can always tackle each chapter individually or restart on True West difficulty (harder with minimal HUD) in New Game+, where your skills carry over from your complete campaign.

Gunslinger has a painted, cel-shaded look to it that extends further into motion-comic territory in the cut-scenes between levels. When I first started the game, I did not recognise the moment control was given to me as the player because there was a black, paint-brushed border around the screen which I then discovered was a constant artistic flair. When Silas loses track or gets interrupted in his telling of the story, the screen bleeds into sepia tones. And when new characters are introduced (mostly the boss-type enemies like Kid Curry), they are done so in vertical, comic-strip style panels. Overall, the game has a great aesthetic. 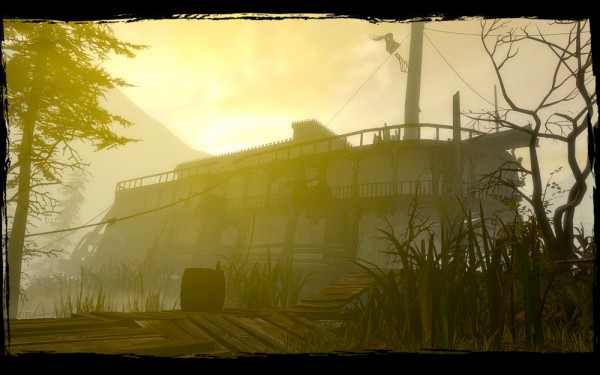 Oh, and just because of those facts, don’t think that the game is censored in any way when it comes to blood; kills are still graphically impactful. The music throughout is vintage Wild West action-based, while the dialogue in Gunslinger carries that iconic Western way of speaking, full of cowboy slang, as I call it and the voice acting is phenomenal all around. At one point, Silas Greaves treks into “the mountains. Mountains so high they tickled the nether regions of Heaven” – a perfect example of the iconic phraseology we’ve associated with the Wild West since the dawn of the Western genre in cinema.

The self-narration of the tales of Silas Greaves recalls those classic films, which would many times frame the narrative on-screen as a re-telling, or at least reference the spread of the legend. I found that whenever you pause the game after a line of dialogue has started to play, that sentence or two does not pause with it, instead continuing to play out. Also, in relation to the sound effects – which include the classic, exaggerating pings of metal objects being struck and the whizzing of a passing bullet – the reload sound cuts out when “smashing” your ammo in rifles and shotguns..

Call of Juarez: Gunslinger captures the air and tone of the Wild West perfectly with Techland creating a new legend in Silas Greaves. The fragmented story-telling may annoy some people, who could feel like it constantly pushes and pulls them back and forth, in and out of flow, but thematically it’s brilliant; the cloudy memories of a now old man. Gameplay could have done with some more variation, possibly in the weapons department as I found myself using the same two weapons for much of the campaign. But Gunslinger is a lot of fun regardless, with solid mechanics, entertaining characterisations and duels that actually take concentration. For less than $20, Ubisoft have another digital winner on their hands.