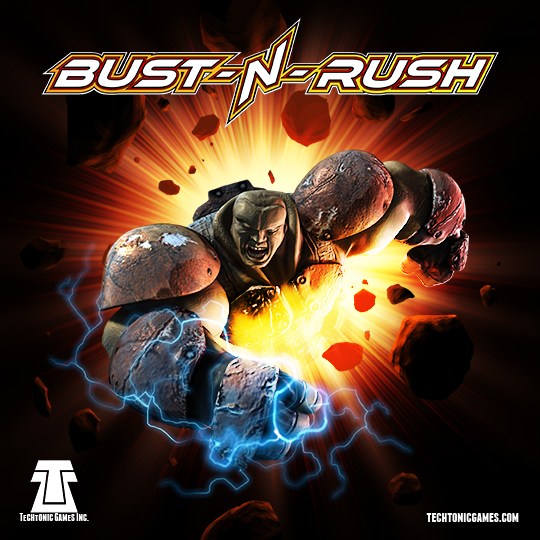 Overview
Bust-n-Rush is the first game from Santa Barbara studio Techtonic Games. The first game. And for that, it is seriously impressive. At the most basic level all you have to do is run and smash into stuff, but Techtonic have managed to create something here that will test your reflexes, boggle your brain and please eyeballs and eardrums alike.

It uses the Unity engine to great effect, creating procedurally generated levels so that no two run throughs will ever be the same. Players take on the role of Kovo, and must ‘Bust ‘n Rush’ their way through 3 levels of ten challenges each – all in the name of a flamingo! (explained shortly) Also included is endless mode, which as the name implies, is a never ending run with the simple aim of getting the highest score possible.

Story:
Now a game like this isn’t ever going to be story heavy, but what confused me about Bust-n-Rush is this – there is a story, and it’s quite neat, but it’s for the most part hidden away on the developer’s website rather than in the game. The screenshot you see above is pretty much the entire story set up, and despite the fact it’s only one tiny scene, it’s a good one. It’s quirky and different, with the game’s hero Kovo chilling out in his underground haven, listening to some tunes with his pal the pink flamingo. 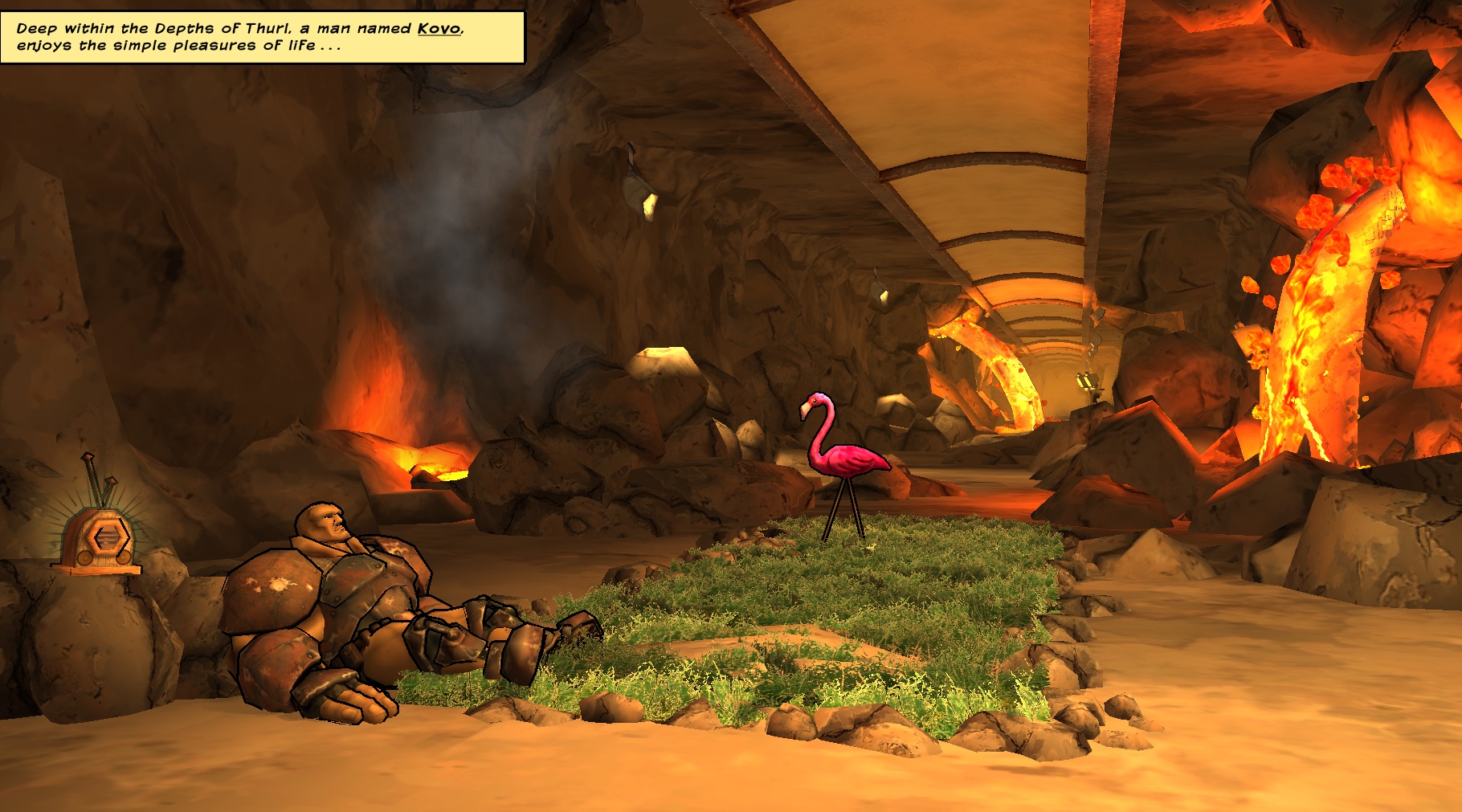 Seconds later a giant machine comes and decimates the area, squashing the flamingo and disturbing Kovo’s relaxation time. Understandably annoyed by this random act of destruction, he sets off to chase down the machine – making the entire driving force of the game one stone golems desire to avenge his squished flamingo . Thumbs up. But I only knew that the flamingo had anything to do with it by looking at Techtonic’s website, which reveals more details, including the fact the flamingo is called Paco and that the bad guy machine is actually something called the Satellite of Wub. Both made me chuckle, both were on the website. As I said, it doesn’t really detract from the game , but having a few more extra details of humor in there wouldn’t hurt.

All in all it has what it needs, a neat, funny, unique set up.

Gameplay:
Run. Run faster. Smash things. That in a nutshell, is Bust-n-Rush. What the nutshell doesn’t quite cover is how fast, crazy and difficult this game is. Kovo can only crash through objects outlined in blue, and then only when rushing. Red outlined objects will stop him in his tracks, as will falling off ledges, or hitting anything at normal speed. The game works on three tracks, allowing Kovo to switch between them to pick out the path of least (or most, depending on your mood) resistance.

It all starts off fairly easily, a few rocks here, a few rocks there. But then the challenges take a brutal step up in difficulty, throwing in score multiplier scorbs (see what they did there?) , super scorbs, tricky little rock arrangements, and so, many, obstacles! The second and third stages have a crazy amount of them – portals, gravity flippers, compactors, objects that force you to jump, power ups that speed you up, conveyor belts that go backwards, air vents, objects that force you into the ground, conveyor belts that go forwards, plain old lumps of metal, electrified metal, spikes of metal. All at high speed.

See how you’re brain felt when reading that list? Multiply that level of information processing by 100 and speed it up and add some bright colours and maybe some little sparkly lights, because that’s how your head will feel when playing this – it’s fast, it’s hard, and it can also be incredibly frustrating. Surviving for 60 seconds may not seem like a big deal, but in Bust-n-Rush that minute is full of tons of randomised obstacles flying at your face, moving side to side or up and down – finishing a challenge here can be a real accomplishment. It can also cause a rage quit. How you deal with Bust-n-Rush’s difficulty spike will really affect how you get on with this title, especially when the tiniest mistake can cost you everything. 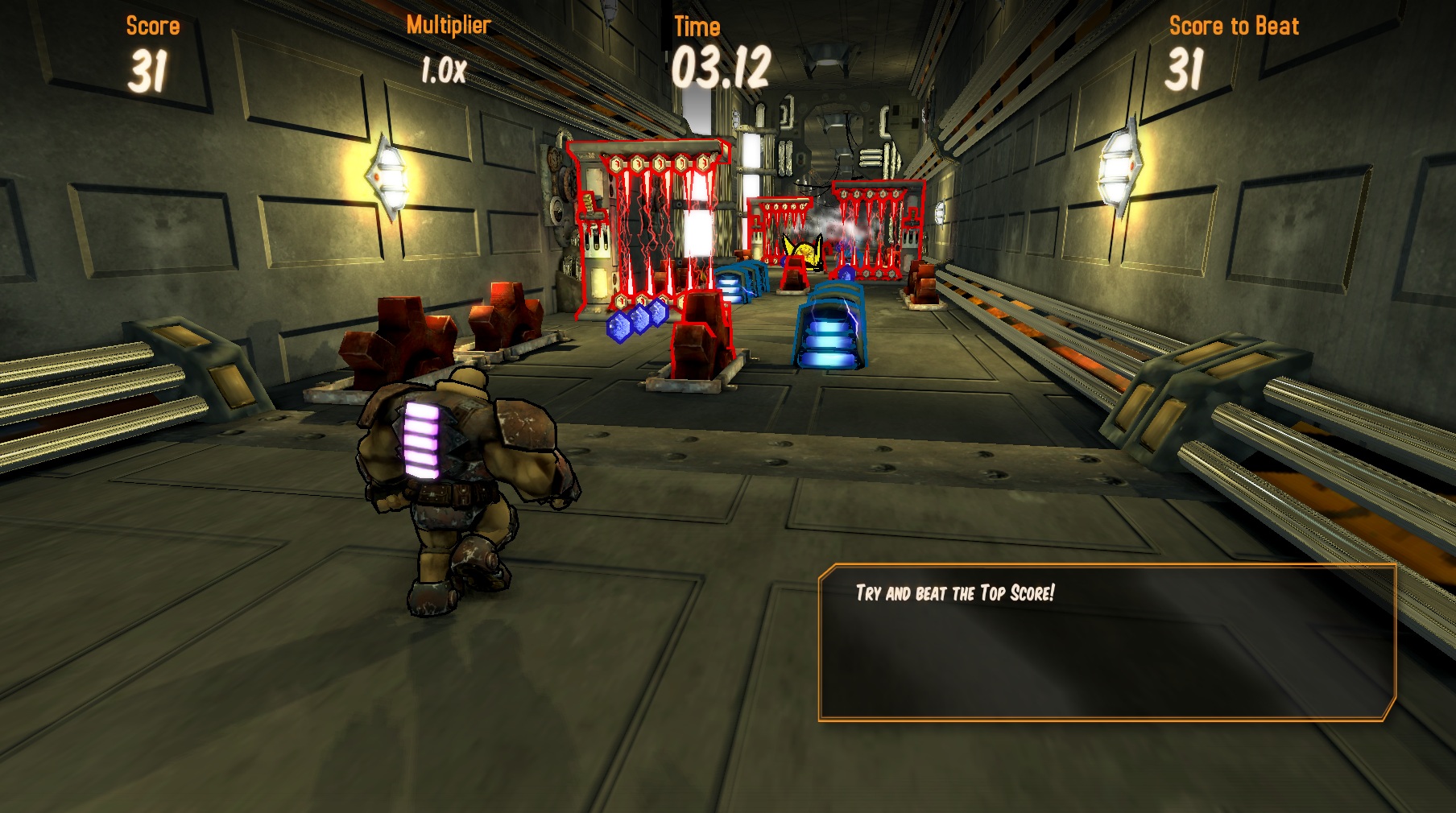 The procedurally generated levels only add to the challenge,preventing you from becoming familiar with layouts and tracks. It’s a very clever way to make your success all about skill and reaction times – so top up on the caffeine and get practicing, because if you’re going to stick with Bust-n-Rush you’ll need it! Combos and multipliers net ever higher scores, and in yet another little twist of difficulty, you actually have to slow down and stop rushing to finish off a combo and bank it to your score.

It’s all about the balance between fun and frustration, the tiny little wobbles from a sense of accomplishment to one of pure, raging fury. It’s great! It is perhaps a little short on replayability value, and the time you can spend with it before your brain melts or the frustration gets too much is limited. Despite the fact the levels are procedurally generated things can also get repetitious – although the goals change what you’re doing to achieve them is very much the same.

Audio & Visual:
Bust-n-Rush is like a living comic book, one that moves ridiculously fast. The outlined style brings a nice distinction to everything that makes sure that when you crack your skull into a giant rock and die, it’s your own fault. The three different settings do a good job of keeping things fresh, although you’ll be speeding by everything so quickly you’ll barely have time to notice. Of course certain elements pop up again and again, but the same point applies – you’ll be focused so completely on not screwing up that it simply doesn’t register.

When you take a minute to actually look at Bust-n-Rush it doesn’t disappoint- Kovo looks like he’s stepped straight out of a Marvel comic book and the environments are packed with dynamic detail that cleverly keeps the bright colours to the obstacles. 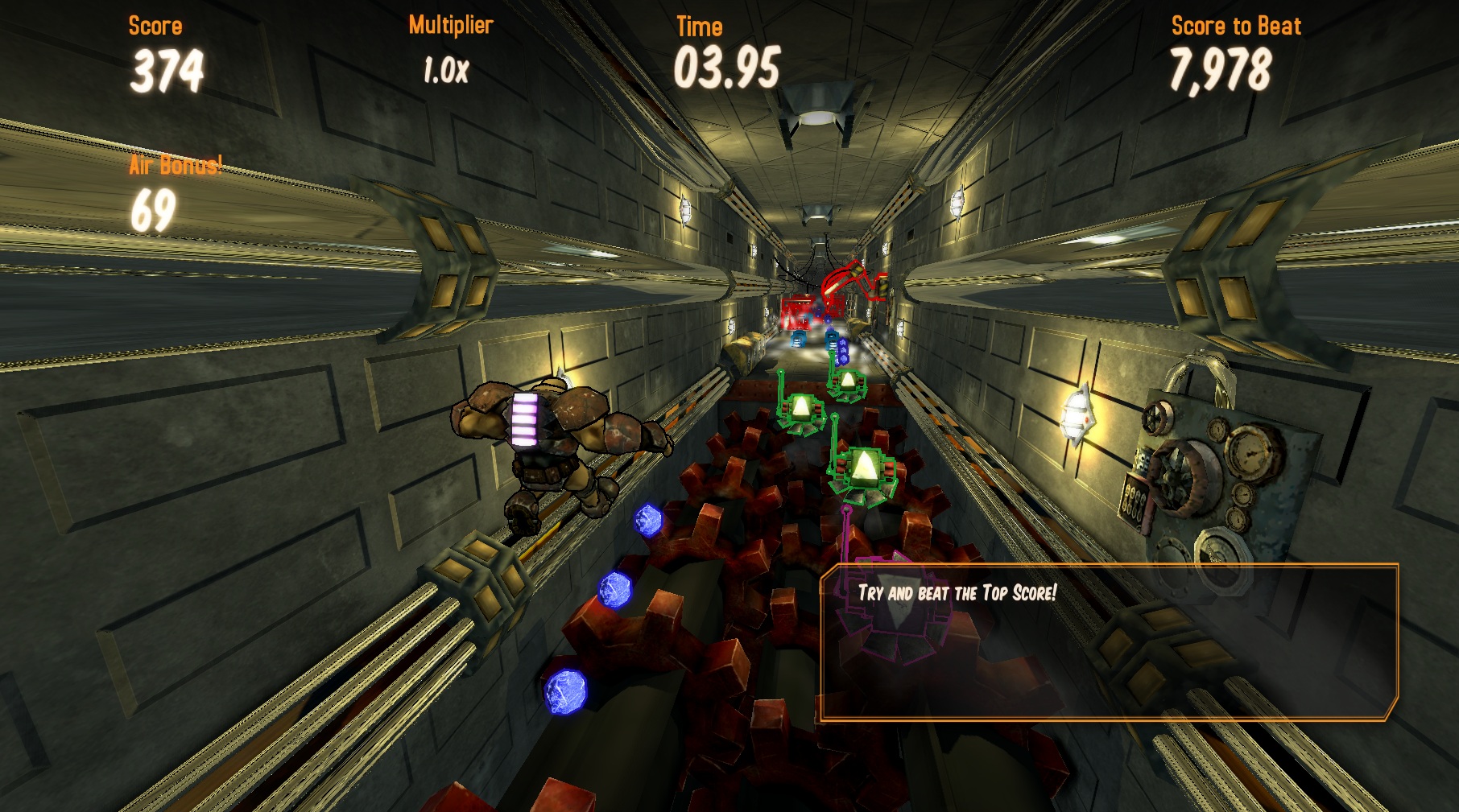 The music in Bust-n-Rush is like the soundtrack to an 80’s sci fi action movie (and I mean that as someone who loves those things) – a kind of techno rock that fits perfectly with the gameplay. Unlike the visuals the sound track is something you can actually appreciate while playing, and it has that lovely effect of sucking you even further into the game. Completing a challenge gets a fantastic little guitar riff from Kovo, and the few sound effects in game have a fantastic over the top quality (SOOPER SCORRRRRRB!!!).

Overall:
Bust-n-Rush is incredibly impressive for a first game. The presentation is fantastic and the option to pay an extra dollar for the soundtrack is certainly worth it. Depending on your gaming outlook the difficulty level may be a turn off or mana from heaven – but the quality of build here is top notch whatever your outlook. Techtonic have pushed the runner genre as far as it can go with Bust-n-Rush, and although it may be frustrating and overwhelming at times, at others it is addictive, challenging, rewarding and a whole lot of fun.