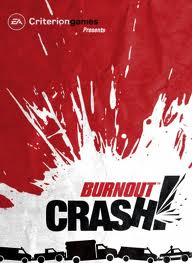 Apart from having a really fun name to say (I think it’s the exclamation point, it makes it all dramatic and such), Burnout Crash! is also a great racing (or, crashing, really) game. Plus, its set in a city called Crash City, the town planners were clearly just asking for it with that name. Or that’s what I tell myself as I destroy their previously peaceful metropolis, laughing maniacally behind the wheel of my wayward car.

There are six roads on your crash road trip, each of them have several intersections that you unlock as you collect stars. Collecting stars will also upgrade your car and status. While stars might be harder to get in the beginning while you’re getting your crash-legs, they become easier to come by as you become a crash veteran.

There are only two controls for Burnout Crash!, directional and the explode button. When you’re trying to make the biggest possible crash, the explode on order function is a great thing to have.

There are a few different modes in Burnout Crash!, each depending on different things to score or end the crash run on. Normal mode ends when five cars escape your crashing clutches, Pile Up mode depends on you keeping an inferno meter up by keeping the fires on your screen burning bright, and Rush Hour mode has a 90 second countdown clock with a huge amount of cars zipping across your screen just begging to be crashed into.

All the modes start with you heading towards an intersection in a working car and have to collide with one of the cars as you approach the intersection and from there, well it’s what you make it. You can’t technically steer after your first crash, but you can direct your car as it explodes and flies through the air. 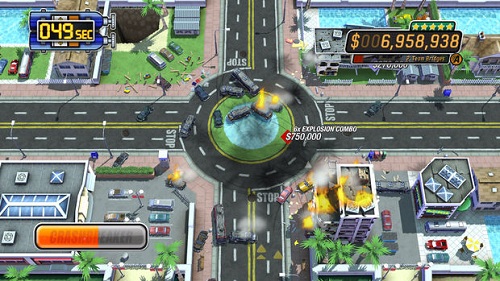 Pile-ups are your friend in this game, getting a set-up where you have car remains littered across the intersection are great (in this context). You get bonuses for them catching fire as well, although exploding near them will cause them to disperse or disappear so its best to do this when you’ve got a nice large amount sitting there. 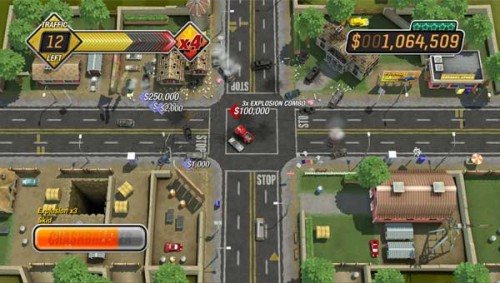 The intersections start off as a standard, easy + shape, and evolve to become more of a pain with more routes to take care of. Making sure that cars don’t escape become more of an effort and requires more tactics, such as pretending crashed cars are cue balls, and conserving your explosions for truly important times. 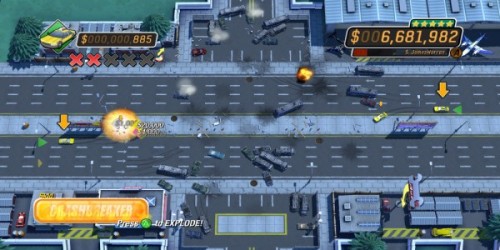 You get massive bonuses for setting of chain events, or actually employing tactics in your quest to demolish everything. Plus, if you make it far enough through the level you get highly entertaining super features like a tornado that rips through everything and gives you a money bonus and star for your troubles. There are also cars that pass through that have their own bonuses such as an ambulance that gives you an extra life if you let it pass through unscathed, a bulldozer which destroys things in its way, a cash truck which gives you a cash bonus for crashing, a petrol tank (which you can imagine is pretty awesome), and heaps more goodies that make this game even more fun.

In total there are 54 levels, with 5 possible stars for each level. You may find yourself redoing a few levels just to get those stars to get that pretty car to crash or move to the next level. Each level ends with a summary of the amount of damage you’ve caused, how much you’ve earned, and how many stars you’ve earned. Seeing those dollars go up because of the fun you’ve had crashing things is truly a great thing.

One downside to the game is having to re-do levels just for that one star, which is probably annoyingly difficult one to get. However, it really pushes you to get better, whether or not you want it.

Although from afar the visuals seem to be simple and cartoony, they actually hold up quite well and the style is reminiscent of older, but very good, games. The definition of the graphics managed to do quite well considering the size of my TV screen.

Burnout Crash! has a decent soundtrack and even though the selection is a little small I didn’t find myself getting annoyed with it at any point. Probably because the songs which have words and are recognisable are played over the menu or when a special feature comes across your screen. The in-play soundtrack chills out in the background and subtly helps you get more engrossed and involved in the game.

Burnout Crash! is one of those games that doesn’t look like much, doesn’t sound like much, but God you can waste hours at a time on it. Tearing myself away from it to write this review was effort enough. With a multitude of levels and great fun of crashing Burnout Crash! is sure to entertain. Until you get tired of the gameplay, which depends on your attention span.

I give Burnout Crash!