Bullistic sticks very much to the style of the Angry Birds physics puzzler, but brings a tongue-in-cheek crassness that’s bound to put a smile on your face… at least, the first time you see it. 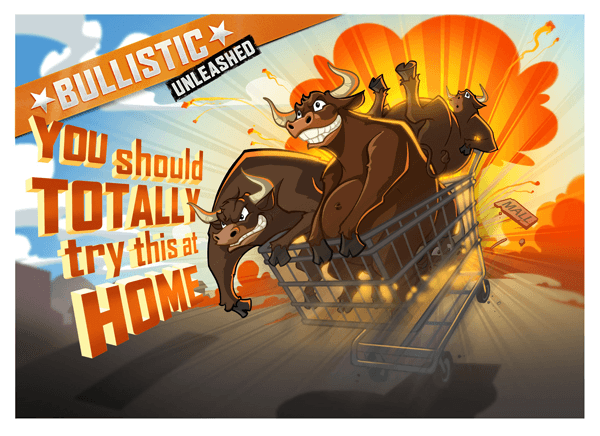 Erm… I guess a group of bulls are hatin’ on a Mall of some kind? Maybe they weren’t allowed to return a china tea set that clearly had a defect before they accidentally broke it… /shrug/

As mentioned above, this is very much inspired by the Angry Birds catapulting disgruntled creatures at walls to cause the most amount of havoc possible. It does add it’s own spin on the genre, however, and brings a lot of interesting style to the table.

When you first get into a level, you see a bull is “sitting” atop a pole of some kind. It doesn’t look comfortable. Of course, to launch him, you need to drag him away from the pole and let go, a-la Angry Birds. But when you pull him away, you see he is attached to the pole by his scrotum. Two bull-sized balls remain firmly attached to the pole, allowing you to harness the elasticity of the male cow scrotum and launch him into the air. 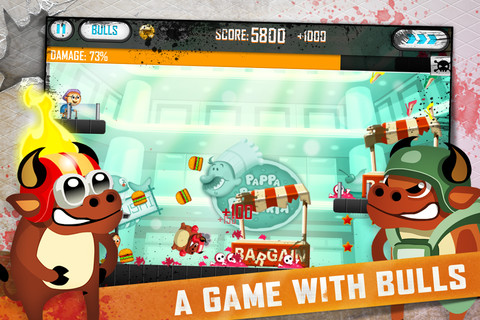 The bull with then roll up into a ball, crashing through stalls, items, and people, doing as much damage as he can muster to the Mall and it’s customers. There are also special components, like bumpers and cannons that you can use to keep up the pinball-esque combo going. Unfortunately, everything seems a little out of your control; and if you manage to use the cannons correctly (tap on them to fire; they change their aim themselves), and are lucky enough to hit the bumpers, then you can be bouncing around the mall almost indefinitely.

With Angry Birds, it’s all about figuring out the right place to hit the structure; to find it’s weak point and bring the whole thing toppling down. But with Bullistic, there’s not really much finesse you can develop, or even use to better complete a level. So you simply end up launching and hoping it hits something, or that it reaches a component that prolongs it’s travel time to hit more things. This can result in very long, at minimally productive shots. 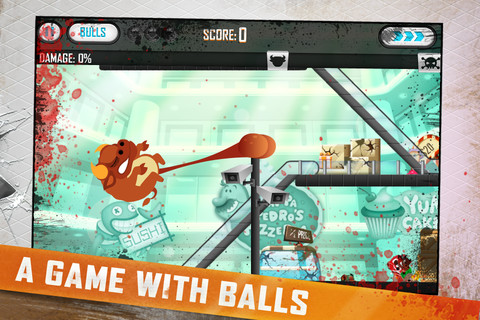 Each level is pretty bland. While the art style and detail is good, every level looks exactly the same; they’re just laid out differently. The level selection screen looks okay, but selecting the level you want to play is a little on the buggy side.

As you progress through the game, you’ll be introduced to new bulls with special abilities, again, just like Angry Birds. This time, however, you can choose which bulls you want to use for a level, and there’s quite a few to choose from. One, for example, nosedives to the ground when you tap the screen while he’s flying through the air. Unfortunately this particular one may end up flying through solid ground if he’s going too fast for the physics to keep up. 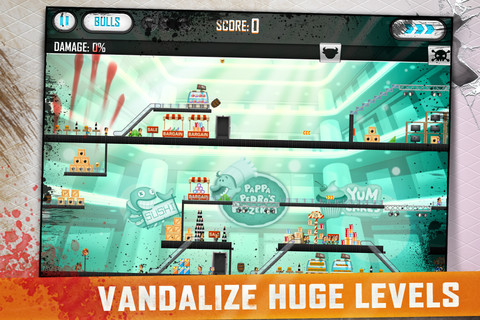 From time to time a bull will appear presenting you with some choices, or informing you of a particular feature of the game. To close them, you tap on the “X”, as with most popup interfaces; but they are situated in particular parts of the bull. His groin, for example; or maybe an eye. So when you close the popup, the bull reacts as one would it he was poked in those particular places. This adds well to the humour and style of the game.

Unfortunately this humour only works the first couple of times you see it, and so isn’t enough to carry the whole game. There are nice touches to the gameplay, reacting to a bull rolling over a person, people screaming and running away, or when a bull falls into a meat grinder. Each level requires a certain level of damage to pass it, and when you hit that mark, it makes sure you know it through sound effects and animations. 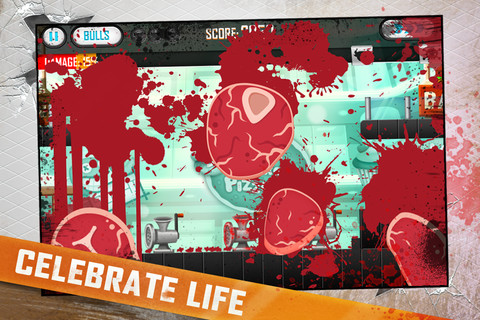 The sound effects are super high quality, and really accentuate the cartoony and over the top nature of the gameplay. There’s pretty much no music, apart from an awesome 10 second track announcing your completing a level.

This game looks great; there’s no two ways about it. The style is clearly defined, and has a good dollop of crass humour to keep things sweet. The bulls have a great character to them, as do the customers roaming the levels, and the animations to go along with the numerous forms of destruction that can happen. 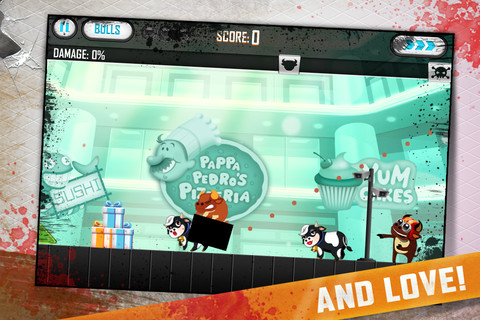 Even though the quality of the assets in this game is amazingly high, especially for a physics-puzzler, the humour doesn’t really last that long, and the gameplay is buggy and unengaging. This game is annoyingly close to being awesome, but it’s flaws really keep it from reaching it’s true potential.