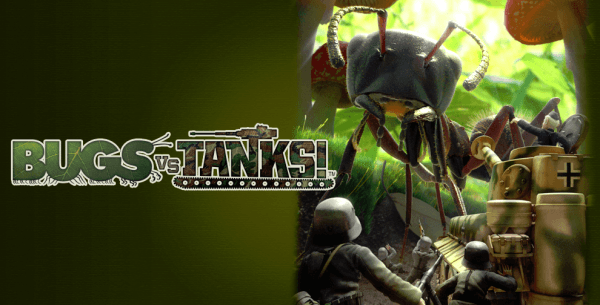 Overview
The campy science fiction trope has been done a few times before. Giant bugs from outer space invade, and it’s up to we, the few soldiers left, to stand and fight as we repel that alien threat. BUGS vs. TANKS! turns that on its head a bit, but the idea is still there. With famed game designer Keiji Inafune (Capcom‘s Mega Man, Onimusha, Dead Rising) at the helm, how does this Man-versus-Insect game hold up? Is it worthy of your collection or should you squash it underfoot? Let’s find out. 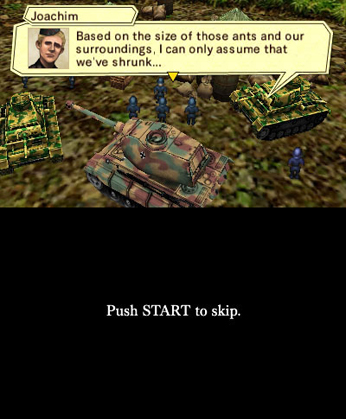 Story
In the midst of World War II, the battles continue to rage on. It’s been reported that a few battalions of tanks have gone missing. At the end of the day, the headlines in the newspapers simply wrote them off as killed-in-action, but that was not the case. In reality, they were somehow shrunk down. They continued to fight, but no longer was it for the war that had ravaged entire nations – now it was for their survival against insects and arachnids many times their size.

Sergeant, with Ernst and Joachim under your command, you must meet up with the rest of your German tank battalion, secure land and resources, fight for your survival, and discover how to return to your normal size (if that’s even possible)! Who could have done it? Was it the dirty Americans!? We have to find out! 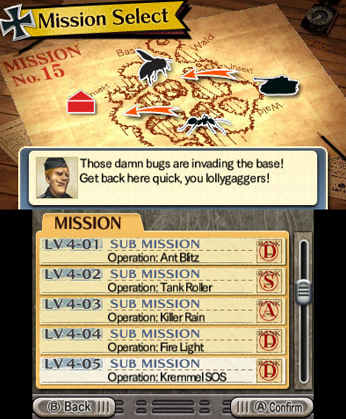 Gameplay
In BUGS vs. TANKS! you will take control of a single tank on a series of missions as you progress through the world. In this action game, the controls feel responsive and intuitive, with the circle pad controlling motion and turning and the face buttons handling the turning of the turret atop your tank.

One of the unique features about BUGS vs. TANKS! is in the simplicity of the combat. All you have to do is turn your turret toward a bug and the tank will automatically fire. After a brief period to reload, it will fire again. You can manually tell your crew to hold a round without firing, but with proper maneuvering this seems like it has no applicable function. 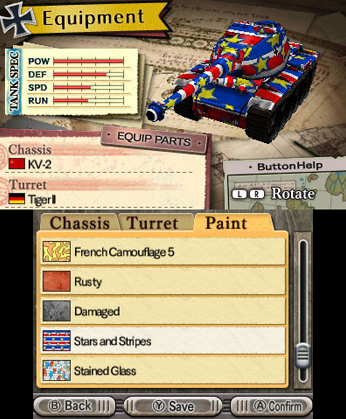 Not sure how to slow down a charging ant or moth? If you can turn your tank so the chassis is facing the creature, your machine gunner will lay down cover fire to slow the advancing enemy. This can be a great help when you’re literally getting swarmed or trying to slow down a particularly nasty foe.

Once per mission you also have the ability to send out an SOS signal. This will bring in a few tanks as backup long enough to unleash a volley sure to take down all but the meanest of foes around you.

Another great feature of BvT is the fact that you can collect tanks throughout your missions. Between missions you can change out your body style and turret to that of other tanks you’ve found – and every tank is authentic from World War II. Want to see a Sherman tank with a Panzer turret? You can do that. You can even grant them different paint jobs. Why not throw pink or orange on that bad boy? All of the collection and customization give the game a great deal of longevity and personal draw. Spending a few extra minutes to track down the tank parts on an otherwise short mission often feels like its own reward and seeing how everything plays together is fun in itself. 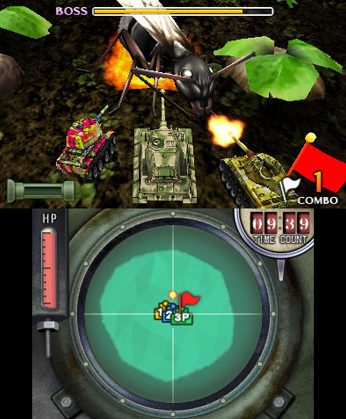 The game was also clearly designed with the mobile gamer in mind. Nearly all of the 35+ missions can be completed fairly quickly. Objectives will range everywhere from seek-and-destroy to base defense to resource gathering, and the campaign does a good job of peppering everything throughout so you never get too stale on one type.

Visuals & Audio
BUGS vs. TANKS! is not a particularly fantastic looking game. Environments can feel somewhat muddy and enemy design, while slightly varied, ultimately all feels pretty similar – whether you’re fighting ants, termites, or whatever, they all looks fairly alike and move the same way. Moths, bees, spiders, and the like do a good job of mixing up the boring look of the ground combat though.

While a lot of the enemies and environments in the game feel quite paralleled, the personalized tank design and the hand-drawn character portraits are fun to see. Tank parts can vary wildly and the paint jobs do a good job giving your eyes something new to gander at as well. 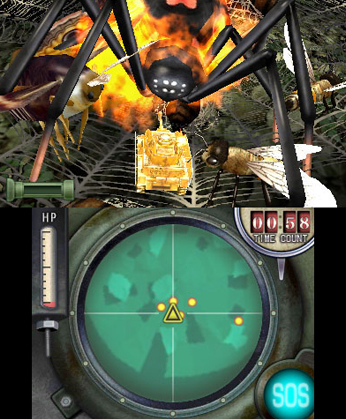 The soundtrack in the game feels like your average military game. Nothing stands out about the music. Sound effects are also fairly straightforward, but they fail to deliver the impact you should feel when a tank fires a round. It is a nice touch, however, that they had the soldiers speaking authentic German for the few phrases they uttered out loud.

Overall
Overall, BUGS vs. TANKS! is quite a lot of fun to play in short, bite-sized chunks. If you play for extended periods it can begin to grind on you a bit. The collection and customization go a long way toward helping this gain lasting appeal, even if the visuals and audio somewhat hamper the experience. If you’re looking for a great B-movie class game (think Earth Defense Force) with a splash of Honey, I Shrunk the Kids, you’ll have a blast with BUGS vs. TANKS!