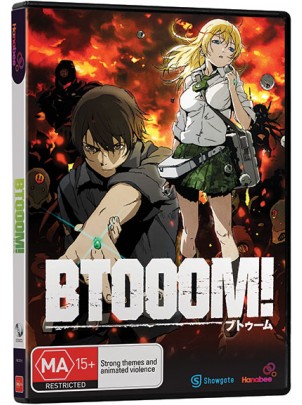 Mixing genres can get hard for developers nowadays. People seem to be demanding more out of pop culture products (and products in general) which means they don’t just want the cliché action story or a silly romantic tale. Mixing genres isn’t a new concept in any way but it is something that I believe has not been entirely mastered and, while some do it extremely well, others find it hard to walk the fine line between two styles of storytelling.

“Btooom!” is an Anime that possesses both action and romance which is a combination of genres I find odd but also one that watching “Btooom!” helped me, somewhat, come to terms with. It’s not your average love story but nor is it your average action one, it lies somewhere in between the two and I can see why fans around the world love it. 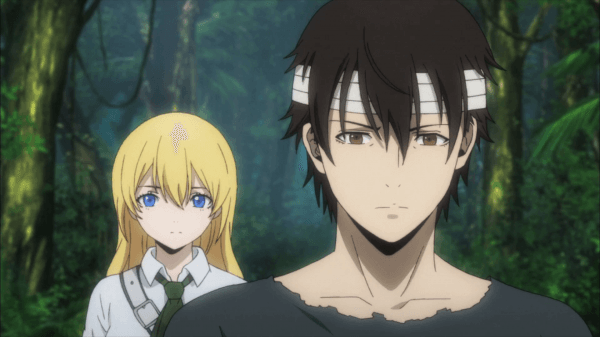 “Btooom!” is a warfare-based video game that exists within the story of…”Btooom!”. It’s a console game that has taken the world by storm and, although not everyone plays it like in Animes such as “Sword Art Online”, but it has enough of a fanbase to be considered one of the biggest games worldwide. Ryouta Sakamoto is a real loser and the story’s main protagonist. How unfortunate. He’s a 22 year old man that lives at home and is unemployed, that’s not what makes him the loser though, what makes him a loser is that he spends all day in the dark playing “Btooom!”, he’s never had a job and he mistreats his mother in a way that you can’t really look past.

He’s a grade-a loser but he think he is pretty awesome since he is ranked extremely high worldwide in “Btooom!”. One day our fearless hero wakes up on what seems like a deserted island. With his backpack to one side of him and a sling of bombs to the otherside of him, he soon realises that he is in some deep trouble. After being attacked by a “crazed” man using bombs, Sakamoto confirms his theory that this is an island where I grave game is taking place and that game just happens to be almost like “Btooom!”. Now begins what will be the most terrifying time of his life but it seems as though his years of playing “Btooom!” are going to come in handy out there on the island. 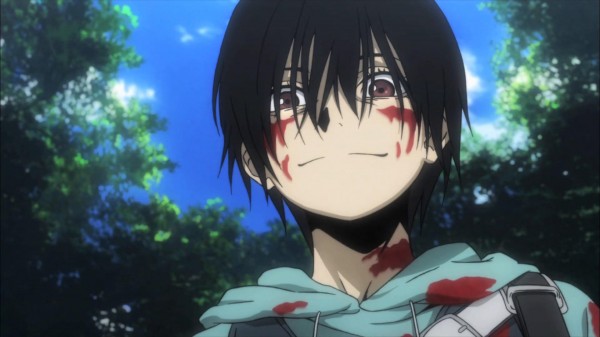 Let’s be honest here, this type of thing has been done before; some young gamer gets forced into a situation that brings his favourite game into reality. It’s been done time and time again but the fact is…there’s no problem with that, it’s how it is executed that counts in the end and I feel as though the storyline of “Btooom!” has been executed properly. I wish I could say the same about it’s characters though. There’s none of this “virtual reality” stuff going down in “Btooom!”, these people are brought to a deserted island and THAT is where the game goes down.

What I enjoyed the most about the setup is that not everyone on the island were players of the game, I believe there was actually only three of them, the others just had to learn what has to be done to win and how to go about it, others just could not grasp what was happening and were quickly disposed of. The characters though…let’s just say most of them were not written well, including the main ones that took up most of the screentime. There were inconsistencies in a great deal of characters, they would almost forget what just happened or make silly comments that really pushed me away from the series. Things like Sakamoto realising and confirming that he has timed explosives but questioning why they didn’t explode straight away once he threw them. 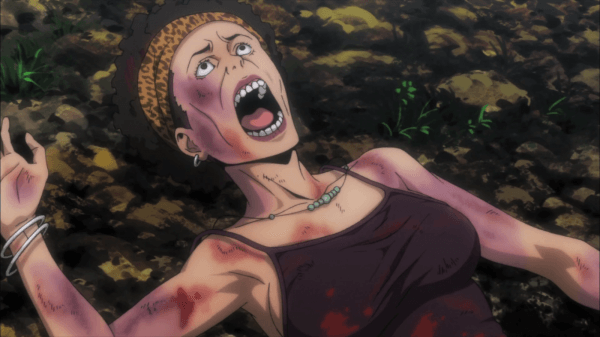 I appreciate the “real” themes that made up some of what the characters are in regards to their personality but, at times, I felt it became a bit too much and was played on well beyond its acceptable limit. Dark themes like rape were present a great deal of the time and a particular character continuously came into contact with these disgusting male characters, she was constantly on the verge of…you know what, and I felt that they could have toned it down a bit.

I understand it wanted to be, for lack of a better word, “real” and the story itself was quite hellish but it just wasn’t necessary. That is what I felt. Character interactions were bland and they bored me most of the time. You could absolutely avert your gaze or focus on other things while watching this series and still pretty much understand what was going down. The good thing about “Btooom!” that somewhat makes up for everything it lacks is that it has great pacing. Within 12 episodes they did a great deal and told one heck of a story. Yes, some things were skimmed over but really it was still done well. I’ll give “Btooom!” credit for that! 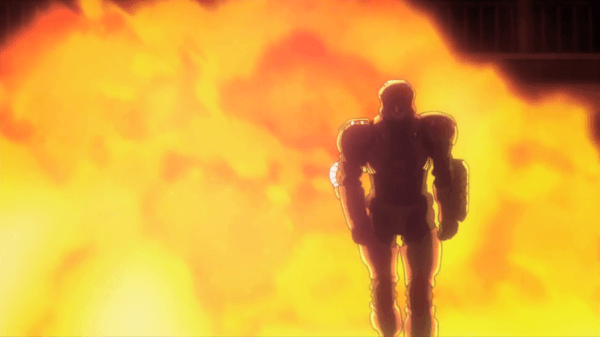 “Btooom!” is a hard Anime to pin down when it comes to its visual style. It doesn’t necessarily have a style of its own, it looks a great deal like a lot of Anime out there so I can’t exactly give it any points for style alone. The characters looked quite real but, in true Anime style, still disproportional in certain ways. What it did nicely was environmental shots, they looked absolutely incredible because they had a lot to work with. This wasn’t an Anime set in a normal city, it was set on a seemingly tropical island. There were beaches and forests and lakes for these people to swim in and bathe in, if folks weren’t dying left right and centre this place would be a paradise! Unfortunately they all are.

I’ll also give props to the animation within “Btooom!”, it’s an action series but action scenes are few and far between so it’s not often you get to see some all out slaying, when you do though…it’s some damn good stuff! Unfortunately it being on a DVD didn’t do as much justice to the actual animation, I don’t often notice this but it seemed grainy and often rough when kicking into adrenalin-fueled scenes. I’ve never seen something like that on a Blu-Ray but I often notice it when watching high-quality Anime on DVDs. If I’m to recommend anything it would be to watch this one on Blu-Ray just to see how good the animation can get. It can sometimes look sloppy but it has been over a year since this series was made and released so it does have time against it. Try to not let that get to you. 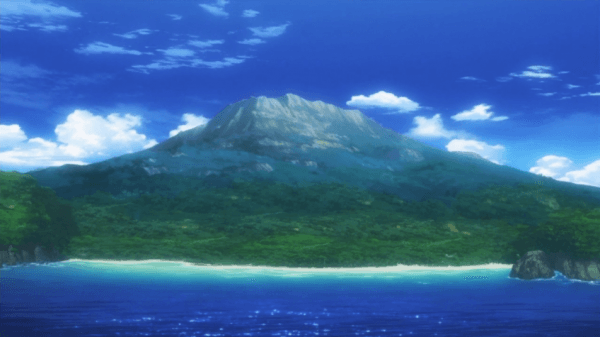 I’m so very divided on the audio aspect of “Btooom!”. It has a brilliant soundtrack but a terrible voice cast so you can see why I’m so torn. Musically this series absolutely rocked the house. It blended so many different genres and used them accordingly to get some incredible results. At times it was almost like watching something like “Cowboy Bebop”, the music was jazzy and a little bit funky but constantly changed between heavy rock and orchestral numbers and it all really tied situations together.

I always like a nice soundtrack and I have to say I took a fair bit away from this one. Unfortunately the voice acting was not as good as the music. A lot of the actors and actresses fell flat and made the characters come across quite silly, I suppose I can’t put all the blame on them because the dialogue that was written for them was sub-par to say the least. Most characters were extremely anoying and even the characters that weren’t annoying were just unnecessarily arrogant-sounding. Sometimes these characters’ tones would not exactly match up to situations and it really hits hard especially when you’re meant to be watching such a crazy event unfold.

There really wasn’t much to see here. It basically had the usual Anime extras. Things like clean opening and closing sequences came as extras, alongside trailers and whatnot. There were a couple “Btooom!” digests on the disc which pretty much recapped what was going on within the series as well as gave info on characters that you probably didn’t already know. The given info isn’t entirely interesting though, it basically outlines characters and gives you information that you probably don’t even care about like blood type and body dimensions. It was a nice touch but it really added nothing though it still gets points for being around. 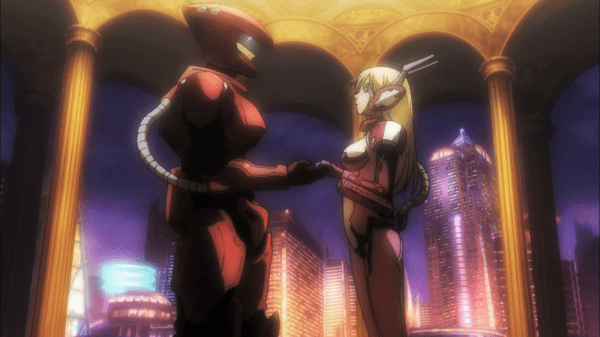 “Btooom!” is a good little Anime that does a lot right but it also does a few things wrong. Not every Anime can be perfect, not every Anime can even get close to being perfect and that includes this one, the good thing is that “Btooom!” also doesn’t get close to being terrible so I would still consider it a great series that many people would enjoy but, as the CC Review Guidelines say; “A fine product that would be best suited to a preferred audience. There may be a few flaws, but most will find the offerings provided enjoyable enough to warrant a purchase.”, I don’t often quote the guidelines but I feel as though they perfectly represent my thoughts on this series.

Romance and action together in one place can be a hard thing for people to grasp but I still feel as though “Btooom!” blends them well…even if the characters can’t really have any bearable conversation. It’s a good series but I suggest you all do a little research before jumping into it, either way I think a lot of people will find something great to take away from this series.