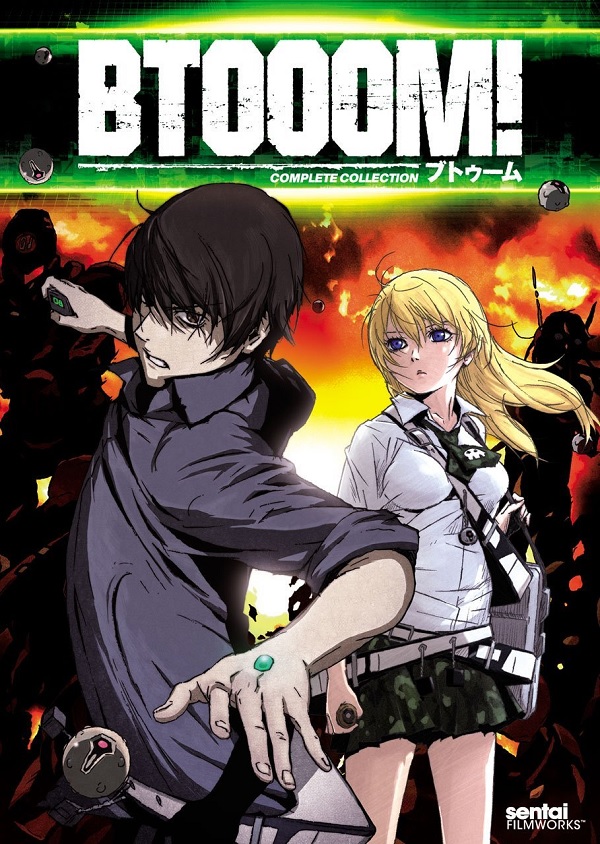 Overview
Surviving against the elements can push people to take extreme measures, but surviving against your fellow man can reveal the darkest nature of humanity. Perhaps that is why in recent years, many mediums have portrayed people fighting against one another in order to survive and why zombies have been in the spotlight as it takes away the guilt of killing a living person while still placing humans against former humans. BTOOOM! is the latest take on a survival based series and now that the anime has made its way to North America is it worth your money?

Story
A popular online video game called BTOOOM has been sweeping the world with millions of people playing it every day. In the game teams battle against one another using a variety of bombs and the last team standing wins. Among the millions of players, ten people are on top of the leaderboards and are considered the best players of BTOOOM. One of these players happens to be Ryuta Sakamoto, a Japanese gamer who has shut himself away from the world who regularly lashes out violently against his family. 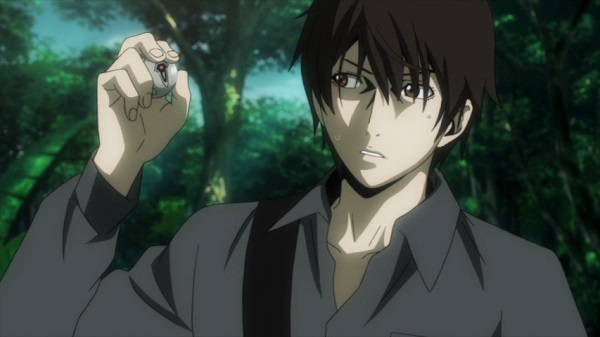 When Sakamoto suddenly wakes up hanging from a tree by a parachute, he finds himself stuck on a jungle island. The last thing Sakamoto can remember is going to a convenience store but now he finds himself trapped on an island with a strange chip embedded in his hand, seemingly alone. When the first sign of life appears in front of him, it also carries a dangerous threat as this person attempts to take his life using explosives mimicking those used in BTOOOM.

Viewers eventually learn that Sakamoto is one of twenty to thirty people who have been taken from their homes and dropped on a remote island. The only way to escape is to use BIMs, miniature bombs that come in a number of varieties, to kill seven other people to obtain their chips, as the only way to get off the island is by having eight chips in total, their own included, and the only way to take a chip off is after the wearer’s heartbeat has stopped.

Thrown into a life or death struggle on a remote island, Sakamoto finds himself with familiar weaponry but an explosion in this game doesn’t end in a respawn, it ends with pain and death. However Sakamoto is far from the only person familiar with these types of weapons and while he may feel wary of taking other people’s lives and is willing to work together with others, the rest of the people on the island could be thinking only of their own survival, killing anyone who might get in their way. 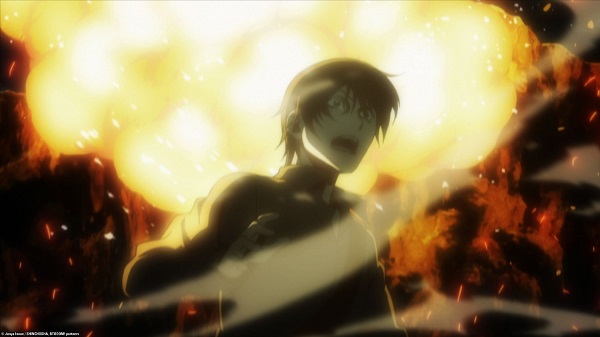 BTOOOM! presents viewers with an interesting set of characters but thanks to their nature it is difficult to find most of them likable. You see, the only way these people were selected to take part in this death match is by being nominated by others. This means that the dregs of society have been gathered together in one place. In the case of Sakamoto, we already know that he is a NEET from a broken home with violent outbursts that have put his family at their wits end, while a few other participants’ dark pasts are brought to the light, revealing many of them to be either sinister at heart, backstabbing, or straight up murderers to begin with.

There lies one inconsistency in this selection process however, as it exposes a flaw with the nomination process. A girl named Himiko, who just so happens to look just like Sakamoto’s in-game wife, has also been dropped into the game and while the reason for her nomination is shown and understandable, it does show that it is entirely possible for people to be thrown into this death match even if they aren’t completely at fault for the events that occurred. 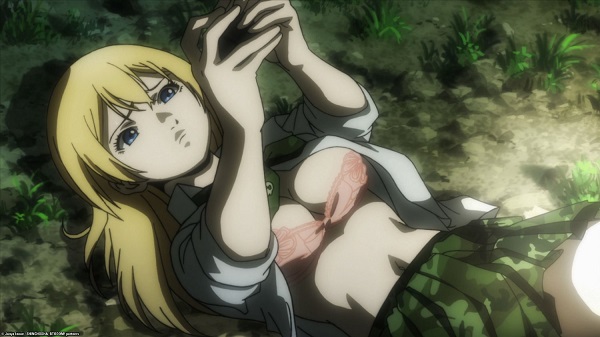 That being said, throughout the course of the series we do see Sakamoto go through a number of challenges which see him come to grips with the realities of the game as well as Himiko struggle against her hatred and distrust of men, which is caused not only by her backstory but also due to rape attempts on the island by people she tried to trust, making for some interesting developments as these two slowly begin to work together and learn there is more connecting them than just their current circumstances.

While these two get a little bit of development, it merely covers them overcoming their issues while working together to survive. As for the rest of the cast, the interesting part doesn’t come from development but figuring out just what they are up to instead. As mentioned earlier, almost everyone on the island is in it for their own survival and will do whatever it takes to escape the island. This leaves viewers trying to figure out each character’s plans as the action takes center stage, though there are still a handful of emotional moments that do spring up amongst the bloodshed.

BTOOOM is at its best when there is a battle occurring. Thanks to a number of tools brought from the outside world, fights come in the forms of manipulating bomb placement and taking advantage of various bomb types, battling with knives, or even a stun gun. There is also some strategy when it comes to using the chips placed in a player’s hand, as they can be used to activate a sonar to find where nearby survivors are at, keeping the suspense high. However after explaining the rules of the sonar ability and how it does not pick up people not moving, there are a number of times throughout the series that the sonar acts inconsistent with previously established rules. 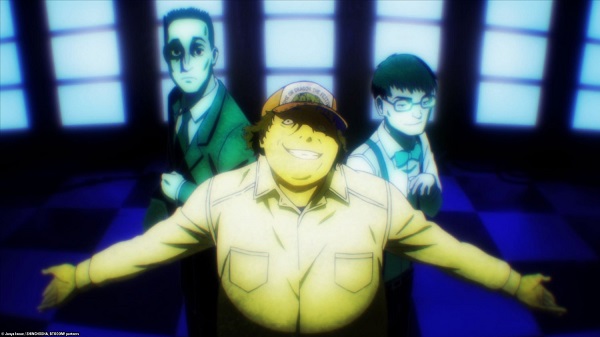 By the end of BTOOOM! viewers are left with plenty of hints as to what is really happening, including Sakamoto’s knowledge about who may be behind the game, and why these people have been placed on this island to kill each other, but nothing truly ends in this release as it leaves off on a cliffhanger with viewers who have enjoyed the series left hoping for either a second season or the official English release of the manga the series was adapted from to pick up the pace.

Visuals
It is clear coming into the series that Madhouse had a stylized look planned for the series and it works to their benefit. While the characters aren’t the most detailed looking, they have certainly used a more down to earth representation for their facial features and this helps make some of the facial expressions better looking and really helps deliver the psychotic nature of a few of the characters. There is some decent detail to be had as far as the fan-service character Himiko is concerned, but outside of that most of the clothing is kept pretty simple and while gore is present, it is rather basic for a series about blowing people up. 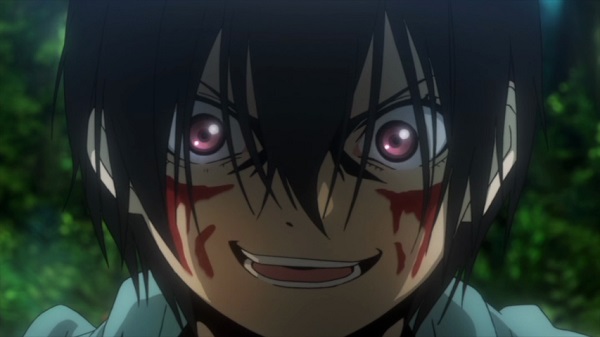 As far as the action goes, the character animation is fluidly handled and while the explosions help keep the level of intensity up, there are inconsistencies about the strengths of certain bombs. At one point we’re presented with a small explosion from a bomb while the same exact type is capable of annihilating a ten foot radius, often resulting in certain characters escaping by the skin of their teeth thanks to varying explosive radius’.

Audio
BTOOOM! sports a fairly satisfying English dub with believable voice work by the cast. This is a pretty great accomplishment considering there are characters from young teenagers to middle-aged salary men to voice in the series. While some may prefer the Japanese voice track included in the release, the English cast does a nice job giving a sense of danger to each confrontation with their character portrayals. 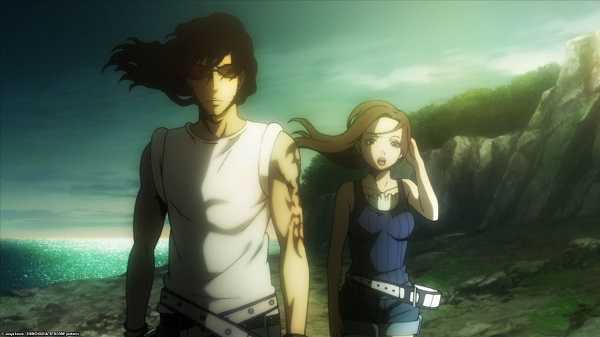 It is interesting to note that while there are some canned pieces of background music used throughout the series, there are also some incredible sounding tracks that lack lyrics but are used to great effect during important moments of the series. As for the opening theme, we have “No Pain, No Game” by nano which is excellent for a series such as this and an ending theme named “Aozora” by May’n provides a solemn close to each episode.

Extras
There are some rather basic bonus features on offer with this release. There are trailers for other Sentai Filmworks anime, a clean version of the opening and ending theme, and some Japanese promotional material. There are also a few Btooom Digests that are a few minutes long and show information and clips of killed characters.

Overall
BTOOOM! takes a common survival game path and amps things up with plenty of explosives. While the series’ characters can be hard to like or even get behind and the main storyline only really moves in the background as Sakamoto and Himiko try to survive, it tries to make up for it with some impressive action sequences and tense moments as viewers feel concerned about the only characters they really have a choice to care about before the release ends just as the plot begins to advance.