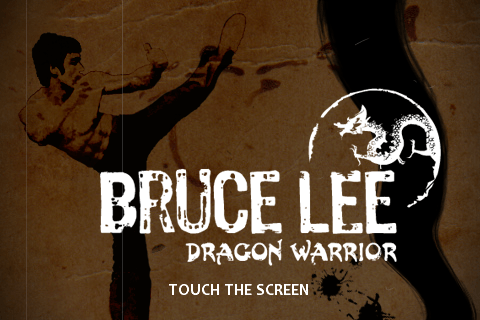 Story:
You are Bruce Lee in the prime of his youth and just as arrogant about his skills than any other teenager. By fighting on the streets of Hong Kong he gains a name for himself in the street as one of the toughest fighters. This quickly grabs the attention of a martial arts school who chooses to fight Bruce Lee himself. When the student is defeated he introduces Bruce to his master and so begins the long and enjoyable story of Bruce Lee’s rise to greatness.

Surprisingly the story mode for Bruce Lee is one of the best you will see in a fighting game, especially one for the iPhone. The story is cohesively told through text and comic book art in between fights. You will be able to navigate between fights using a world map to travel to tournaments, training sessions, and street fights. The story mode is quite long and is very engaging, reaching more than four hours in length if you rush and even more if you take part in the extra fights.

Graphics:
The 3D graphics you will see in Bruce Lee: Dragon Warrior are top notch for the iPhone. The game has been toted as using motion capture technology to make the character motions as lifelike as possible. Thankfully this developmental technique has transferred well into the gameplay and each technique used is fluid and is never over the top.

There are a total of ten different fighters available within the game and each one is unique to themselves and designed well. Each model may have a few fuzzy elements but they are colorful if nothing else. Considering each character has their own unique fighting style and moving style with no palette change between characters. 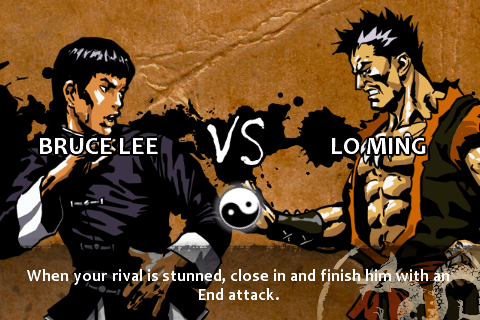 Considering the amount of fighting you will be doing during the story mode there are only five different venues that you shall do battle in. Though for these five levels there was definitely a great amount of attention paid towards them. Each level has small details that will leave you wondering what system you are actually playing on. Beyond the small details and occurrences happening around the fighters, there is even a day and night option for a bit more variety. Though essentially the same levels, with the addition of a night mode it practically doubles the amount of fighting stages available.

There are a variety of gameplay modes to choose from; such as Story, Arcade, Survival, Time Attack and Training. Surprisingly though there is no actual Versus mode. There is the computer to fight against with no option for human vs human combat. This is unfortunate because the actual fighting is top notch and it would be interesting to test your skills against other fighters.

As I said before Story Mode is Bruce Lee: Dragon Warrior’s bread and butter. The majority of gameplay will be take place in Story mode and in the end it is essential. When you first begin there is a large amount of characters and stages that are still locked. You will have to advance through the story mode and beat different fighters to unlock them and their stages.

Within the story mode you will be fighting amongst the other nine characters in the gameplay. As you do battle with them through the various fighting stages you will gain XP. As your Bruce Lee gains levels more bits of the game will be unlocked. One of these unlockable bits of gameplay is that you will occasionally learn your opponents moves. These can then be used in the Style Editor which is essentially a customization option for Bruce. It isn’t anything extravagant but the ability to modify your fighting style to mix together some of the best techniques from the best fighters is a nice touch. 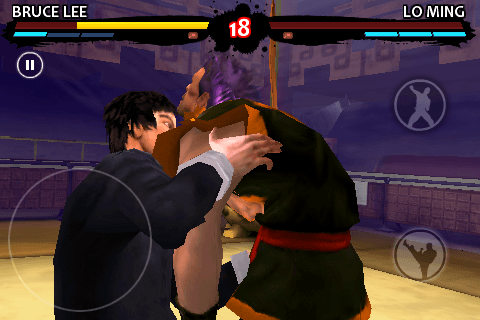 Speaking of the fighting; the fighting system would do these master fighters proud. There are high and low kicks, high and low punches to go over the simple basics. However there are also the special moves which will do significant damage towards your opponent. These special moves are used by gathered energy in the Chi bar, you can use a special move either through the specific direction combination or punch kick combo. There is also a counter system which will reduce your Chi by doing said counterattack successfully.

The control scheme for these attacks are quite simple. Directions are controlled through the d-pad/joystick in the left bottom corner, while punches and kicks are handled between a punch button and kick button on the right side with a small picture of the attack inside of the button. However the game has a small issue with the recognition of presses. Occasionally if you were to press the attacks to quickly, then your character will continue to attack in a queue of moves that will sometimes leave you wide open to counterattacks. In one such instance after being knocked down, my fighter stood up and performed a variety of kicks and punches into thin air even though I was only pushing the directional pad.

Overall:
In the end Bruce Lee: Dragon Warrior is an excellent fighting game and one of the top ones available for the iPhone. Though bear in mind it is a bit simple as there are only the standard attacks and special attacks. There are zero inhuman abilities or special attacks. You won’t be seeing any hadokens in this one. Besides the lack of player vs player combat Bruce Lee lives up to his legend here.

I give Bruce Lee: Dragon Warrior