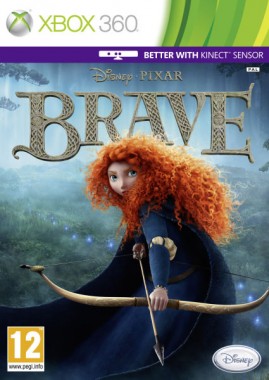 Overview:
Disney and Pixar are renowned for creating touching computer animated films which carry a message, moral or sentiment and tug on the heartstrings of new and old alike. This is done through hard work to make the animation top notch and by having all the areas like the musical score and pacing of the story come together to make a finished piece of emotive work.

So what do you do with significantly less development time and little room creativity, like most movie tie-in game developers have? Well, you make a fairly standard movie tie-in game; one with shortcomings young fans of the film will be more forgiving of but will still notice. Something playable enough to enjoy but unlikely to be remembered after the cinema and DVD release of the film have gone and past. 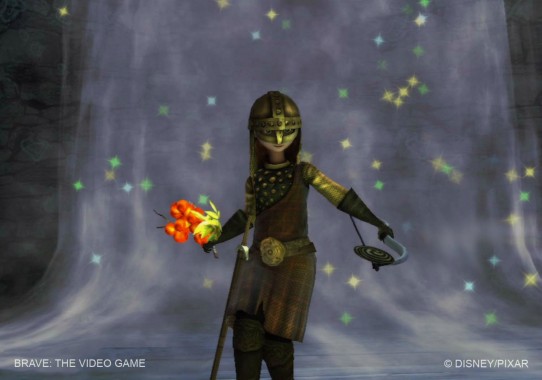 Story:
Brave: The Video Game doesn’t strictly follow the plot of the film as far as I’m aware, although I too am awaiting the general cinema release on 17th August so can’t say for certain. What I do know is that it’s similar with some alterations made for the benefit of gameplay, like various made-up enemies which you won’t see in the film that put some action in this action-adventure game.

The story goes a little something like this: as Merida, a young, spirited daughter of a King, you are a target for evil trying to get at your family to turn the balance of good and evil and cast this peaceful kingdom into darkness. A witch tricks you into feeding a cursed cake to your mother and three brothers which turns them into bears. Despite having only just been given your first bow and arrows by your father, you are swept away in a whirlwind adventure where you must break the spell on your family before they become part of Mor’du’s army (Mor’du being a dark, mythical bear in the film who acts as a device in the story to represent anger and all that is evil). For the fate of her family, it’s time for one small red-headed girl to be brave. 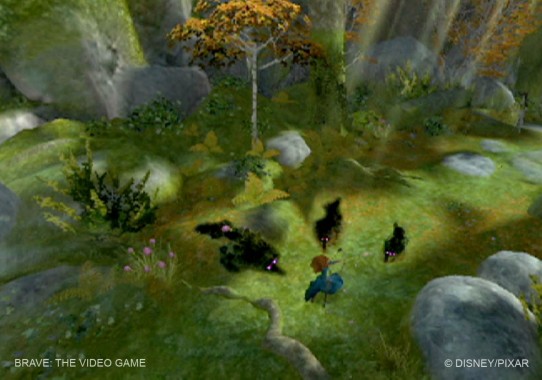 Gameplay:
Gameplay is movie tie-in fodder: run through a series of themed levels like caves, snow and forest, bashing up enemies when you meet them, solving the odd puzzle or two and ‘exploring’ in a linear fashion. Merida has two options for fighting – sword for close combat or rapid-fire arrows for ranged – in addition to 4 different worldly elements to use in battle. These elements are fire, ice, earth and wind, and add a new dimension to combat as you have to change between them to match each enemy type’s weakness, as indicated above their head for the benefit of those playing. In this respect it reminds me of an XBLA game called Ghostbusters: Sanctum of Slime (also by Behaviour Interactive) where you dispatch different ghosts with different weapons according to colour.

You play as Merida the majority of the time, but as well as her action, plat forming and puzzle sections, you take on the role of your mother or brothers as bears occasionally. The mother grizzly interjects at set points in the game when loads of enemies descend upon the scene. She uses her bear strength to scratch and charge down the forces of evil to protect her daughter. The brothers’ transformation is handled a little more light-heatedly, and as your adventure unfolds you utilise them for three-way puzzles, swapping between them to push buttons and pull switches. These puzzles could definitely get young minds ticking along and are a good difficulty for the target audience. 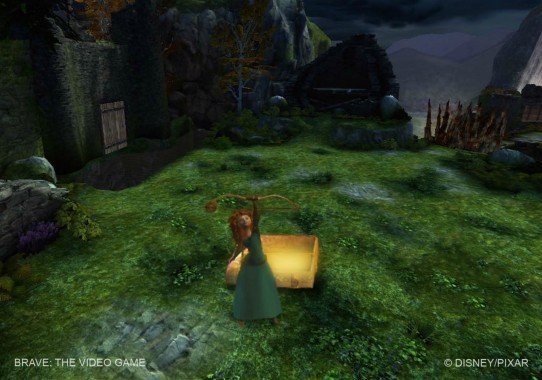 Thankfully, the game also supports two-player local co-op, and a partner can make the repetitive nature of the game less glaringly apparent. The second player can drop in and out as Will O Wisp, a blue ghost-like character with the same attacks as Merida so that player two isn’t at a disadvantage.

The problem is, though, player two is at a disadvantage. It’s as if Will O Wisp isn’t a valued member of the team. He can’t interact with surrounding objects like springboards. He’s always being left behind as the camera doesn’t follow him, made worse by the fact that when Merida uses a certain route which he can’t follow he has no choice but to wait to respawn with her in the new place. Then there’s his colour: his ethereal qualities make it difficult for the second player to trace their own position; he’s easily lost amidst the chaos of battle. Maybe it’s because he is, after all, a magical gust of wind, but his treatment can leave the second player feeling unloved and unwanted, not to mention frustrated.

On top of the 8/9 level main game, Kinect users get a bonus archery mode. I’m not sure the ‘Better with Kinect’ is quite truthful in this instance, although I can’t deny that it offers something completely different to the main story. The three mini-games – Quiver Limit, Survival and Quick Draw – use a three-step exaggerated archery gesture for some virtual target practice. Frankly, all are just shooting lifeless wooden targets despite sounding quite exciting. Plus, holding your arms in this position for extended periods of time can get tiring. 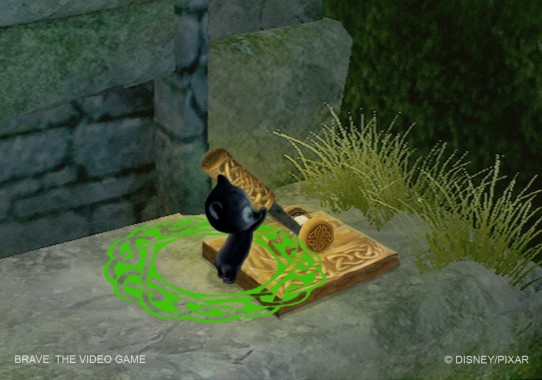 Visuals & Audio:
In the audio department you can expect cringe-worthy Scottish stereotyping, the accent cropping up both in longer pieces of narration and as a series of short ‘Och!’s and battle sounds. Graphically, it isn’t great either, but at least it’s deceiving. If you glanced over the screen it would look relatively pretty, but if you were to look any closer you would notice how it’s rough around the edges. Some of the visual effects, such as water crashing against the cliff face on a coastal level, aren’t pulled off convincingly.

Overall:
Whether Brave – the film- will work its Disney and Pixar magic to capture the hearts of audiences, I don’t know. The game, however, won’t go down as one of the great movie tie-in triumphs. It’s an average piece of movie merchandise which young fans of the film can certainly enjoy as a follow on to the trip to the cinema. In fact, it’s ideal for the under 12 age group as the difficulty of the puzzles and adventuring has clearly been geared towards them. This makes it all the more bewildering that he game as been labelled a PEGI 12 because the older the player the less they will get out of it.