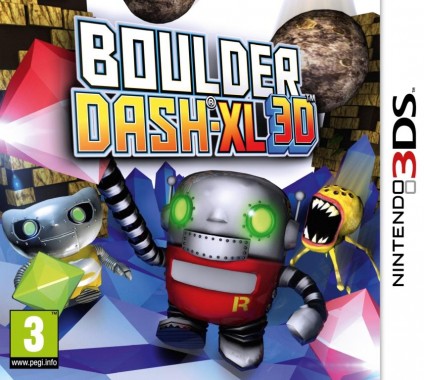 Overview:
Catnip Games was tasked with updating an old classic for Xbox Live Arcade and PC and in 2011 Boulder Dash XL was excavated from the craggy, ancient ruin of 1984’s Boulder Dash. The developer did a stellar job, refreshing the visuals but leaving the simple gameplay mechanics more or less untouched. Who, however, played this reboot and thought ‘you know what this needs: some nausea-inducing 3D effects courtesy of the 3DS’? Still, around a year after the big screen version here it is, with a budget £19.99 price tag to go some way towards making up the difference in price with the downloadable version. 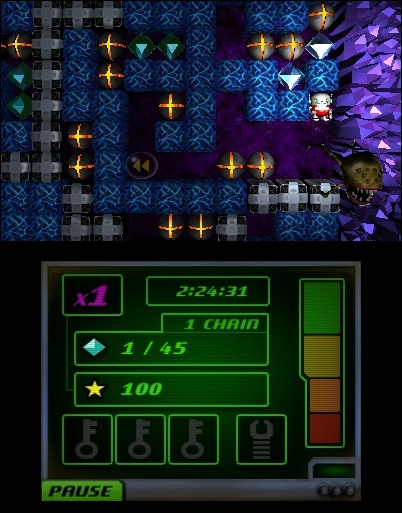 Gameplay:
It’s a simple game from simple time, with the classic premise, synonymous with that era, of running around collecting shiny things. The shiny things are played by diamonds, the adventurer played by a robot (Rockford or Crystal) and the danger, on this occasion, is cleverly cast as the falling boulder loosened by your own greed. There are also bugs lurking in your underground mining missions to contend with, but where the boulders crush you and kill you in one, a bug only takes off a portion of your energy when it manages to hit you.

You mine your way through small two-dimensional grids, chewing your way through earth and collecting jewels until you have enough to open the exit from the cave and complete the level. It’s called an action puzzler because you have to choose a path and assess the danger on the fly, pushing rocks or causing them to fall on purpose in order to free up a new path or jewel. You consider your surroundings all the time but it isn’t the sort of careful calculation of an out and out puzzle game due to the time limit. Then again, it would depend on what mode you are in, as the measured, tactical side to the game is an option.

Although it is sugar-coating the situation a little, technically-speaking there are five modes: Arcade, Puzzle, Zen, Score and Retro. In reality it’s more like three. Arcade mode is a race against the clock to seek out enough diamonds to meet the exit-unlock requirements. There’s usually plenty to spare once you’ve reached this target, which leaves room for repeated play throughs, as you can either do a basic completion of the level and get a green tick next to that selection, or collect every gem and get a gold tick. 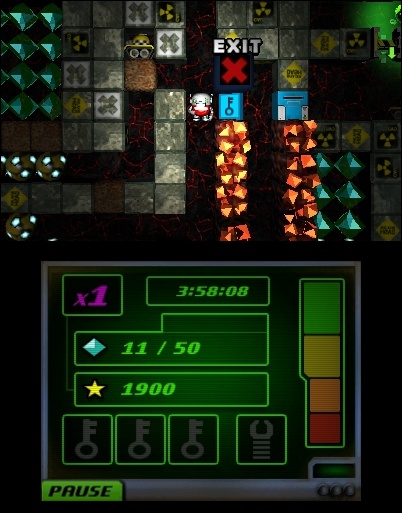 The Zen and Score modes, however, are made of the same stuff. Zen mode, as the name suggests, is a chilled out place to practise the caves from Arcade free of any time constraint, so you can plan out your route through the level. Score mode is similar gameplay-wise too, only with renewed focus on getting a high score by chaining treasure in quick succession for higher points bonuses. In Score mode, the girds you play on are much bigger – to promote repeated play throughs, bettering your old scroes by working out the best routes – although there is consequently a great deal less of them.

There are 150 caves in total but the game only really comes into its own in the puzzle and retro modes, which have 25 maps each. Puzzle mode offers the aforementioned slow and steady style of play which seems to suit Boulder Dash well. Less action more puzzler, this mode has much smaller caves in which every move you make is important and you’ll only reach the exit successfully if every move is done in the correct sequence. The thoughtful nature of play here, where you learn the way through using retry constantly, makes for a greater personal sense of achievement than the haphazard, bash and dash style of Arcade.

Retro too carries a similar feeling of reward when you do finally complete a level, but not for the same reasons. In this case, it is because of the challenge it poses. As well as the visuals reverting back to their previous incarnation, the difficulty goes old school, presenting a tough as nails wall of stone in the way of progress to remind you of how accustomed to we’ve all come to more forgiving games. 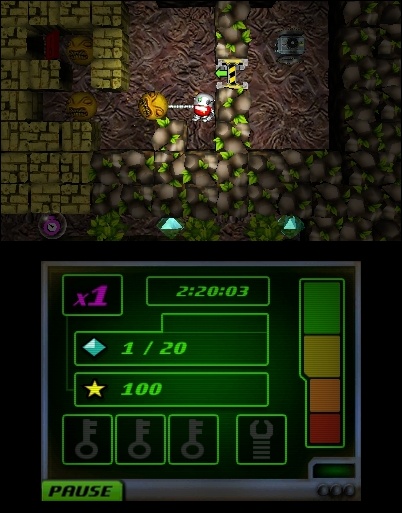 Visuals & Audio:
In terms of graphics, the game doesn’t seem to be stretching the handheld system to its limits but is facelift for Rockford and Crystal, whom you can actually tell are robots now. With its cute music, the game even manages to give a blank-faced robot a tiny personality. Sound effects, on the other hand, are a no-no due to the frequency with which you collect or smash things, though thankfully you can switch sound effects off separately from the music.

Overall:
Asking me to give the game a score and tell you whether it’s worth buying or not places me between a rock and a hard place. It’s definitely one of the more subjective games I’ve played of late in that it will appeal to some through aspects which others will detest. For me, its quality lies in the Puzzle mode – not conventional Boulder Dash territory but a slow, considered pace seems to suit it. One thing you can be sure of is that your money would be better spent on the cheaper XBLA version of Boulder Dash XL if you have got your eye on it; the 3D doesn’t add much, and the visuals undoubtedly look better on a more powerful machine and bigger screen. Plus, playing something bite-sized on the go like this is available at a fraction of the cost in this day and age through the Apple Appstore.